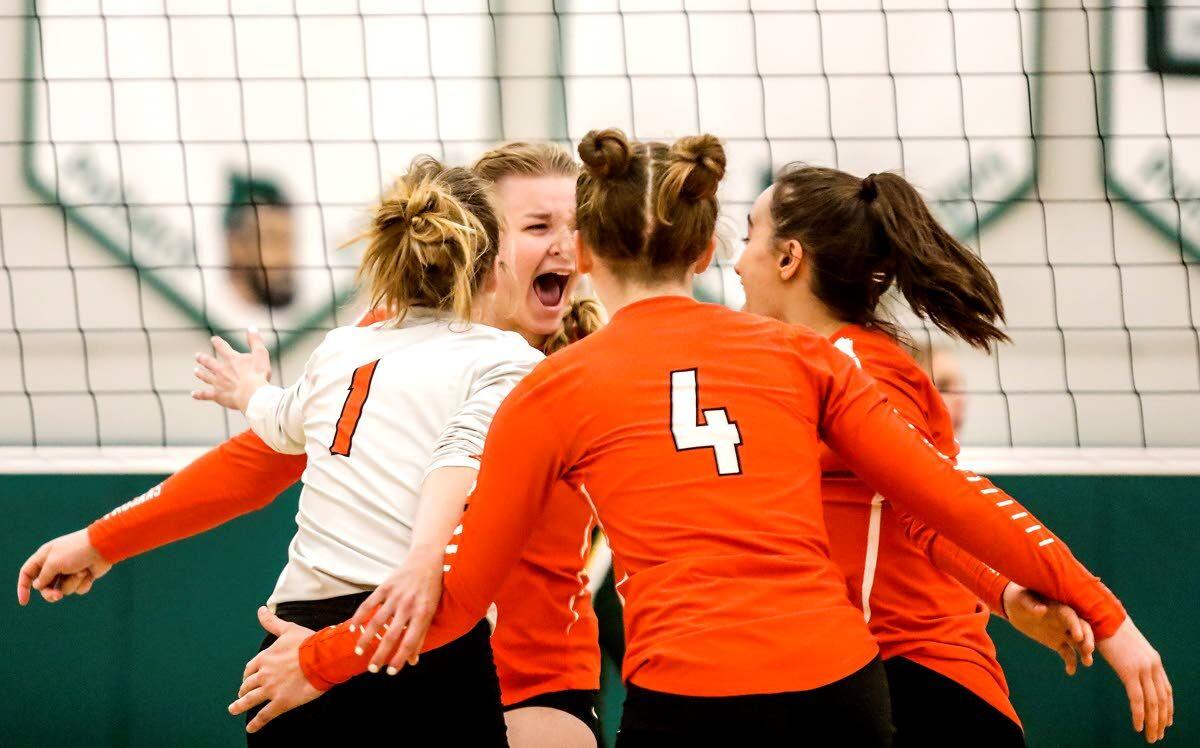 Troy celebrates a point in its game against Potlatch on Tuesday at Potlatch High School. 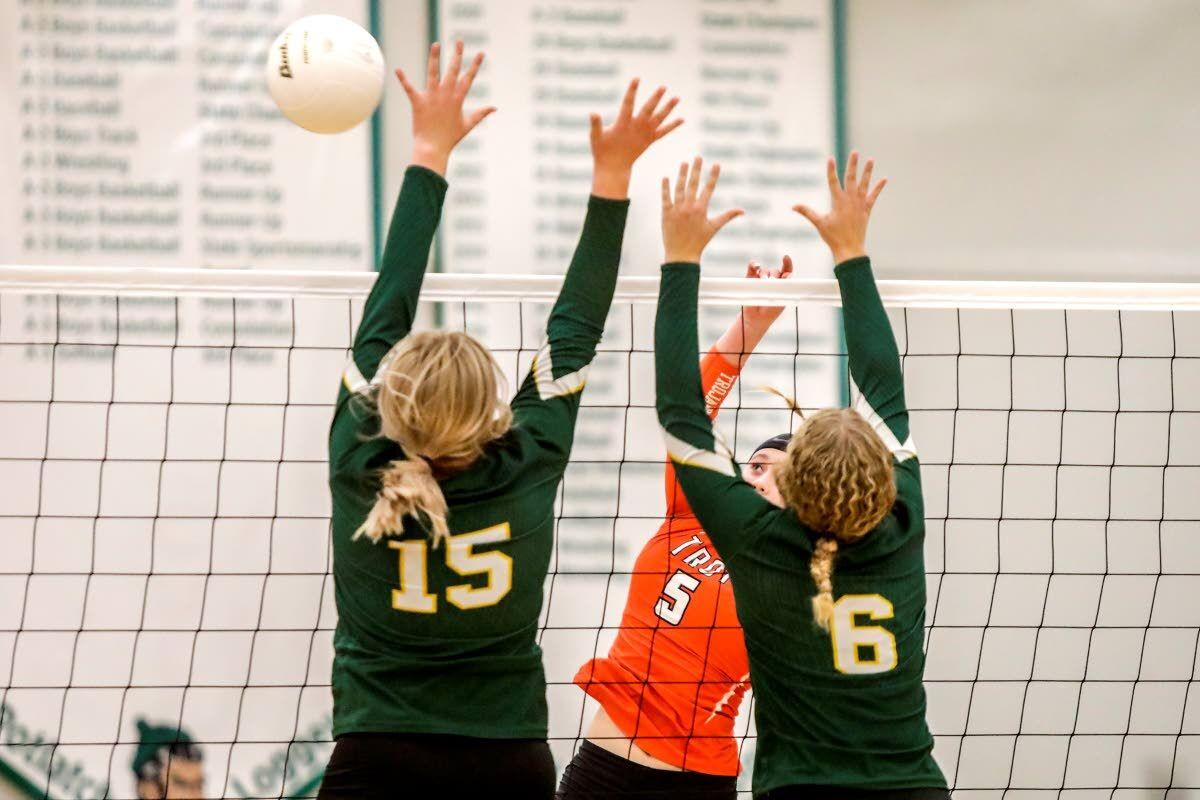 Troy outside hitter Morgan Blazzard spikes the ball past the fingertips of Potlatch middle blocker Jordan Reynolds (15) and outside hitter Ali Akins. 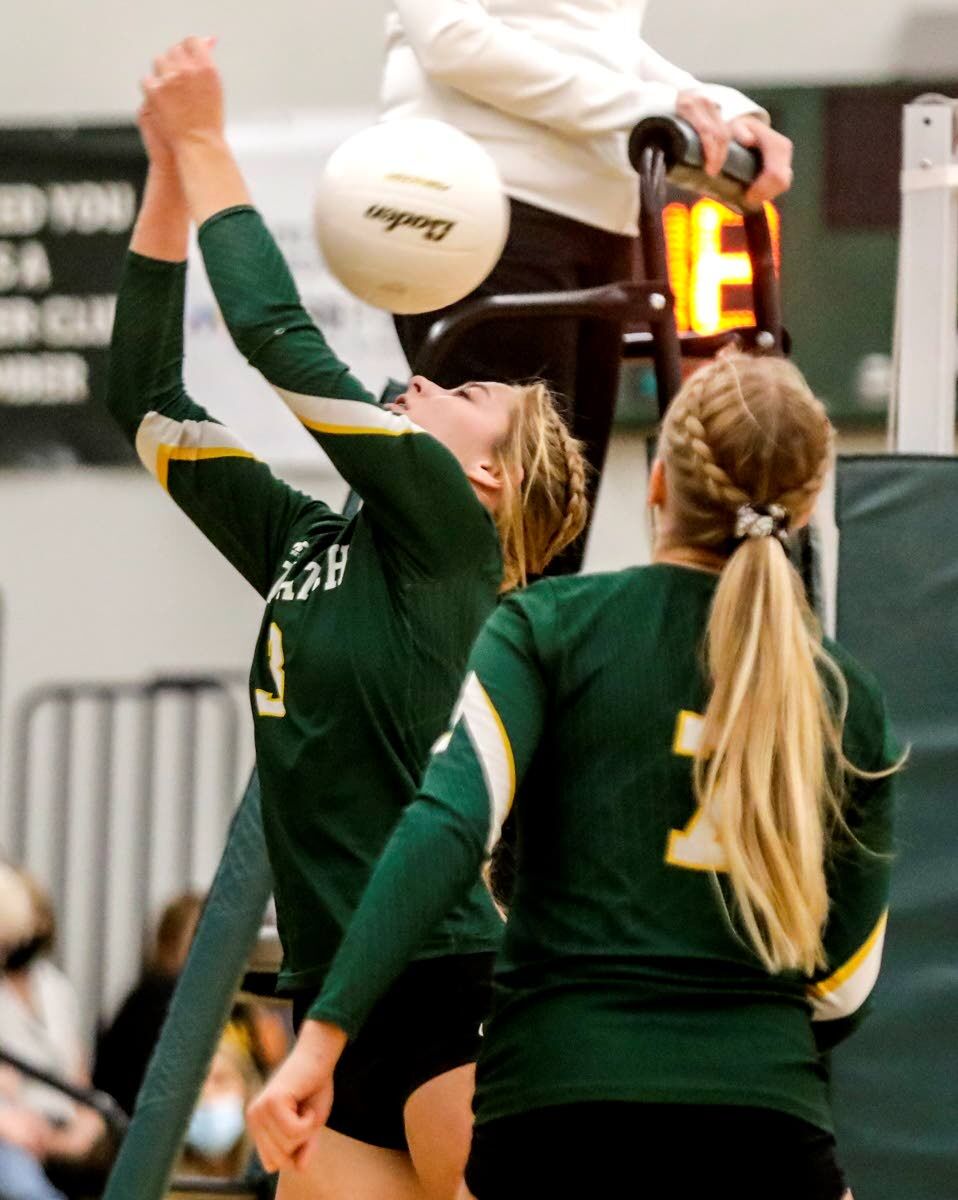 Potlatch outside hitter Brooke Peterson hits the ball behind her back into play on Tuesday.

Troy celebrates a point in its game against Potlatch on Tuesday at Potlatch High School.

Troy outside hitter Morgan Blazzard spikes the ball past the fingertips of Potlatch middle blocker Jordan Reynolds (15) and outside hitter Ali Akins.

Potlatch outside hitter Brooke Peterson hits the ball behind her back into play on Tuesday.

POTLATCH — Troy finished out a perfect league campaign with a 25-10, 25-23, 25-11 win Tuesday against Potlatch to finish the regular season alone in first place in the Whitepine League Division I volleyball standings.

“I thought we stayed committed to the game plan, and we were able to finish each rally with a kill,” Troy coach Debbie Blazzard said. “I got to give credit to Potlatch, they were serving extremely well and they were able to knock us out of our spots at times especially in the second set.”

With the victory, the Trojans (24-4, 14-0) secured the top seed in the Class 1A Division I district tournament, which begins Saturday. The Loggers (14-2, 12-2) will be the No. 2 seed. Each team will host the first two rounds of the tournament before play shifts to the Lewis-Clark State College Activity Center starting next Tuesday.

Each time Potlatch would hit a ball over the net, it seemed as if the Trojans had an answer despite the boisterous crowd on the side of the Loggers.

Senior Morgan Blazzard finished with 18 kills, including the final kill in each set for the Trojans.

“She’s learning how to be smarter with the ball instead of hitting it all over the place,” Debbie Blazzard said. “She’s looking for open spots and getting a lot of kills along the way.”

Morgan Blazzard said the Trojans’ unity on the court starts at practice.

“Every practice we start with an ‘I am’ statement,” she said. “Whether that be ‘I am a good hitter’ or ‘I am a great server’ and that’s what we focus on during the entire practice. Then, we do a lot of serve-receive work. As a smaller team, we know that’s super important so we put a big emphasis on it.”

In the second set, Potlatch was able to put Troy on its heels. But a Jolee Ecklund and Blazzard kill won the set for the Trojans during the final stretch.

“In the second set, we played like we’re capable of playing,” Potlatch coach Ron Dinsmoor said. “After the first set, I told them ‘It’s not your birthright to let Troy walk all over you.’ I said, ‘We have to fight. If they punch you in the mouth, you have to punch back.’ Troy is a mentally and physically tough team. You can’t get into holes like that against them.”

For Potlatch, Ali Akins was a perfect 7-for-7 at the service line with an ace and eight digs.

Now, the trek toward the state tournament, which takes place Oct. 29-30 at LCSC’s Activity Center, begins.

“I’m excited to have the first seed spot but, it’s a whole new season now,” Deborah Blazzard said. “It feels nice to have this win but at the same time everyone is 0-0 now and anyone can go to the state tournament. We have to tighten up.”