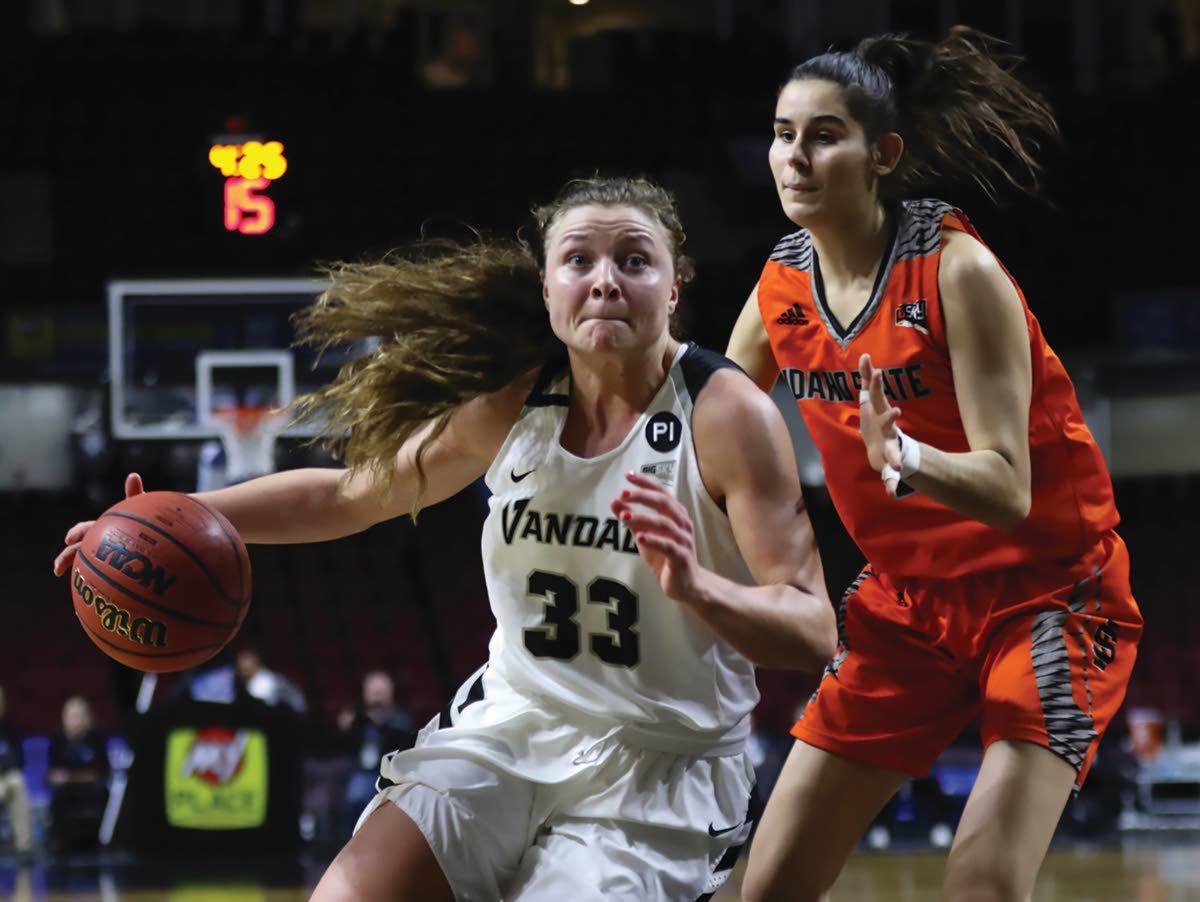 Brooks Nuanez/Big Sky ConferenceIdaho’s Lizzy Klinker left drives around Idaho State’s Nuria Barrientos during a Big Sky women’s basketball tournament semifinal game March 11 at CentruyLink Arena in Boise. Klinker scored 13 points in the Vandals’ win, which ended up being the last for the Idaho senior and the team as the tournament was canceled because of the coronavirus. 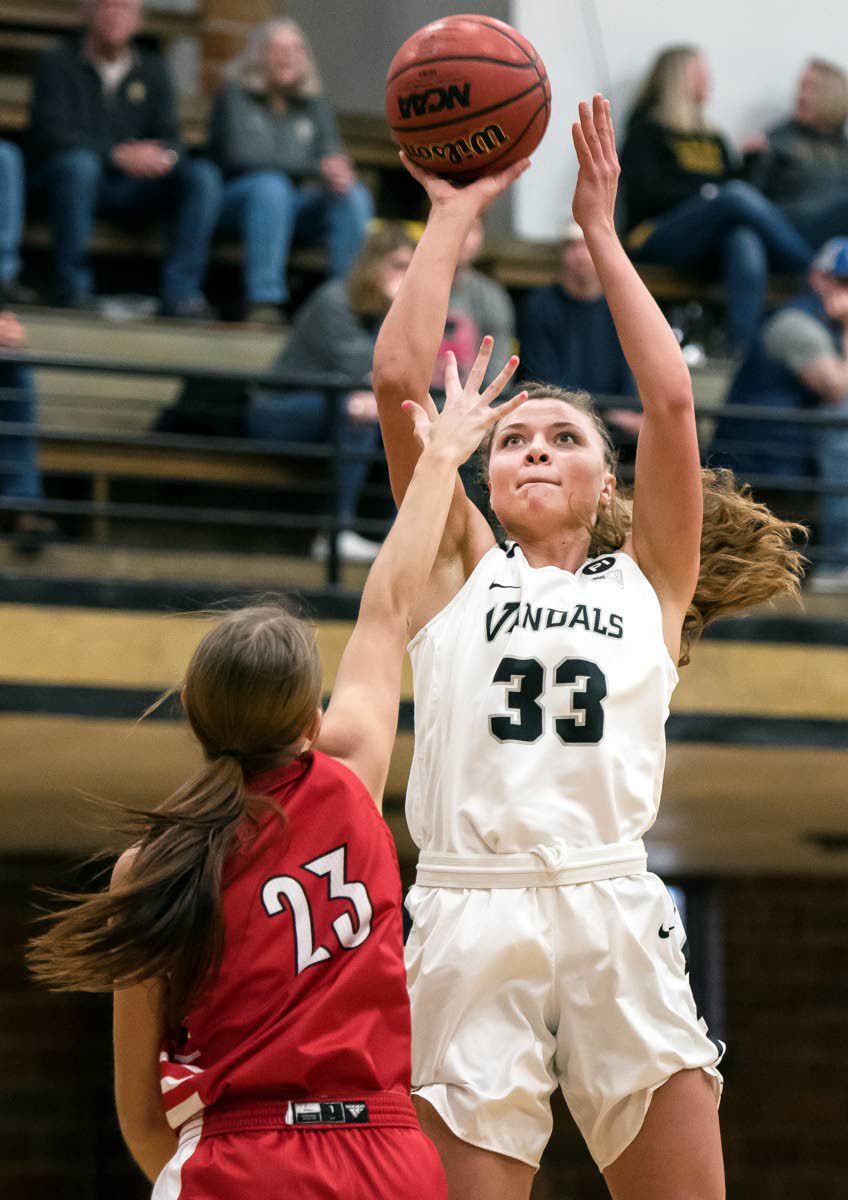 Brooks Nuanez/Big Sky ConferenceIdaho’s Lizzy Klinker left drives around Idaho State’s Nuria Barrientos during a Big Sky women’s basketball tournament semifinal game March 11 at CentruyLink Arena in Boise. Klinker scored 13 points in the Vandals’ win, which ended up being the last for the Idaho senior and the team as the tournament was canceled because of the coronavirus.

Going into the season, coach Jon Newlee and the Idaho women’s basketball team faced the unprecedented task of replacing 41 points per game lost with the graduation of Splash Sisters Mikayla Ferenz and Taylor Pierce.

The Vandals were fresh off a 22-win season and a Sweet 16 appearance in the WNIT, but questions about who would step up persisted if the Vandals were to match their 2019-20 campaign.

Instead, they were poised to surpass it.

Despite a season cut short because of the coronavirus pandemic, Idaho finished 22-9 and ended with a win for the first time in Newlee’s career — something he can laugh about now considering he’s “never won a national championship.”

The Vandals transformed into a savvy defensive team that led the Big Sky Conference in scoring defense and finished second in the league in the regular season.

It was a reload rather than rebuild.

“We just kind of reinvented ourselves as a defensive-minded unit instead of the high-octane, fun-and-gun group we had been the last few years,” Newlee said. “It was great to see the progression go forward with this young team.”

Idaho was one of just two teams alive in the Big Sky tournament when it got the news the tournament was canceled March 12 — one day before the championship was to take place against regular-season champ Montana State.

The Vandals had split their regular-season meetings with the Bobcats and were confident going into the game after a big win against Idaho State in the semifinal round.

“For it to just be taken away, not to have that shot to get back to the Big Dance, was heartbreaking for everybody involved.”

Newlee said many tears were shed and hugs shared at an emotional locker room meeting after the news broke of the cancellation.

“It was the toughest meeting I’ve ever had ... to have to tell them that it was over,” Newlee said.

It was a heartbreaking ending for UI’s two seniors — Lizzy Klinker and Isabelle Hadden. Klinker’s gritty toughness was key all season in Idaho’s transformation into a defensive-powered team. She also was second on the team in scoring (12.8 points per game) and rebounding (6.6), and finished with 13 points in the Big Sky semifinal-round game against the Bengals despite suffering a bad ankle sprain in the quarterfinal round March 10 against Portland State.

Hadden, a Boise native, was a leader and key contributor off the bench, averaging 5.5 points per game.

But the Vandals will return a plethora of weapons next season, when they hope to finish what they started.

Big Sky first-teamer Gina Marxen is a tireless, do-it-all guard and lockdown defender. The soon-to-be junior’s 3-point shooting took a dip from her freshman year, but she still led the team with 13.3 points per game.

Third-team honoree Beyonce Bea will look to expand on the 12.2 points per game she averaged in her freshman campaign. At 6-foot, Bea allows Newlee to mix and match his lineups since she can guard every position.

Newlee said the turning point of the season came after back-to-back losses at the Sharelso Holiday Beach Classic in San Luis Obispo, Calif., against two teams the Vandals “should have beat” — Lamar University and Old Dominion.

The team regrouped with a laid-back wiffle all game at the beach near Newlee’s hometown of San Diego.

“It really just kinda set everybody back at ease,” Newlee said.

The next day, the Vandals beat San Diego by 33 points.

“I feel like that’s what really turned it around for us,” Newlee said. “From that point, we just kept getting better and better.”

Idaho went on to go 15-5 in Big Sky play and finish second in the conference in the regular season. It’s yet to be seen if the Big Sky will name UI and Montana State co-champions of the unfinished tournament.

Now, in the offseason, there are more unknowns. NCAA teams are prohibited from recruiting activities until at least April 15 and offseason spring workouts are in doubt as organizations and communities limit social contact because of the pandemic.

“There’s so much uncertainty right now that we’re just all kind of waiting,” Newlee said. “Waiting is all we can do.”