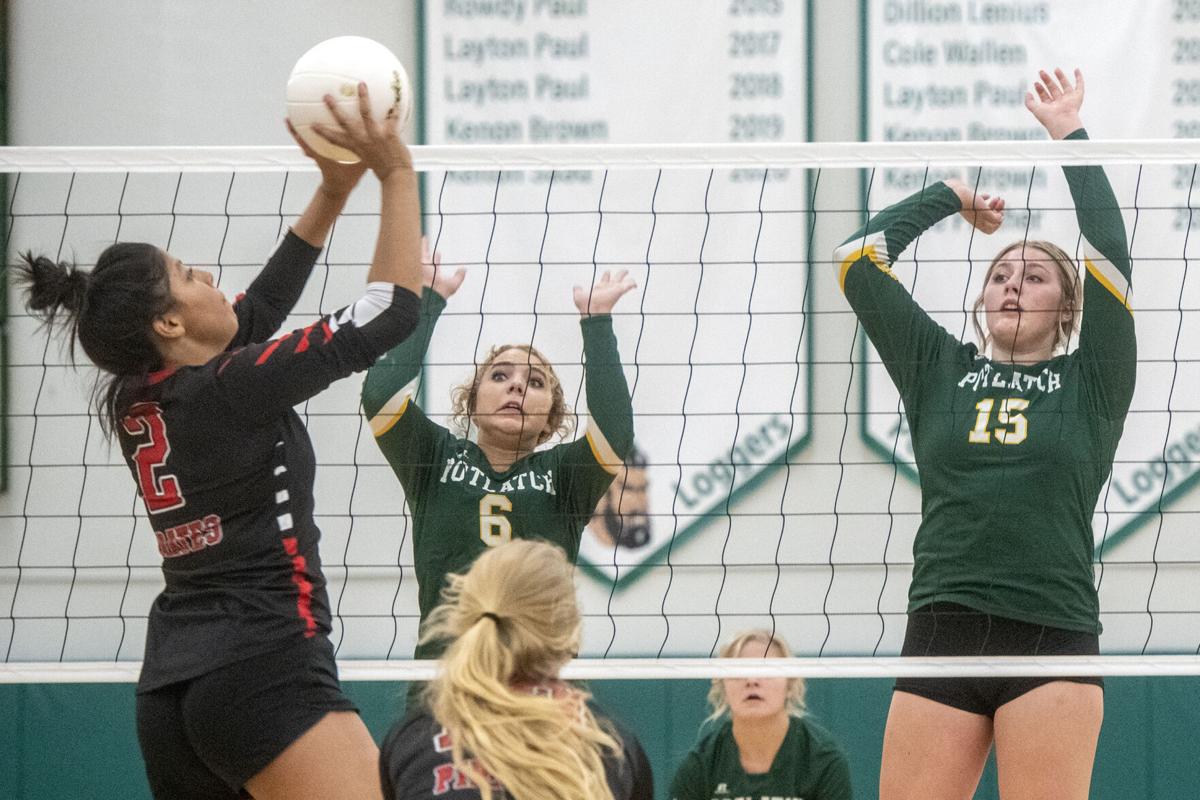 Prairie’s Trinity Martinez, left, hits the ball over the net as Potlatch’s Ali Akins, center, and Jordan Reynolds defend during the first set of a Whitepine League Division I match Tuesday. The Loggers host Troy at 7 p.m. Tuesday. 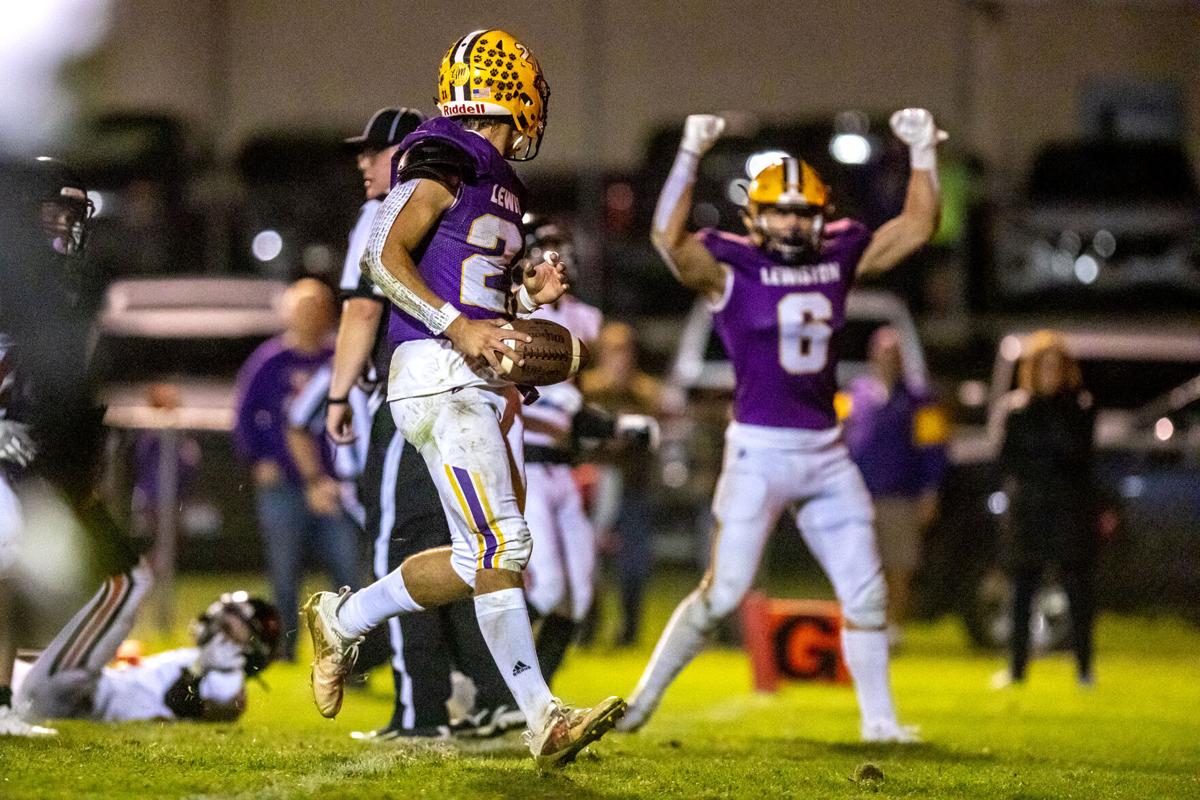 Lewiston running back Cruz Hepburn runs into the end zone to score during the Bengals' 30-29 win Friday against Post Falls.

Prairie’s Trinity Martinez, left, hits the ball over the net as Potlatch’s Ali Akins, center, and Jordan Reynolds defend during the first set of a Whitepine League Division I match Tuesday. The Loggers host Troy at 7 p.m. Tuesday.

Lewiston running back Cruz Hepburn runs into the end zone to score during the Bengals' 30-29 win Friday against Post Falls.

Postseason play begins in earnest this week as the Idaho district soccer and volleyball tournaments start to heat up. Also, high school football will take center stage at the end of the week as there are a couple of big games on the docket.

Here's a look at what you need to know as the week begins:

Lakeland at Moscow (Class 4A boys' soccer district tournament semifinal), 3:30 p.m.: Each team has struggled this season, registering just two wins betweem them (the Bears have both, and they haven't won since late August). Only one can survive and advance to play in the district final at 3:30 p.m. Wednesday at 7-4 Sandpoint.

Lewiston at Lake City (Class 5A boys' soccer district final), 3:30 p.m.: The winner automatically earns a berth in the state tournament, which takes place Oct. 21-23 at Eagle High School in the Boise area. The loser will play in a play-in game at 3 p.m. Saturday against District III's fifth team. The Bengals (7-7) stunned Coeur d'Alene (10-3) on Saturday on the road, getting a pair of goals from playmaker Teddy Kessler. Lewiston has lost to the Timberwolves (16-0-1) in at least their past 22 matches dating to the 2013 season.

Troy at Potlatch (Whitepine League Division I volleyball regular-season finale), 7 p.m.: The Trojans have been the most dominant team in the state in the classification the past several years, winning two Class 1A Division I titles the past three seasons and four in the previous six. On the doorstep is the Loggers, who have been seemingly trying to break into the Troy-Genesee monopoly in the district. Troy (15-3, 13-0) is led by Morgan Blazzard, one of the state's premier players, but she has a capable cast behind her. Potlatch (14-1, 12-1) is paced by Olivia Wise, Jordan Reynolds and Josie Larson. Is it the Loggers' time to shine, or do the Trojans still rule the roost?

West Valley at Clarkston (Class 2A Greater Spokane League girls' soccer), 4 p.m.: The Bantams (9-3, 5-1) suffered their lone league loss Sept. 28 in Spokane, when the Eagles (11-1, 6-0) put up two second-half goals in a 3-0 victory. Luella Skinner is one of the area's top players, and goalkeeper Erika Pickett has stood on her head throughout the season. Coach Ryan Newhouse has been pointing to this game for at least 12 days.

Prairie at Genesee (Whitepine League Division I football), 7 p.m.: The Pirates (6-0, 5-0), who probably will remain at the No. 2 spot when the state media poll is released Tuesday, gets a second consecutive final exam by travelling to play the Bulldogs (5-1, 5-1), who are a bit of a surprise, although Genesee was 4-2 a year ago when COVID-19 concerns shut down the program. Prairie is steady as it comes, with running backs Brody Hasselstrom and TJ Hibbard leading the way. The Bulldogs are led by two sets of brothers, the Jordans and the Warehams. Is now the time the Pirates get knocked off their perch, or do they summon up another performance and continue their years-long dominance in the division?

Lewiston at Lake City (Class 5A Inland Empire League football), 7 p.m.: There's a slight possibility the Bengals (6-1, 1-0) could move back into the state media poll in two days after finally swatting away the pest that had been Post Falls (3-4, 0-1). This is Lewiston's best start since 2018, and clearly its best team since the 2016 team started the season 9-0, only to lose in the first round of the state playoffs. With a shot at the postseason on the line a year ago in the final week, the Bengals came up short against the Timberwolves (2-4, 0-1). Now, they'll be looking for some revenge.

Whitepine League Division I and II district tournaments start. The road to the state tournament, which will take place at Lewis-Clark State and Lewiston High School in Class 1A Division I and Division II, respectively, begins. Troy, Genesee and Deary made the state a year ago. Do those three make a return appearance, or does someone have a Cinderella run in them?