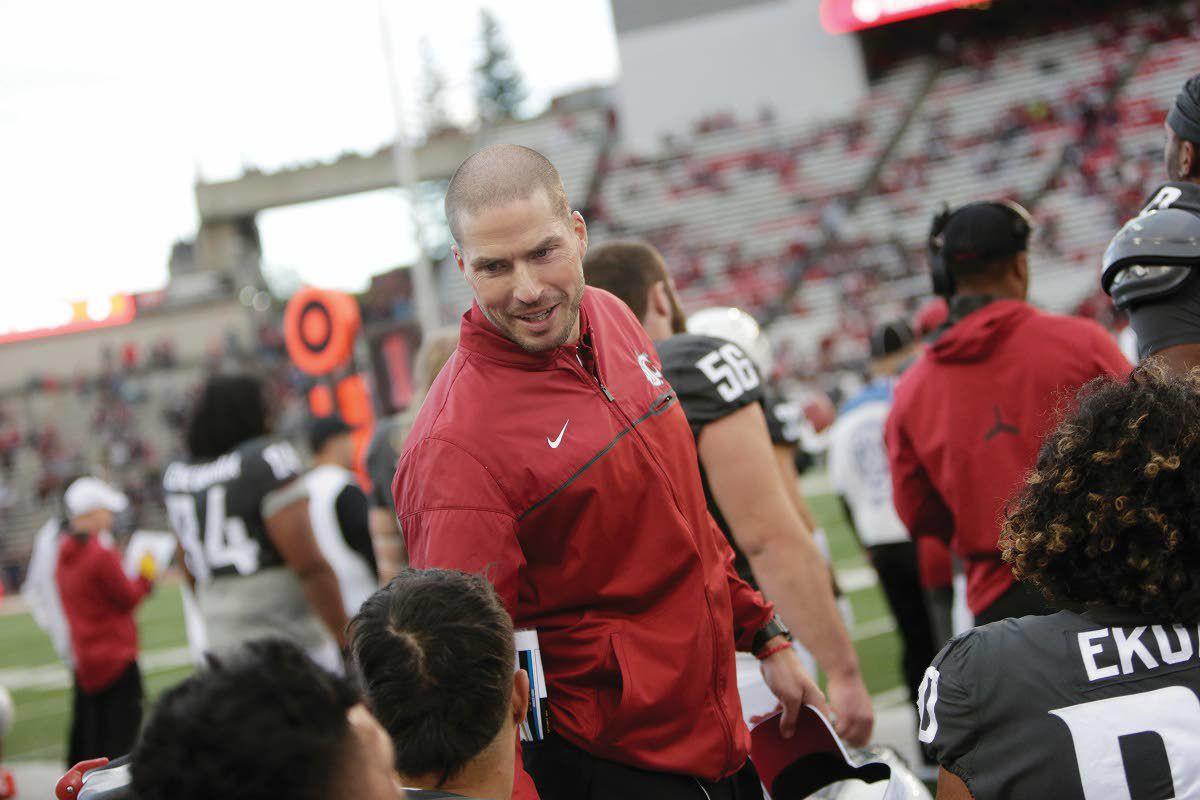 Former Washington State defensive coordinator Alex Grinch speaks with his players during the second half of a game against Nevada on Sept. 23, 2017, in Pullman. Grinch could be a possible candidate to replace Leach at WSU. 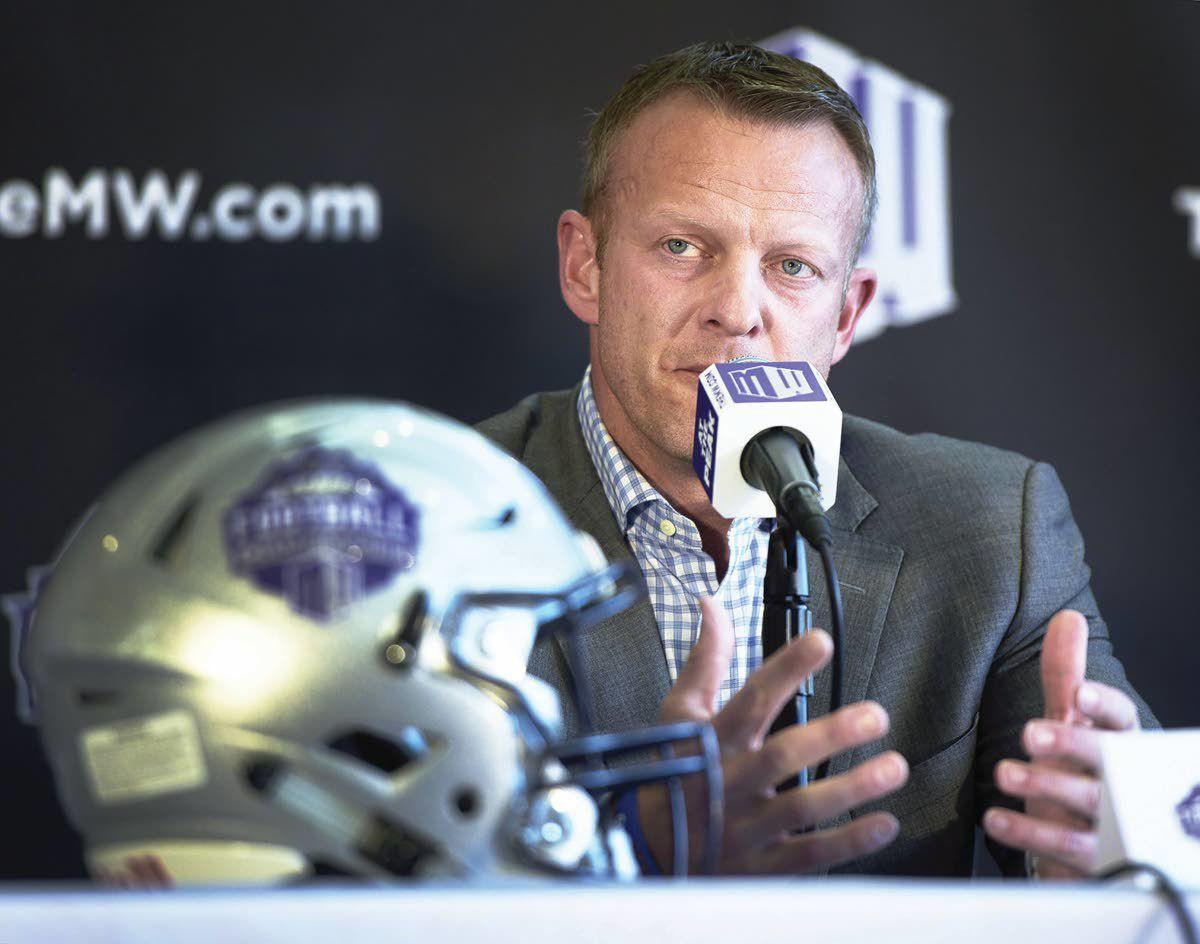 Idaho Press For now, Bryan Harsin looks to remain as Boise State's coach. But he would like to see the university make some upgrades to the program.

Former Washington State defensive coordinator Alex Grinch speaks with his players during the second half of a game against Nevada on Sept. 23, 2017, in Pullman. Grinch could be a possible candidate to replace Leach at WSU.

Idaho Press For now, Bryan Harsin looks to remain as Boise State's coach. But he would like to see the university make some upgrades to the program.

Washington State athletic director Pat Chun said Thursday he will take his time to hire the right person to be the next head football coach at the school.

In four previous coaching searches since arriving in Pullman in January 2018, Chun has hired a defensive-mindedwizard in men’s basketball coach Kyle Smith, and a mid-major gem on the rise in baseball coach Brian Green, along with women’s basketball coach and former University of Texas standout Kamie Ethridge, and swimming coach Matt Leach.

But now comes Chun’s biggest test of all. When he was athletic director at Florida Atlantic, Chun landed a big fish in Lane Kiffin. All Kiffin, who previously flamed out as head coach with the Oakland Raiders, Tennessee and USC, did was register two 10-win seasons, restoring his name to respectability, and it led to him being named head coach at Mississippi on Dec. 6.

Now, Kiffin and former WSU coach Mike Leach will match wits at the end of every regular season in the annual Egg Bowl rivalry game.

Chun has proven he can make the big hire. But for him, it’s all about fit.

“We don’t want to put any type of parameters on what we’re going to try to do,” Chun said. “There is a reality here at Washington State, if you can go find the right coach, and history shows that, whether it’s Mike Leach, Mike Price, Tony Bennett, George Raveling, if you gotta go find the right coach to win at Washington State, we’re going to do that.

“The goal is to find the best coach possible.”

With that in mind, here’s some possible candidates who could replace “The Pirate” on the Palouse:

This would seem to be a natural fit. He previously was the Cougars’ defensive coordinator from 2015-17 before moving on to Ohio State. Grinch currently is the defensive coordinator at Oklahoma, where he helped the Sooners improve from 101st in the Football Bowl Subdivision in total defense in 2018 to 38th this season.

While with Washington State, his defenses ranked 73rd, 50th and 59th.

This probably is a popular pick with the fan base, and might be the top target for Chun as of right now, considering the way the WSU defense played for the better part of this past season. However, one downside is no one knows for sure what kind of offense he’d install, or if he’d keep some version of the Air Raid.

The former quarterback who played at Texas Tech when Leach was coach also has ties to Pullman. He was the offensive analyst and outside receivers coach in his time at WSU, which was the 2014 and 2015 seasons. Harrell left to become offensive coordinator at North Texas under Seth Littrell. He led the Mean Green, who had been ranked in the bottom half of the country in passing, total yards and points in 2015, to top 30 rankings in all three categories in 2017 and 2018. Now as USC’s offensive coordinator, he helped the Trojans rank third in the Pac-12 in scoring with a variation of Leach’s offense.

This probably would be the hire with the least amount of player turnover.

Admittingly, this might be a bit of a stretch. However, he was one of, if not, the hottest names on social media surrounding the opening a few hours after the announcement. Harsin, the Boise State coach, has won 10 or more games in five of six seasons he’s led the Broncos. As B.J. Rains, Boise State beat writer for the Idaho Press, said on Twitter, “... you would think it might make more sense than some of the other jobs he’s been mentioned for.” But it might be hard to pry him away, considering it’s his alma mater and he was born and raised in Boise.

Would Chun be willing to do a complete 180 and change offensive philosophies? Calhoun, Air Force’s coach, clearly has had success, as the 31-21 result against the Cougars in the Dec. 28 Cheez-It Bowl would indicate. Also, he’s 98-69 with 10 appearances in a bowl game in Colorado Springs. Calhoun has shown a willingness to adapt to his personnel in the past, but would he be able to be lured away from his alma mater? Probably a long shot, but Calhoun eventually deserves a chance at a Power Five gig.

The coach at Hawaii has a similar offensive philosophy and the Rainbow Warriors have won at least seven games in three of Rolovich’s four seasons. Hawaii went 10-5 this past season. But is he ready for the rigors of leading a Pac-12 program?

The rest of the field

Although he was just hired, Cal Poly coach Beau Baldwin possibly could get some run. Baldwin formerly was Eastern Washington’s coach. ... Weber State coach Jay Hill has won 10-plus games each of the past three seasons and led the Wildcats to the semifinal round of the Football Championship Subdivision playoffs this season. ... The man Leach is replacing, Joe Moorhead, had a good run at Fordham and was Penn State’s play-caller for two seasons. Some think he didn’t get a true opportunity in Starkville.