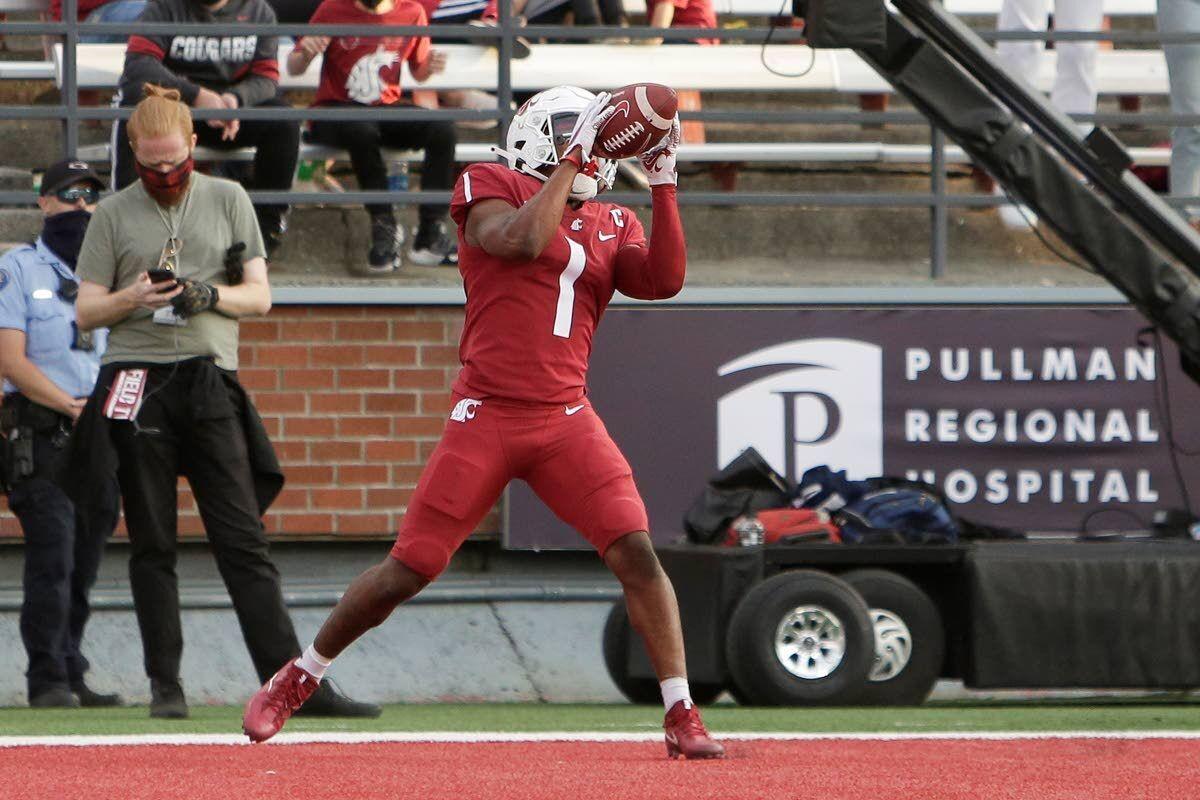 Washington State receiver Travell Harris catches a touchdown pass during the second half against Portland State. Harris had six catches for 80 yards and two scores in the Cougars’ 44-24 win against the Vikings. 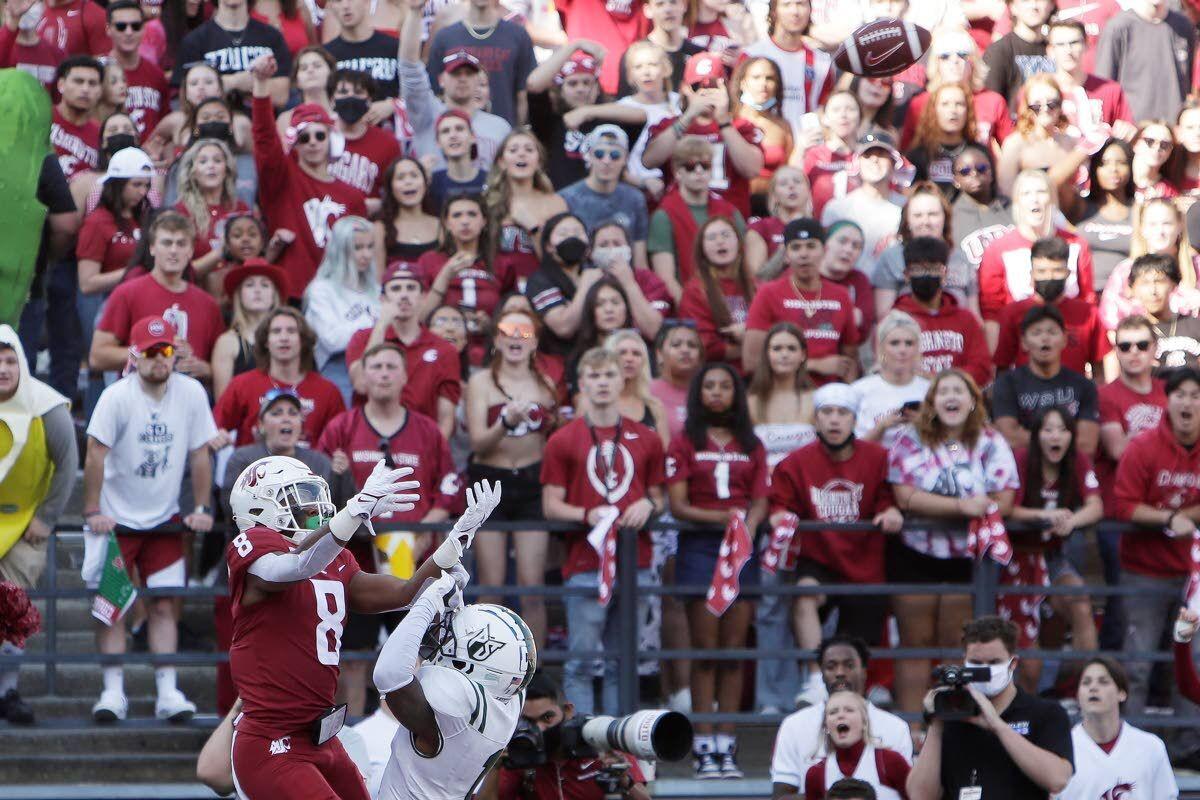 Washington State receiver Travell Harris catches a touchdown pass during the second half against Portland State. Harris had six catches for 80 yards and two scores in the Cougars’ 44-24 win against the Vikings.

Also back was the satisfaction of victory.

Jayden de Laura passed for 303 yards and benefited from a revived ground attack Saturday as the Washington State Cougars thumped Portland State 44-24 in a nonconference football game, easing frustrations from a season-opening loss to Utah State.

It was the Cougs’ first win in five games stretching back to last season, and their first lopsided victory since a 49-22 decision against Stanford in November 2019.

“We felt the pressure going in,” WSU linebacker Jahad Woods said. “We knew we needed to win this game. It didn’t matter who it was — it could have been Portland State or whoever. We had that pressure on us all week, and we came through.”

De Laura, in his best passing performance since he wrested the starting role as a true freshman last year, went 21-for-29 for three touchdowns, including spectacular ones by Calvin Jackson Jr. and Travell Harris. True freshman De’Zhaun Stribling also made a stellar snag as receivers justified de Laura’s sometimes harrowing boldness.

Cougars coach Nick Rolovich said de Laura’s performance was “even better” than the previous week, when he’d entered as an injury replacement and provided a fruitless spark.

“I think he’s really settling in,” Rolovich said. “He had some throws — I had to close my eyes on the one to Calvin. What a great catch he made. But (de Laura) has a way of keeping the defense on their toes.”

In contrast to so many games of the past decade, the Cougars’ aerial display worked hand-in-hand with a 159-yard rushing output that included 64 yards from Deon McIntosh and 59 from Max Borghi.

On a sunny afternoon before another student-heavy crowd of 22,651 — the second Wazzu home crowd since the Pac-12 lifted its pandemic-prompted ban on spectators — the Cougars (1-1) bounced back from their 26-23 loss the previous week to a 17-point underdog. They needed a win so badly that it hardly mattered that the opponent, Portland State (0-2) belongs to the Football Championship Subdivison and the matchup was so hard-to-peg that bookmakers kept their distance from it.

The WSU defense did justice to its bend-don’t-break philosophy. Elusive Vikings quarterback Davis Alexander passed for 318 yards and ran for 62, but his team mustered only one touchdown until the final seven minutes.

“Washington State was a fast football team that played well and they were almost penalty-free,” Portland State coach Bruce Barnum said. “They played zone (defense) and that prevented us from running the ball well. Good for them and their front seven.”

Alexander is “a really good player,” said Woods, who made five tackles, including one for loss. “He’s kind of like a Johnny Manziel. He makes plays all over the field. We knew that coming in. It was kind of difficult to contain him to be honest, but we came out with the win.”

The Cougars showed some early signs of hangover from the Utah State debacle, blowing a chance to pad a 7-0 lead when de Laura threw directly to Vikings cornerback Anthony Adams for an end-zone interception.

But after the Aggies tied it at 7, the Cougs found a rhythm they liked — mostly high-tempo — and put up 23 points in the second quarter.

“Just for this game, we did that to our advantage,” de Laura aid of the fast pace. “(The Vikings) couldn’t really set up or prepare for the next play. They were always scrambling around.”

Especially impressive were touchdown passes to Jackson, leaping for the catch in the back of the end zone, and Harris, lunging for a grab in traffic.

Harris finished with six receptions for 80 yards and two touchdowns, and contributed to the Cougars’ cushy field position with a 50-yard kickoff return and a 22-yard punt return.

An interception by Justus Rogers allowed the Cougs to push their lead to 30-10 on a short Dean Janikowski field goal on the final play of the first half.

Aside from putting the Utah State game in the rearview mirror, the Cougars delivered some long-deferred payback to Portland State, which had stunned them the previous time they played, 24-17, on Sept. 5, 2015.

JAYDEN DE LAURA was 21-for-29 passing for 303 yards, three touchdowns and one interception for the Cougars, hitting TRAVELL HARRIS six times for 80 yards and two scores and CALVIN JACKSON JR. three times for 77 yards and a touchdown. Harris also returned a kickoff 50 yards and punt 22 yards. DEON McINTOSH added 64 rushing yards and MAX BORGHI had 59. For Portland State, DAVIS ALEXANDER was 28-for-50 passing for 318 yards and two touchdowns and an interception by JUSTUS ROGERS.

Leading 14-7 in the second quarter, the Cougars make clear their intention of boosting their run game when they hand the ball three consecutive times to Borghi, then watch McIntosh carry for 16 yards. Harris then springs open for a 29-yard reception to set up McIntosh’s 16-yard touchdown charge.

The Cougars begin their Pac-12 schedule with a game at 12:30 p.m. Saturday against USC at Gesa Field.