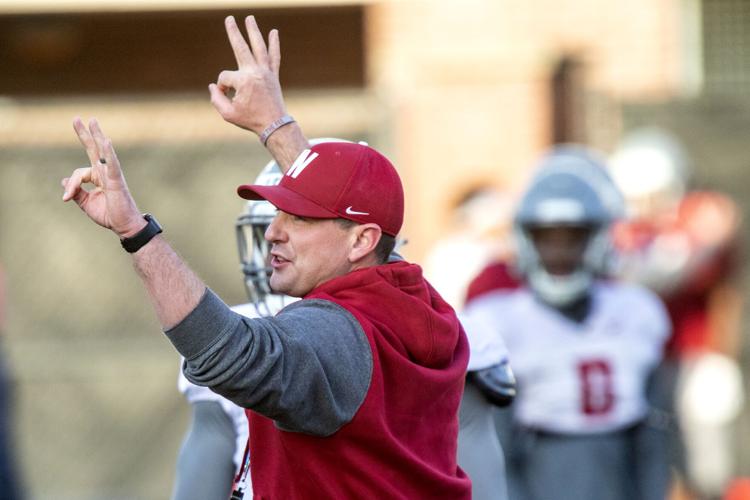 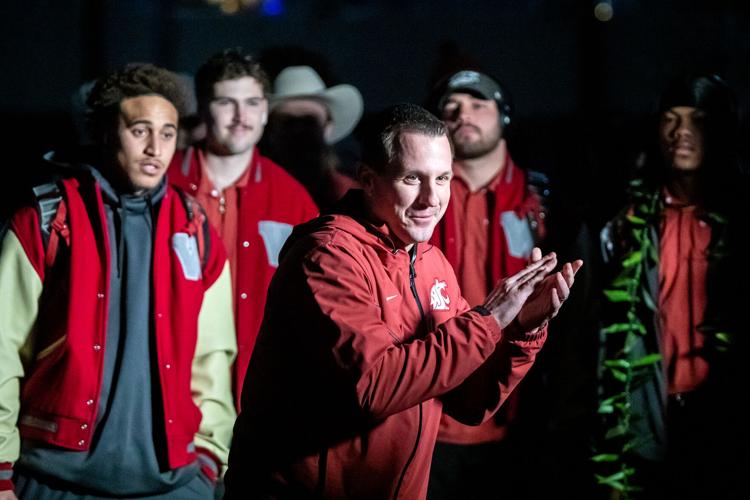 Washington State Head Coach Jake Dickert claps as his team exits the bus before the 2022 Apple Cup on Gesa Field in Pullman.

Washington State Head Coach Jake Dickert claps as his team exits the bus before the 2022 Apple Cup on Gesa Field in Pullman.

After signing several new assistant coaches during the past month, Washington State football coach Jake Dickert decided to put his own pen to paper.

The second-year coach announced Wednesday he signed a one-year contract extension, keeping him in Pullman through 2027.

Dickert originally was named WSU’s boss in November 2021 when he signed a five-year contract that ran through 2026.

“Just really excited to build on the foundation that we’ve built over the course of the last season,” Dickert said in his first comments of the new year. “I’d be remiss if I didn’t say a special thanks to a lot of players out there in my past and obviously present that have contributed to this.”

The Cougars are 10-9 with two bowl appearances since Dickert took charge on an interim basis midway through a chaotic 2021 season in which former coach Nick Rolovich was fired because of his refusal to get the COVID-19 vaccine.

Dickert was hired as WSU’s next coach after his Cougars trounced rival Washington 40-13 in the Apple Cup in Seattle on Nov. 26, 2021.

WSU finished the regular season 3-2 under Dickert before falling to Central Michigan 24-21 in the Sun Bowl.

Last season, Dickert’s first as the top guy, the Cougars went 7-6 with a standout victory against No. 19 Wisconsin early in the season. But WSU would go on to lose in the Apple Cup and again in their bowl game, this time to Fresno State in the LA Bowl.

However, Dickert is the first WSU coach in program history to lead the Cougars to bowl games in each of his first two seasons. The current Cougar bowl streak is at seven straight.

“We have watched Jake Dickert reset the foundation of WSU football that prioritizes family, selflessness, toughness, leadership and the total development of the young men on our football team,” WSU athletic director Pat Chun said in a news release. “Coach Dickert and the football staff strive to positively impact all those who come in contact with WSU football. We are fortunate to have coach Dickert leading Cougar football for many years to come.”

Dickert echoed the sentiment, saying he sees Wazzu as a long-term home for him and his family.

A Wisconsin native, Dickert played college football at NCAA Division III Wisconsin-Stevens Point, which is also where he got his coaching start in 2007.

He slowly worked his way up the coaching ranks to the Football Bowl Subdivision level, becoming safeties coach at Wyoming in 2017, 10 years after starting his journey at his alma mater.

Dickert, 39, was upgraded to defensive coordinator in 2019 with the Cowboys and was hired for the same spot at WSU in 2020.

His defensive prowess showed with the Cougars last season with the rise of linebacker Daiyan Henley, a Butkus Award finalist and prized NFL draft prospect, and WSU’s 22.9 points allowed per game were third-best in the Pac-12 Conference.

The next step for Dickert will be providing stability at the assistant coaching positions and he hopes he’s done that with new coordinators Ben Arbuckle (Western Kentucky) and Jeff Schmedding (Auburn).

Schmedding is an Eastern Washington graduate and Arbuckle is a small-town guy like Dickert. Arbuckle, 27, played quarterback for West Texas A&M at the NCAA Division II level.

“It has been really important to me to create stability,” Dickert said. “Obviously, you look from last year to this year and we didn’t quite do that. And that was the focal point of every hire going forward.”