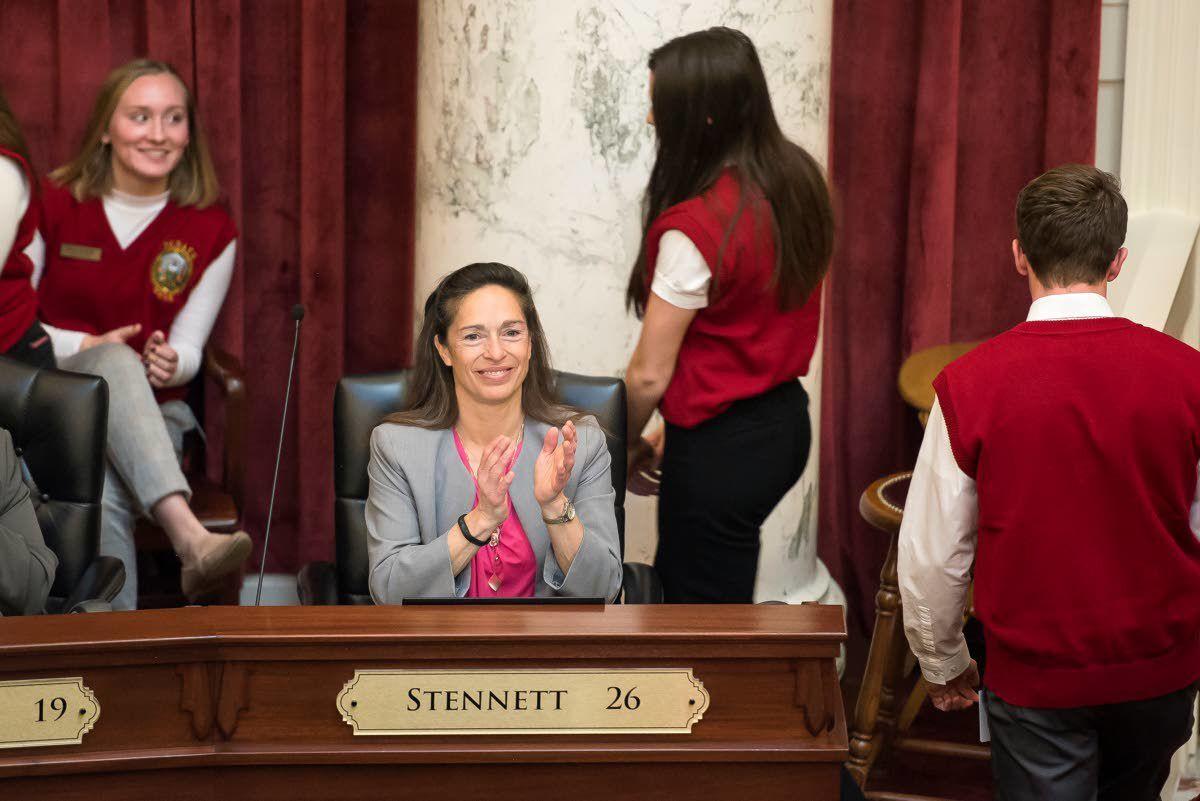 Idaho Sen. Michelle Stennett, of Ketchum, claps as the newly sworn-in pages file back to their seats at the Idaho State Capitol Building in Boise on Wednesday. 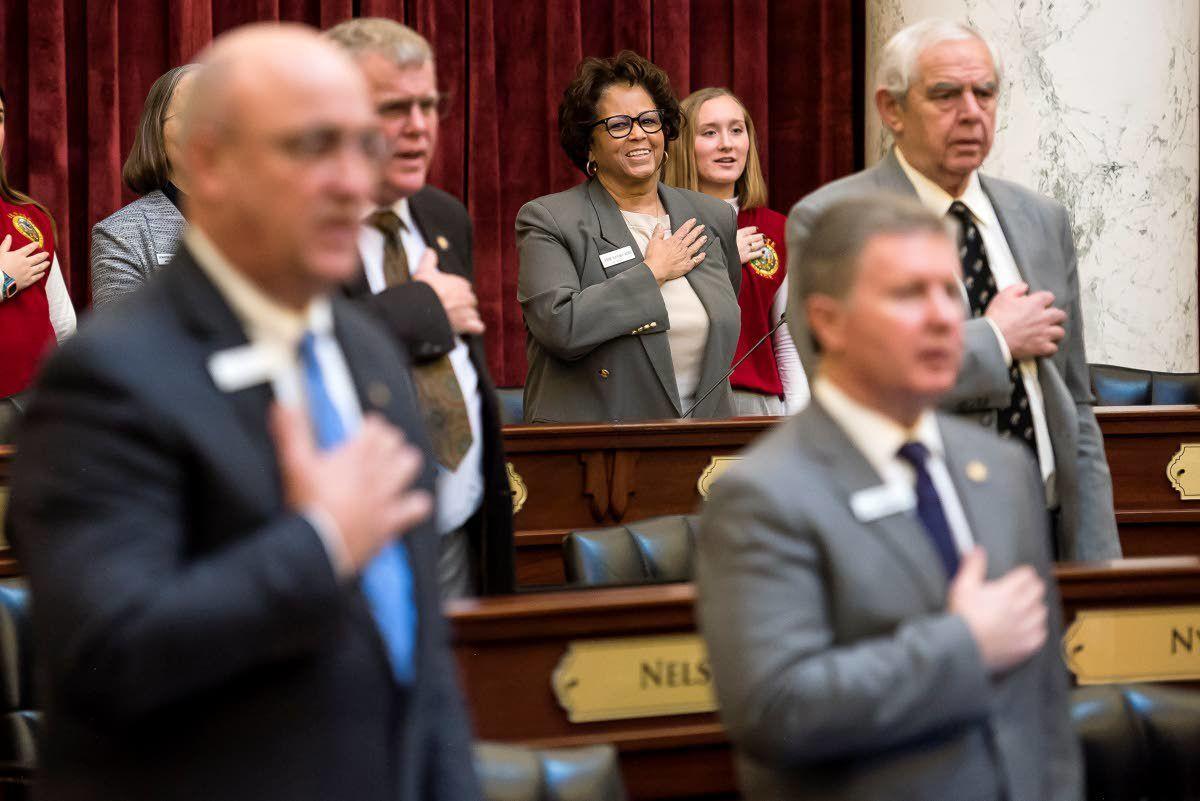 Sen. Cherie Buckner-Webb (center), of Boise, smiles as she says the Pledge of Allegiance at the beginning of an Idaho Senate floor session at the Idaho State Capitol Building in Boise on Wednesday. 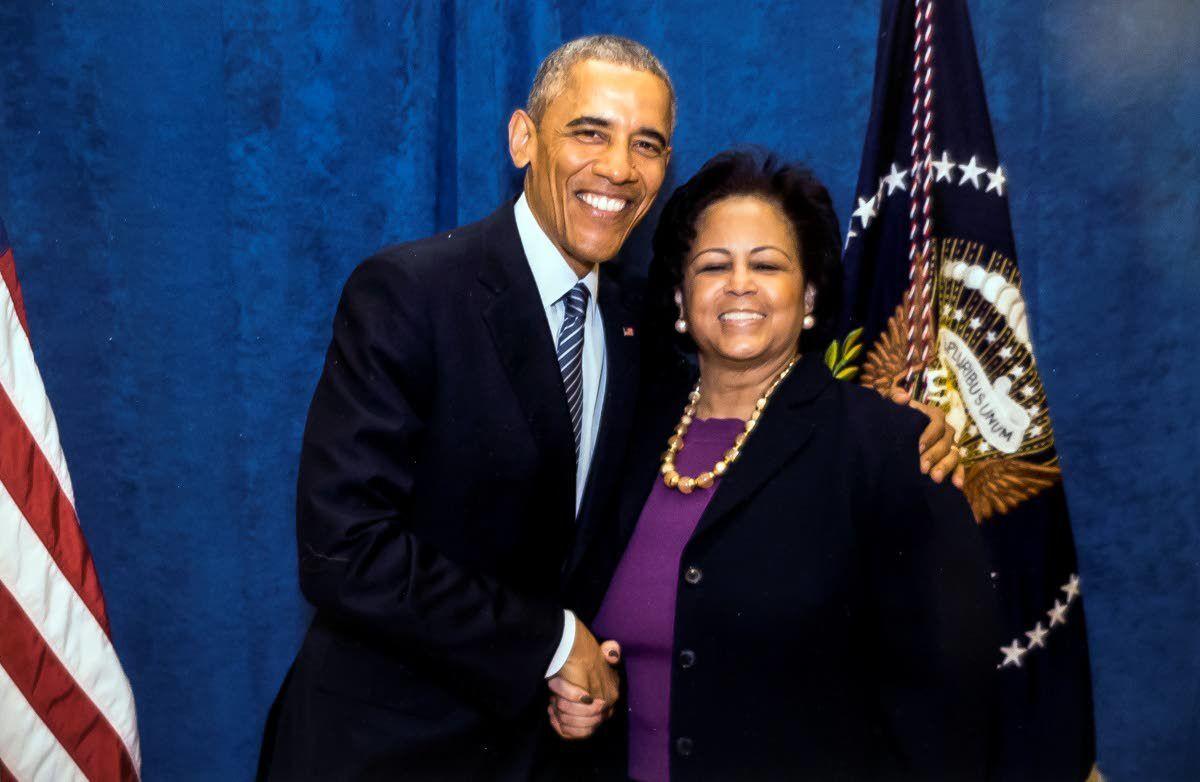 Idaho Sen. Cherie Buckner-Webb (right) poses for a picture with former President Barack Obama during his second visit to Idaho. 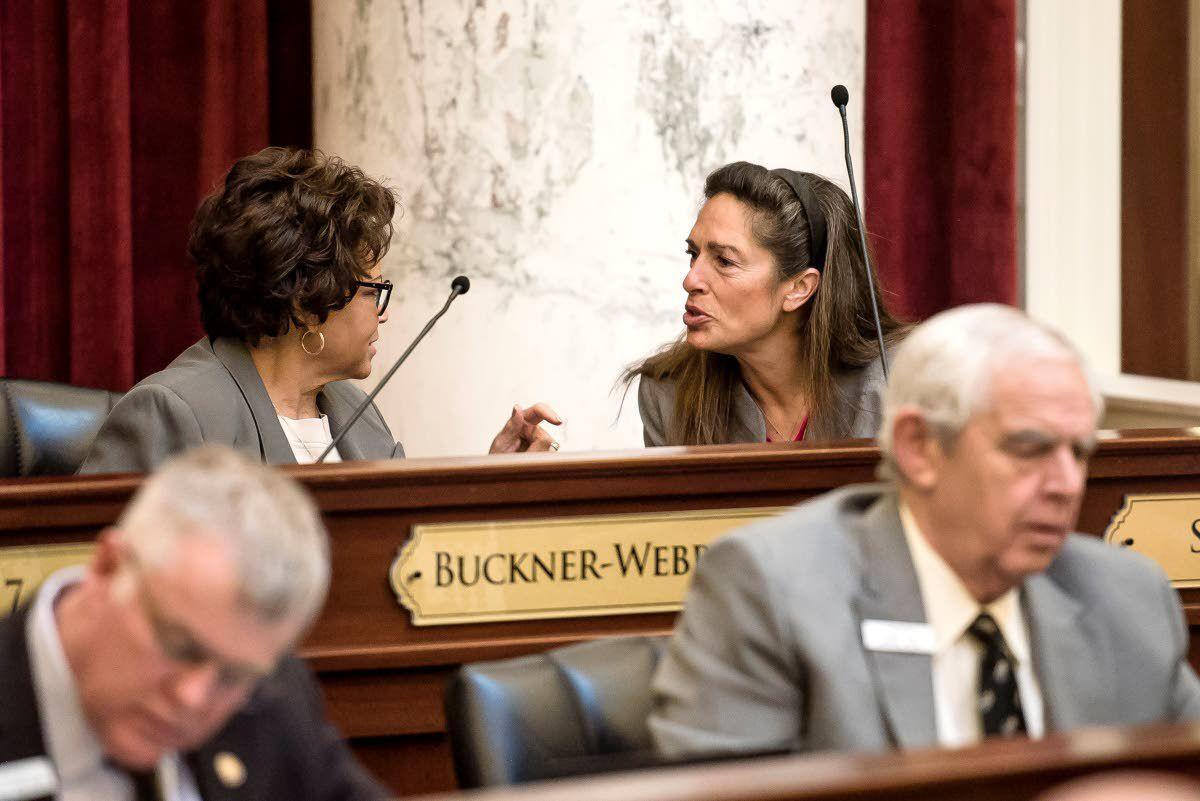 Idaho Sens. Cherie Buckner-Webb (left), of Boise, and Michelle Stennett, of Ketchum, talk during an Idaho Senate floor session at the Idaho State Capitol Building in Boise on Wednesday. 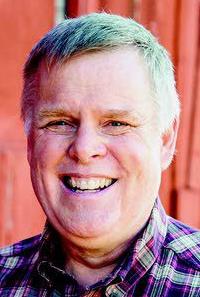 Idaho Sen. Michelle Stennett, of Ketchum, claps as the newly sworn-in pages file back to their seats at the Idaho State Capitol Building in Boise on Wednesday.

Sen. Cherie Buckner-Webb (center), of Boise, smiles as she says the Pledge of Allegiance at the beginning of an Idaho Senate floor session at the Idaho State Capitol Building in Boise on Wednesday.

Idaho Sen. Cherie Buckner-Webb (right) poses for a picture with former President Barack Obama during his second visit to Idaho.

Idaho Sens. Cherie Buckner-Webb (left), of Boise, and Michelle Stennett, of Ketchum, talk during an Idaho Senate floor session at the Idaho State Capitol Building in Boise on Wednesday.

BOISE — By her own admission, Michelle Stennett was “pitching a fit.”

That’s something few people in the Idaho Statehouse have ever seen, and probably can’t even imagine.

Stennett, the Senate Democratic leader, is one of the softest-spoken lawmakers in the building. She is always dignified, rarely raises her voice — rarely even displays her frustration at a legislative process that’s sometimes stacked against her caucus.

But 35 years ago, on a dirt road somewhere in Africa, she lost it.

“I was in western Kenya, near Lake Victoria,” Stennett said. “I caught a bus in Nairobi and ended up in the Great Rift Valley. The bus broke down for a couple of days.”

Stennett grew up in Wisconsin and earned a degree in international relations and environmental studies at the University of Oregon. After graduating, she spent two years working on disaster relief and rural development projects in Kenya, Ethiopia and Bangladesh.

She did not work in an office. She was out in the field, riding camels and drinking “blood milk” with the desert nomads, meeting with tribal chiefs in their villages, experiencing ways of life that were vastly different from anything she’d ever known.

In situations like that, Stennett said, you need to pay attention. The local values and norms are so unfamiliar, it’s easy to offend people unintentionally.

“You’re the stranger in the room,” she said. “You want to be helpful, but you need to be incredibly respectful.”

That was not her mindset, though, on that road to Lake Victoria. She was heading for a village she’d never seen, working with someone she didn’t know very well. She was cold and tired and hungry — and after the bus broke down, she still had a full day of walking to reach her destination.

While on the trail, she saw a group of people approaching. They were carrying someone in a stretcher.

“He had horrible, gaping wounds to his head and eye,” Stennett said. “It looked like he’d been attacked by lions.”

Leaping into action, she pulled out her first-aid kit and tried to remember how to fix a broken skull. But while she was putting a compress on the guy’s head, people started plucking at her, pulling her away.

“I was like, ‘What? This guy needs help,’ ” she said. “But they said no, they’d done that to him. I was shocked, but that was tribal law in an area that didn’t have local police.”

Stennett asked where they were taking the guy. They said they were carrying him to the village infirmary. That’s when she really lost it. She started lecturing them on how backward that was, to nearly beat someone to death and then take him to a doctor.

“How is that OK?” Stennett said. “I was so angry. But then someone told me, ‘You (Americans) have people walking into McDonald’s shooting complete strangers, and you’re telling us we need to do better?’ That totally put me in my place.”

Such experiences taught Stennett to get all sides of a story. She also, to this day, remains very watchful and sensitive to the people around her. Just because her intentions are good, she doesn’t assume they need or want her help.

If she could wave a wand and grant one wish, it would be for all Idahoans to have similar experiences of being the stranger in the room.

“You realize that not everyone lives the way you do or thinks like you do, but they still have some of the same needs and wants,” Stennett said. “I think that knowledge would make us a much more tolerant society.”

An example for life

When David Nelson was assigned to the Senate Transportation Committee in the fall of 2018, it gave him a chance to build on a family tradition.

For the better part of 60 years, Nelson’s father and/or grandfather had served as volunteer commissioners in the South Latah Highway District. The tradition began in the 1930s and carried on until 2005.

“My brother and I both failed when we didn’t inherit that responsibility,” said Nelson, a first-term senator from Moscow. “It motivated me to do transportation things once I got here (to the Statehouse). And it gave me a step up; some of the other legislators here served as highway commissioners and knew my dad.”

One of those was Rep. Clark Kauffman, R-Filer. He remembered the elder Nelson as being a pleasant, upstanding gentleman. One thing he couldn’t recall, though, was his political affiliation.

“I don’t remember if he was a Republican or a Democrat,” Kauffman said.

Besides his highway commission work, Nelson’s dad also served as a Latah County commissioner in the late ’70s and early ’80s.

Nelson, who grew up on the family farm near Genesee, said the way his father interacted with others has been an example in his own life.

“I just remember the way he worked with people,” Nelson said. “He was quiet, not emotional. He’d get people into a room and talk about things. That was always my example — I want to be available to people. And it has worked for me; down here I get along pretty well with Republicans.”

Lost in the wilderness

When she announced this week that she won’t be running for reelection, Boise Sen. Cherie Buckner-Webb paid tribute to her mother.

“My mother’s credo was ‘Disturb the peace,’ ” she said in a news release. “I plan to carry on that legacy, as a private citizen, to advocate for the issues that matter to me and other Idahoans.”

Inside the Statehouse, Buckner-Webb has been a friendly and persistent advocate for 10 years now, including one term in the House and four in the Senate. She currently serves as the Senate assistant Democratic leader.

She’s also part of the 0.7 percent of Idaho’s population that is black.

“I grew up in a family that was 100 percent black, but everywhere else I was the only black person in the room, or one of the only,” Buckner-Webb said. “That informed my approach to the world. You can’t walk in the world like everyone else.”

When she was 5 years old, someone burned a cross in front lawn of her family’s Boise home. After her dad doused the flames, her mom insisted he put it on the front porch.

“We’d already lived there a year,” Buckner-Webb recalled. “My mom said, ‘Those silly SOBs. They too late. We ain’t moving.’ She was a fearless woman. She made me do things I knew I couldn’t do.”

Buckner-Webb tells these stories without any hint of bitterness. In fact, what stands out about her most is her sense of humor regarding race relations.

In 2015, for example, she had an opportunity to meet President Barack Obama during a campaign stop in Boise.

“I told him, ‘I bet you didn’t know there were any black people in Idaho,’ ” she said. “ ‘Are you kidding,’ he said. ‘I doubled the population when I stepped off the plane.’ I love that man.”

Buckner-Webb’s family has roots in Arkansas and the Deep South on her mother’s side, but on her father’s side she is a fifth-generation Idahoan.

“I tell people we got lost in the desert,” she said.

She grew up in Boise, surrounded by multiple generations of relatives, all of whom had a hand in shaping her.

“They’d remind me of their journey through life,” she said. “They said how you carry yourself creates the expectations for how someone like you should be treated. ‘Who said it’s supposed to be easy?’ they’d ask. ‘Go do your work.’ ”

And now, that work includes disturbing the peace.

This is the latest in a series of stories this Idaho legislative session talking with elected officials about the formative experiences in their lives. The stories are based on the work of the National Institute of Civil Discourse, which maintains that it’s harder to demonize people when you know something about their journey in life.