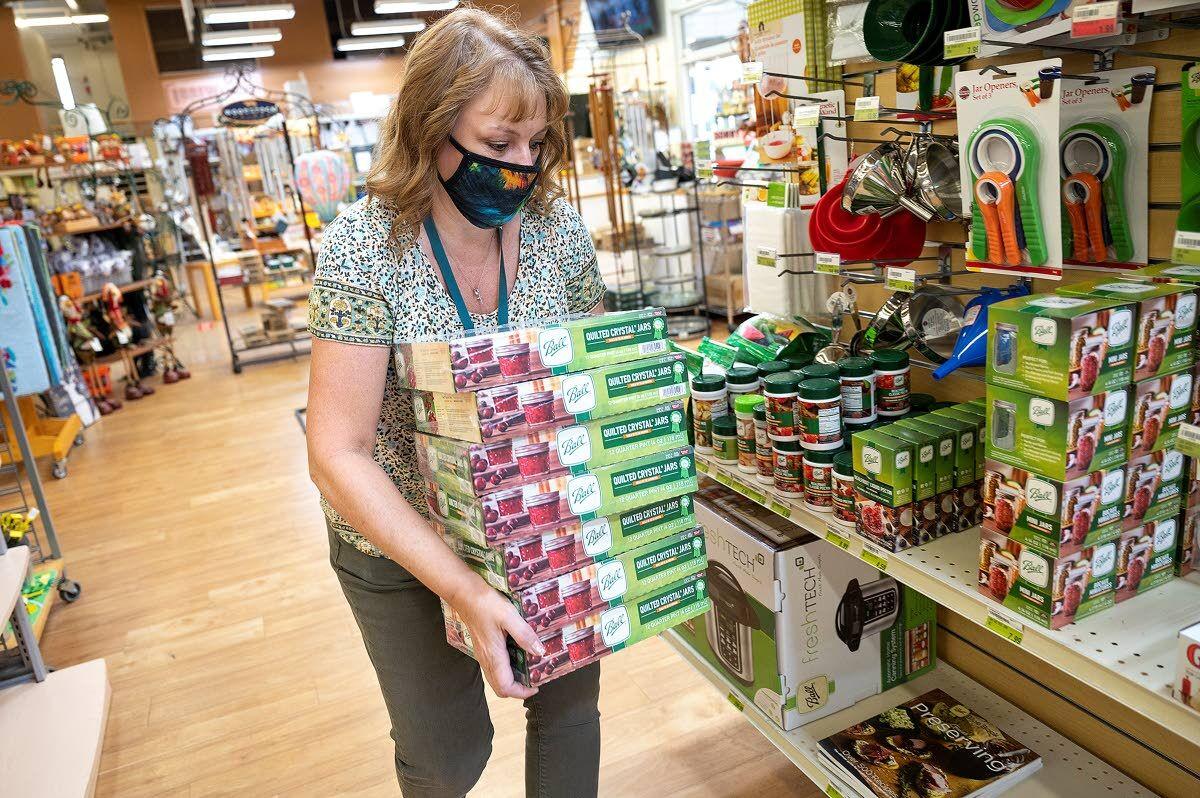 Jennifer Laferriere, store manager at Tri-State, carries a load of lids to the canning section at the store on Thursday afternoon in Moscow. Laferriere said that they have been trying to order the canning lids every week since June and Thursday was when they first received the order. She expects them to sellout in a matter of days. 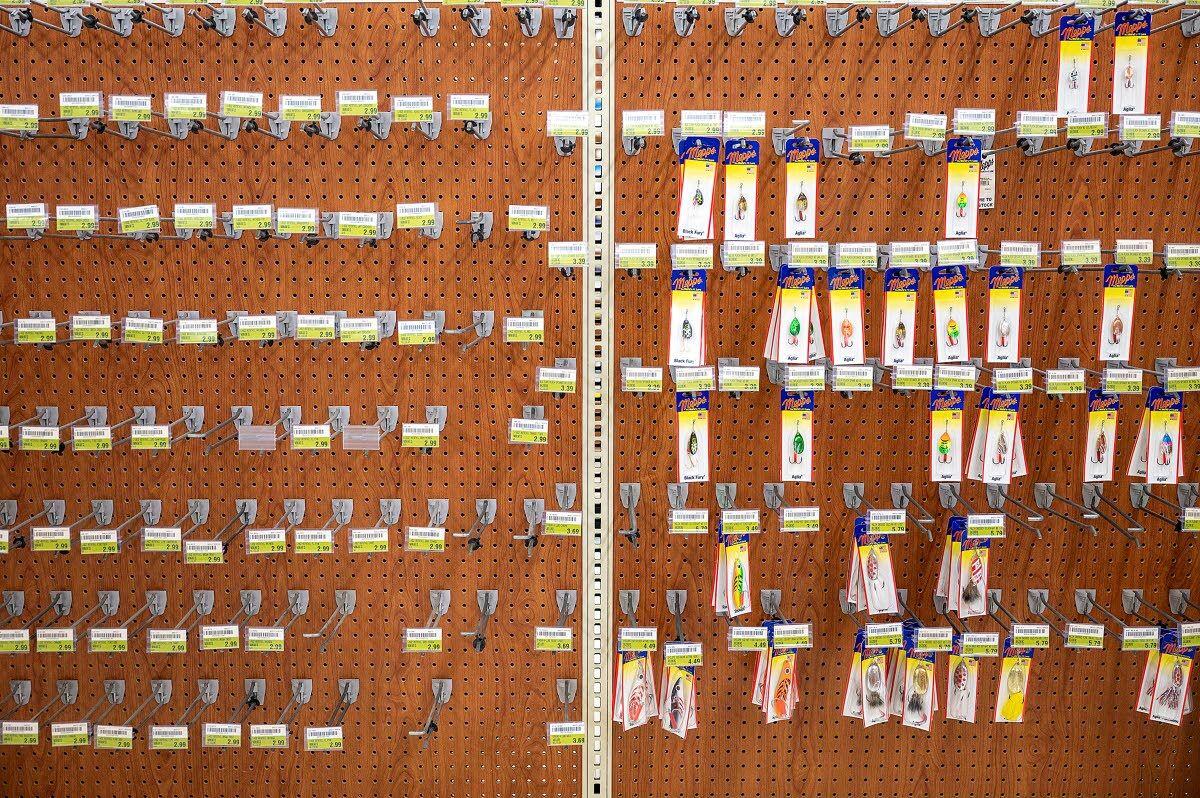 Rooster Tail lures are completely sold out at Tri-State Outfitters in Moscow. Jennifer Laferriere, the manager at Tri-State, said outdoor activities like fishing, camping and kayaking have seen a major uptick in popularity and their supply lines can’t keep up with the demand.

Jennifer Laferriere, store manager at Tri-State, carries a load of lids to the canning section at the store on Thursday afternoon in Moscow. Laferriere said that they have been trying to order the canning lids every week since June and Thursday was when they first received the order. She expects them to sellout in a matter of days.

Rooster Tail lures are completely sold out at Tri-State Outfitters in Moscow. Jennifer Laferriere, the manager at Tri-State, said outdoor activities like fishing, camping and kayaking have seen a major uptick in popularity and their supply lines can’t keep up with the demand.

LEWISTON — A temporary scarcity of items like toilet paper and hand sanitizer that hit in late March has subsided, but that was only the beginning of the coronavirus-induced shortages that have made day-to-day life more difficult during the pandemic.

Half a year after the first cases of the disease surfaced in the region, retailers are reporting difficulties in obtaining items that range from necessities such as cars to extras like pet birds. They are also experiencing challenges getting a host of other products like all-terrain vehicles, fishing tackle, camping gear, canning jars and certain pet supplies.

“We have concerns,” said Jennifer Laferriere, general manager of Tri-State Outfitters in Moscow. “We’re not sure how soon the manufacturing sector is going to be able to catch up.”

Big-box stores like Walmart and Costco are still watching their supply chains closely, according to conference calls for stock market analysts.

A number of factors caused the issues. Factories in many cases were shut down, even if they made staples.

In a variety of instances, that was layered with a spike in demand. People were spending their $1,200 checks from the Coronavirus Aid, Relief and Economic Security Act issued earlier in the pandemic.

Many car manufacturing plants were closed for a couple months in the spring, said Michael Wysup, owner of Wysup Chrysler Jeep Dodge in Pullman.

“It’s really hard to make that up,” Wysup said.

“If you keep your normal sales rate, but you don’t get replenished, it’s really difficult,” he said.

Demand is high for used cars, Hobson said, perhaps because of the stimulus checks and because in many instances people canceled vacations.

“We’ve had record-breaking months, and we’ve been in a pandemic,” she said. “Business has been good.”

But finding inventory is hard. Auctions that might have had 2,000 cars now have 1,000 to 700, nudging prices upward, with vehicles going for more than retail prices at wholesale auctions, she said.

At the same time, supply chain logistics are more complicated. The auctions went online for safety reasons, Wysup said, and that can create hassles in delivering the vehicles.

He used to attend auctions in the Northwest in person, taking as many as four drivers in his car to bring whatever he purchased back to Pullman.

Now, delivery times can be wildly unpredictable. A car he bought from California took 39 days to reach Pullman instead of the seven to 10 days that were normal before COVID-19.

It’s not just car dealers that are having to navigate supply and demand issues that are tremendously different from anything they’ve seen in their careers.

That number has since grown to 35 million, and Walmart is seeing similar trends with bicycling and golfing, Biggs said.

Few, if any, in retail forecast the pandemic, much less the dramatic climb in sales it would cause as families created new diversions for themselves while they were social distancing.

When COVID-19 arrived, stores were stocked for regular, not record-breaking seasons. Once they sold out, often they couldn’t get more since plants were closed because of the coronavirus.

As of last week, Tri-State Outfitters, for example, didn’t have rooster tails, a popular type of fishing lure, or folding camp chairs. The store has been short on canning supplies, largely because so many people filled their extra spare time with gardening.

Laferriere’s staff has fielded calls from cities as away as Seattle from would-be customers who wanted to order jars and lids.

“Customers just need to know we’re doing our best to source products,” she said. “We thank them for their patience.”

Chris Ulrich, a manager at Bob’s Pet and Pond in Lewiston, has encountered similar challenges. When the coronavirus began spreading, the business was allowed to be open because it carries pet food.

Sales for fish tanks spiked, along with supplies to build backyard ponds. At first they hesitated about selling merchandise that wasn’t essential, then decided it was helping ease uncertainty.“It was literally therapeutic, because they were stuck in the house,” Ulrich said.

To keep the store stocked, she became more flexible about purchasing from companies she normally doesn’t do business with. Even so, fish tanks, enclosures for lizards and pet birds are still hard to find.

Normally the store gets birds from California that are flown first to Salt Lake City and then to Lewiston. But when the number of Salt Lake City-to-Lewiston flights was reduced after commercial passenger traffic tanked, that channel evaporated over concerns the birds would linger too long in Salt Lake City. So Ulrich turned to breeders from Lewiston and Milton-Freewater, Ore.

While things are getting back to normal, she is discovering new ways the coronavirus is affecting the supply chain on an almost daily basis. Not too long ago, she got a shipment that began being transported on July 28 from Canada, without any explanation of the delay.

A manufacturer of canned dog food is opening a can factory in 2022, since so many cans have been diverted to businesses that sell food for people, she said.

What will happen during the holidays is still unfolding. In September, Biggs told stock market analysts at a Goldman Sachs event that his company is ready to adjust to whatever the environment is.

“(Families are) going to want to decorate their homes and try to make the holidays feel really special,” he said.

“There will be some supply constraints in different pockets of toys, but I don’t think that will be broad based,” Biggs said.

“The biggest difference for the Christmas holidays is getting back to basics, but you’re still going to see some hot exciting items,” Galanti said.

Tri-State Outfitters is optimistic about the holidays, partly because it has a robust inventory of shoes, home goods and clothing, Laferriere said.

“We really don’t know what to expect as far as Christmas sales,” she said. “I do believe that people are going to come out and shop.”

Wysup said he is confident about the future, but he believes the coronavirus will influence the economy for months to come. Its strength will depend on variables such as how soon a vaccine is developed and when schools get back to normal.

“I think the story is still being written,” he said.