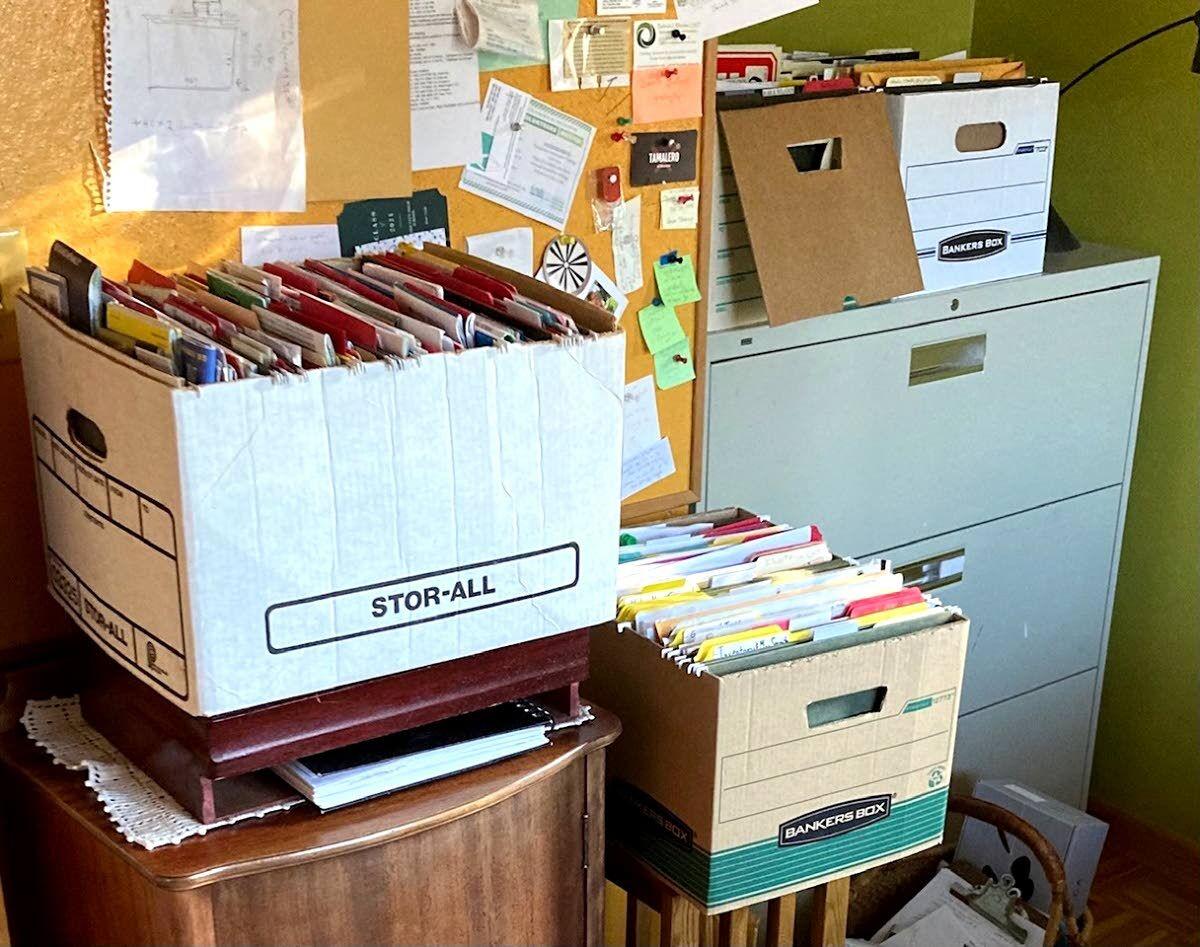 A bee in her bonnet, the author spent much of her weekend getting a handle on a "massive and exciting mess." With the help of a thermos or two of tea, she was able to get her files in order.

A bee in her bonnet, the author spent much of her weekend getting a handle on a "massive and exciting mess." With the help of a thermos or two of tea, she was able to get her files in order.

For this column I was planning to write about my first foray into professional organizing. And I do promise some good stories about the new job, along with some pretty impressive “before and after” pictures, so stay tuned for that.

But if you’ve been following my reporting, you know by now that I’m no bossy authority on tidying up. Rather, I’ve been reporting from the trenches, in drawer-by-drawer and closet-by-shelf fashion, sometimes in excruciating detail for you, about my progress toward downsizing without moving or dying.

I have learned a thing or two, and I’ve even conquered, or at least stabilized some areas of our home and premises, so I guess I have some expertise to offer. And I still get excited seeing some really overwhelming mess and imagining how I’d tackle it. In fact I’ve been known to let a mess at home grow more and more impressive, just to witness the difference when I finally tackle it … if I finally tackle it … or if my husband finally notices and tackles it … which has actually happened.

Our stovetop is a great illustration. Isn’t a heavily splattered, obviously well-used stove the sign of a good cook? Why would I want to spend time every day carefully wiping it down when I can let the crumbs and grime pile up over 2-3 weeks and then go at it: remove the burner plates and knobs, take the hand vacuum to the loose findings, soak the crusty stuff, and finally wipe that sucker down, transforming it back into the shiny black top I know and love?

Perhaps you’re not the type to see the potential satisfaction in a dirty stovetop. Or maybe you even have one of those smooth glass tops that only need a wipe-off after the scary red light has disappeared. No worries; we’re all different.

For the record, I’m fastidious about the countertops.

But my file drawers are another story entirely. So let me go back to where I started. On the most recent morning at my client‘s business, we were moving some office furniture. Empty file cabinets were slated to go away, and something about moving them out of a corner and taking measurements for something else put a bee in my bonnet.

I got home and suddenly realized how much sense it would make to switch out the wide lateral file cabinet in my studio with the tall narrower set in the home office. The lateral files would fit perfectly into an otherwise awkward nook in the office, and the tall ones would work much better in the studio.

Once I realized this, I didn’t have much trouble removing the stuffed drawers from the office cabinet and carting them all over to the studio. The problem was I couldn’t get the drawers out of the lateral files. And even after I transferred all their contents into several bankers’ boxes, the frame and empty drawers were still way too heavy for me to move. Fortunately a feisty girlfriend happened by. We borrowed my brother’s heavy-duty handcart and strapped the monstrosity on. Then, snapping and barking at each other only a little bit, we managed to haul it over the grass, up the steps and in the front door. The super part about her helping me was that unlike someone else I know, she didn’t ask, while rolling her eyes, why in heck I was switching cabinets in the first place when their capacity was the same.

Now that the contents of all the files were strewn about both office and studio, the time had finally arrived. After promising this purge for years, here was my golden opportunity. Another massive and exciting mess, all the more imperative to overcome since I had to switch out all the letter-sized hanging files with legal-sized ones anyway.

So last Saturday I set myself up with a comfortable stool and a thermos of tea, and started in with the fattest files of the most-likely-to-toss information. My original categories still mostly made sense. But, for example, my travel file got condensed to a fraction of its former spread. I alphabetized a handy collection of maps into another box, because I still like spreading them out, either to use, or dream with. But many were duplicates, or out-of-date. And since most planning information can be found online now, I’ve saved only unique, specific or intriguing reminders.

Like a lot of procrastinated projects, it was very enjoyable once I put the blinders on and got down to it. I spent most of the weekend at it, and emptied out half the office boxes.

I know I’ll finish, or at least get to a good stopping place, because I have three things going for me: The first is momentum. The second is I really want to get to my art files in the studio, since they’ve already given me some great ideas for a few other projects. And the third is I’m compulsive. So as soon as I send in this field report, I’m heading back to my office stool with another thermos of tea.

Leffingwell, who lives in Moscow, can be reached at jleffingwell4@gmail.com.