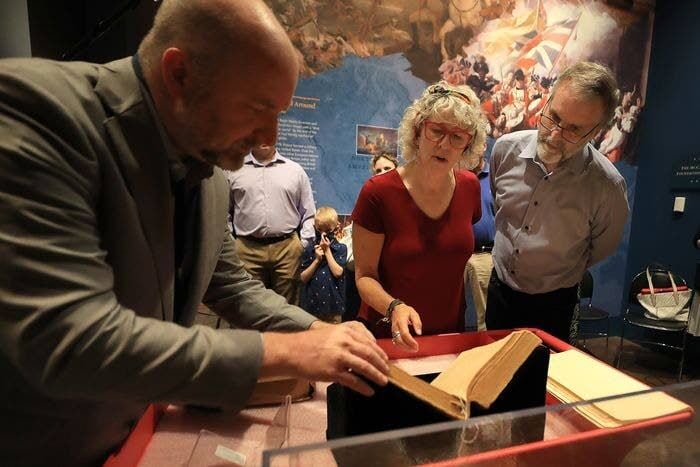 Photos by David Maialetti/TNSChief historian and curator Philip Mead, left, of the Museum of the American Revolution, looks over the Claypoole family Bible with Aileen and David Edge inside the museum. The Edges’ donated the Bible to the museum. 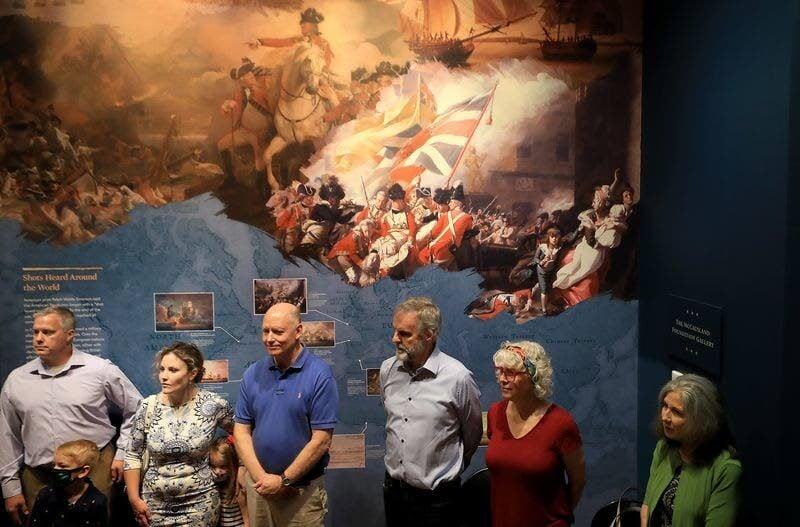 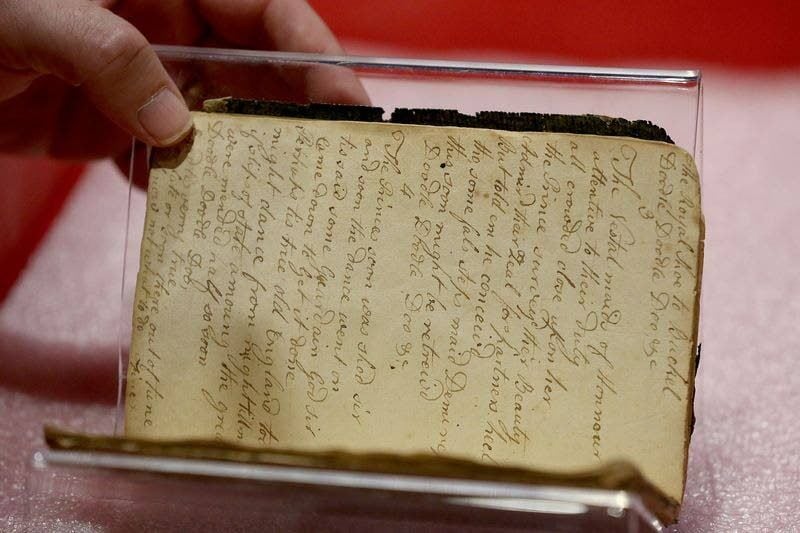 The diary of John Claypoole at the Museum of the American Revolution. 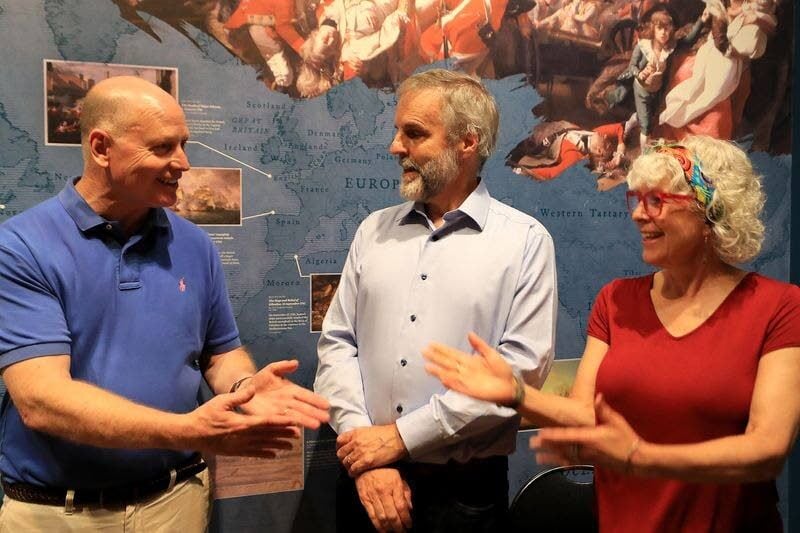 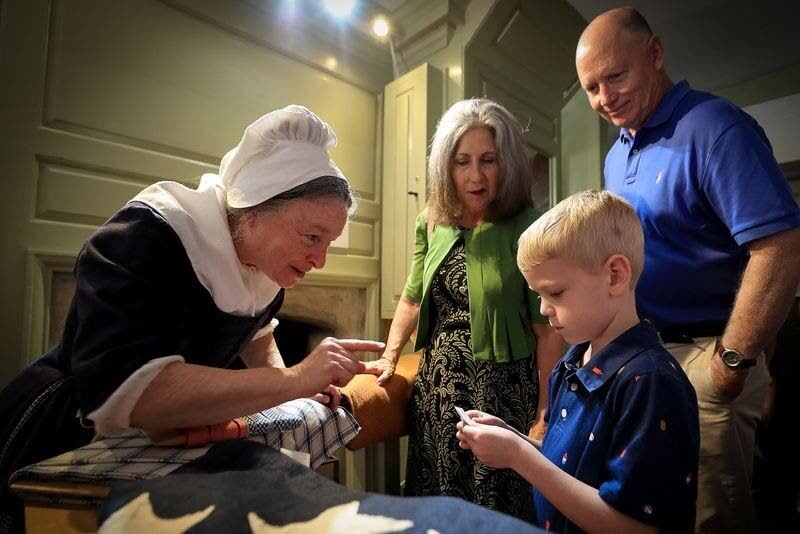 Photos by David Maialetti/TNSChief historian and curator Philip Mead, left, of the Museum of the American Revolution, looks over the Claypoole family Bible with Aileen and David Edge inside the museum. The Edges’ donated the Bible to the museum.

The diary of John Claypoole at the Museum of the American Revolution.

PHILADELPHIA — When her mom died last summer, Aileen Edge and her husband, Dave, made the long, sad drive down from Washington state to settle affairs.

Claire Canby Keleher lived outside of San Francisco and had been in declining health for some time, but her death was still unexpected, and Aileen was understandably upset. Her mom was a warm, welcoming woman, she said, with family and many friends who were prevented from proper mourning by the pandemic.

Beyond her grief, Aileen knew she had quite a task ahead. Her mom was a lover of the family legacy, which means, when you are a descendant of Betsy Ross and her third husband, John Claypoole, you have lots of stories, lots of letters and papers, and lots of gathered-in stuff going way, way back.

Yet nothing quite prepared the Edges for the richness of Ross-related artifacts and documents that had accumulated in the family over nearly 200 years, much of it finding a home with Claire Canby Keleher. It will now reside, in her mom’s memory, at the Museum of the American Revolution, at Third and Chestnut Streets in Philadelphia.

Last month, the Edges packed their precious historical patrimony into the car and drove across the country, reaching Philadelphia on a recent Wednesday where they delivered a small, battered paper diary, kept by John Claypoole during the 1780s, to the museum.

Claypoole met Betsy Ross’ second husband, Joseph Ashburn, when both were prisoners of war held in Britain’s Old Mill Prison, in Plymouth on England’s southern coast, during the revolutionary hostilities. When Ashburn died in the prison, Claypoole was there, describing their ordeal in his diary. Upon his release at war’s end, Claypoole traveled to Philadelphia to inform the seamstress of her widowhood. They were subsequently married in 1783.

In addition to the diary, the Edges donated an ancient Claypoole family Bible, with notations begun by John Claypoole’s mother in the 1740s, and a variety of 18th-century historic documents related to Philadelphia’s Quaker world to which Betsy Ross intermittently belonged. (The Betsy Ross House holds the Ross family Bible.)

The Edges were not the only Ross-Claypoole descendants gathered at the museum that day. Stephen and Cecelia Balderston and their children and grandchildren were also there. The Balderstons, who live in Colora, Md., and with other extended family members had donated John Claypoole’s sea chest to the museum in 2019, had heard of the Edges, knew they were cousins, but had never met them.

Indeed, they met that day for the first time while gathered about the worn wooden sea chest, on display at the museum, near to where the Claypoole diary, technically called a “memorandum book,” will be exhibited for the first time beginning Friday. The book was no doubt packed in the chest when Claypoole sailed to Philadelphia with news of Ashburn’s death.

Philip Mead, the museum’s chief historian and curator, told the 25 or so people gathered at the museum that the day marked “the first time in who knows how long … certainly multiple generations, we’re able to reunite the book, the memorandum book manuscript that John Claypoole kept, while a prisoner of war, with his sea chest.”

“That is just one of the most thrilling things that can happen in a museum — really reconstructing these stories using the objects that we can display,” Mead said, speaking to the gathered Ross descendants. “And it’s actually probably unique, in my experience, to have it come from a family reunion. I feel like I’m witnessing family reunions of different generations of your family, seeing you all together, and then seeing this [18th-century] generation’s objects. Those people from the 18th century are gone. But their objects are here, and you’re here.”

That the objects survived at all is remarkable. Aileen Edge found the Claypoole diary, for instance, in a shoe box casually packed in a Bekins storage carton in her mother’s Marin County garage.

“When we saw the box, it was just kind of randomly sitting in the garage, and it was filled with mostly letters that my uncle had saved when he was a student,” Aileen said. “Then on the next layer was this little old shoe box that had written on it, ‘contents of Gardner family safe deposit box.’ So we took that box back to the hotel and looked at it. And when we opened the box, we saw this small, wrapped-up book, and it said it was the diary belonging to John Claypoole. And, of course, I was like, ‘John Claypoole? That’s Betsy Ross.’ And I thought, ‘This can’t actually be something belonging to John Claypoole!’”

The Claypoole Bible had a similar casual life with Aileen’s mom — she had it packed inside a blue chest stuck in the family room.

“We used to set drinks on it and this and that and everything else,” said Aileen.

“We saw the Bible and like, Oh, that’s an old crummy family Bible,” said Dave.

But then a few evenings later, Dave was reading a letter written by Betsy Ross’ grandson, William J. Canby, which described the old Claypoole Bible down to its lost pages and the copious family history notations.

“Dave was like, ‘Oh, my gosh, I think that’s that Bible!’” said Aileen. “It was just like the past speaking, you know, him speaking to us now. It was amazing.”

The Balderston family from Maryland is similarly surrounded by historic furniture and artifacts passed down from generation to generation.

Neither the Balderstons nor the Edges are much concerned with the vagaries of the Betsy Ross story. They know she was a skilled seamstress who stitched a thousand flags, although maybe not the very first one. Yes, her house is on Arch Street, although she may have not actually lived in the building now called the Betsy Ross House.

On the other hand, as Stephen Balderston said, “Who knows?” He happily took the whole family, grandkids and all, to visit the Betsy Ross House on Arch Street.

Mead, the museum historian, points out that surveys of college students consistently rank Betsy Ross as “one of the top 10 founders” of the nation. But, he says, regardless of the mythology, Ross was a rather remarkable woman. She outlived three husbands (the first, John Ross, died as the Revolution was beginning).

She was a trained upholsterer in a Philadelphia keen on luxury, and a businesswoman who made her own living for many years, only retiring when failing eyesight made it difficult to sew.

“One of the wonderful things about the study of the Revolution today is that scholars are recovering those stories and showing how they’re so much more interesting than the myths, and that’s why having the physical, real things from her life and that of John Claypoole is so important,” Mead said. “They cut through past and all of that mythmaking to the 18th century itself.”