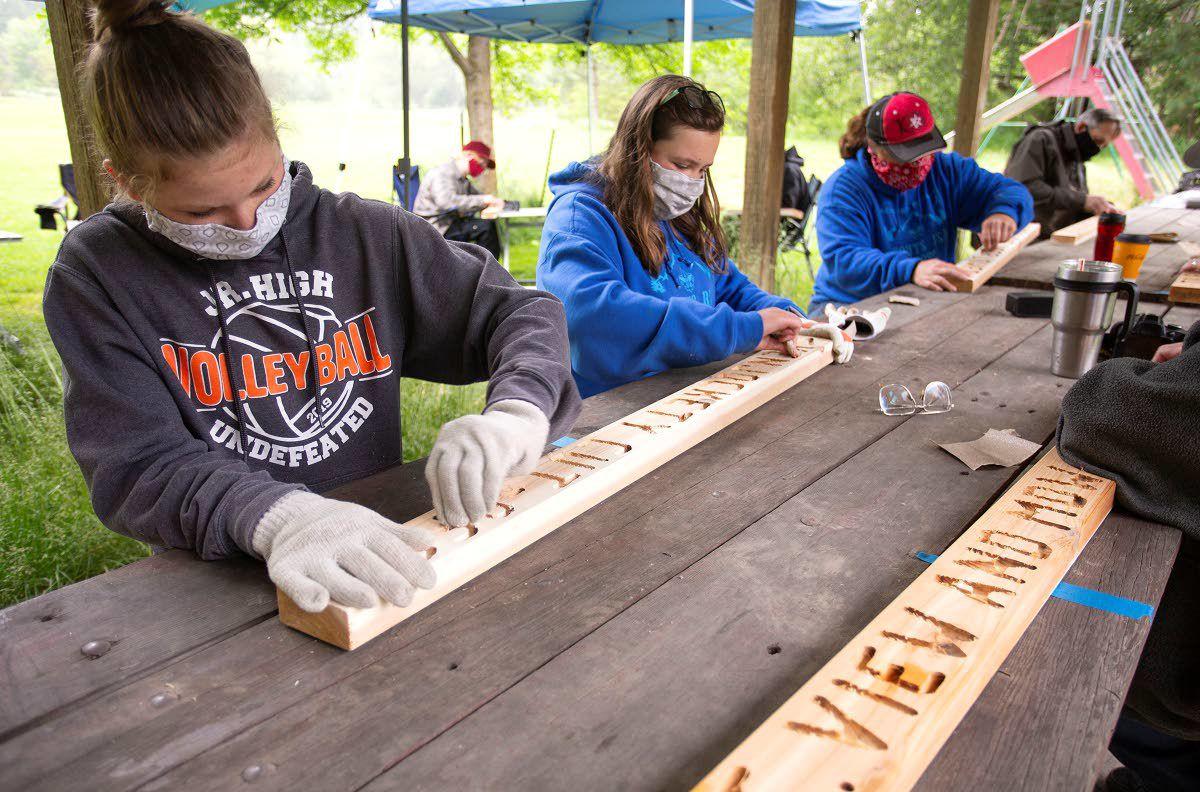 Photos by Geoff Crimmins/Daily NewsVolunteers Olivia Tyler and Eva Bosshardt sand signs before staining them on Saturday at Robinson Park, east of Moscow. Aila Carr-Chellman will install the signs at Idler’s Rest Nature Preserve for her Eagle Scout project. 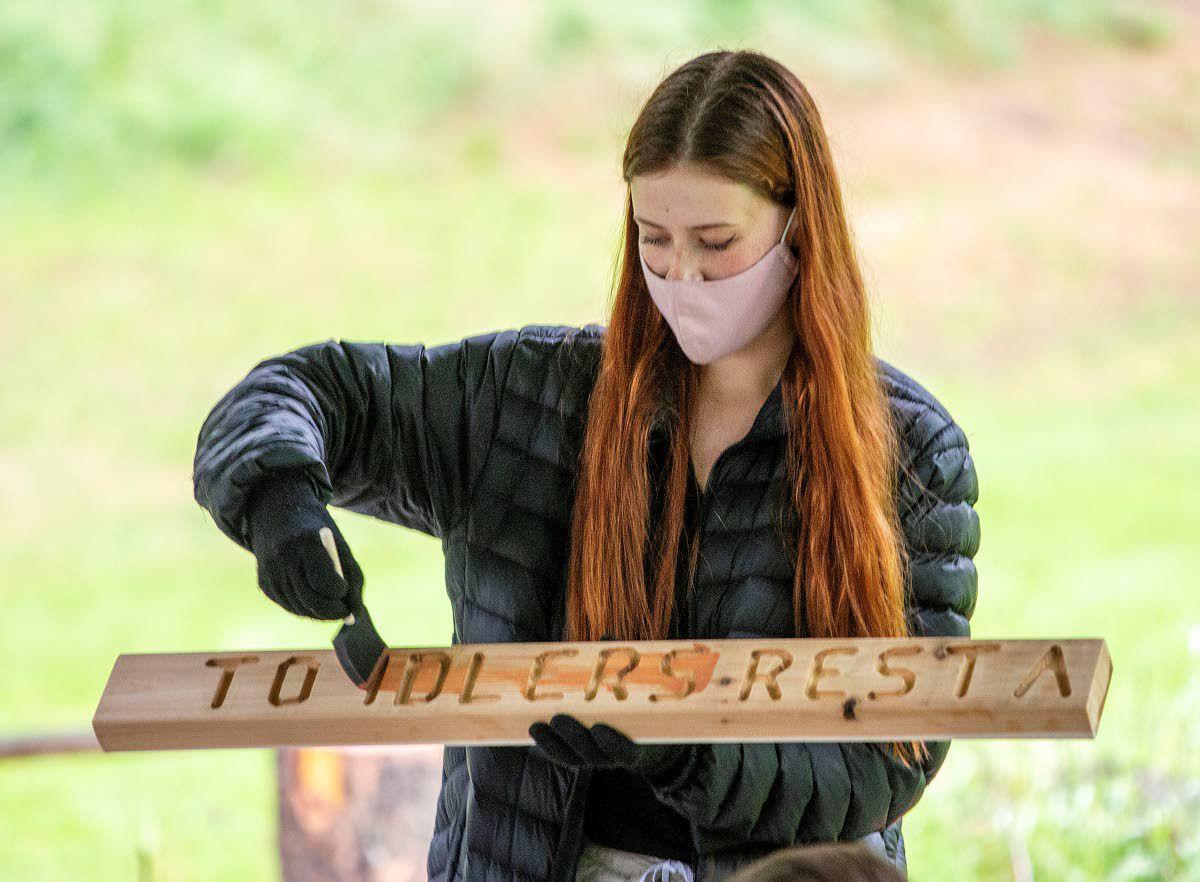 Aila Carr-Chellman demonstrates how to stain a wooden sign. 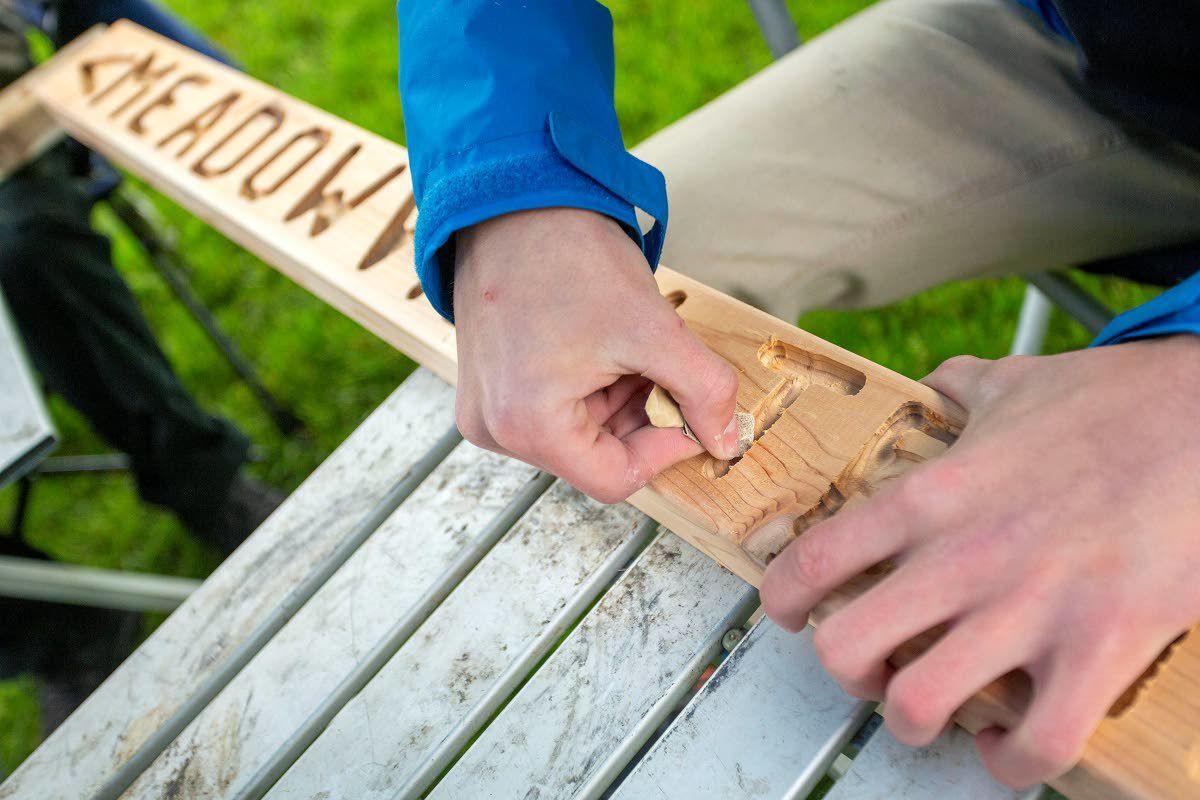 Photos by Geoff Crimmins/Daily NewsVolunteers Olivia Tyler and Eva Bosshardt sand signs before staining them on Saturday at Robinson Park, east of Moscow. Aila Carr-Chellman will install the signs at Idler’s Rest Nature Preserve for her Eagle Scout project.

Aila Carr-Chellman demonstrates how to stain a wooden sign.

But that need will be filled this summer at the nature preserve at the foot of Moscow Mountain, thanks to a Moscow girl’s Boy Scouts of America Eagle Scout Service Project.

Aila Carr-Chellman, 17, of Scouts BSA girls Troop 333, and about 15 fellow scouts from the Moscow boys and girls troops, as well as a few adults, sanded and stained 20 cedar signs June 13 at Robinson County Park northeast of Moscow.

“Idler’s Rest was a big part of my Moscow experience in addition to my scouting experience,” said Carr-Chellman, who recently finished her junior year at Moscow High School and is moving to Ohio with her family later this month. “I learned how to navigate and use a compass and orient a map at Idler’s Rest.”

Carr-Chellman, who also helped engrave the signs using a router, said she and other scouts worked for two hours under the park’s gazebo and two portable canopies on the cold and rainy Saturday.

“I’m really proud of all the help I’ve gotten from the community of scouts,” she said. “It’s really remarkable.”

The work party was the culmination of many months of work toward the Eagle Scout rank — the highest rank in Scouts BSA and one that Carr-Chellman expects to earn in October. She estimated she has invested more than 150 hours in the project overall.

“She is such a go-getter and such a wonderful young lady,” Jovanovich-Walker said.

Carr-Chellman said she will be the first person from Troop 333 to attain her Eagle Scout rank.

Thousands of girls across the country, including eight in Moscow, were officially welcomed into BSA in February 2019. The organization is now called Scouts BSA to welcome both genders, ages 11 to 17.

Moscow Troop 333 was one of the girls troops officially launched in February 2019 — 98 years after Moscow boys Troop 344 was formed. Both Moscow troops are chartered by First Presbyterian Church in Moscow.

Carr-Chellman said via text that her brothers and father were Eagle Scouts, so it means a lot to her to have the opportunity to join that elite club.

“I tagged along with a lot of their scouting adventures as a kid but of course I couldn’t be involved in any official way,” she said in a text message. “To be able to pioneer a troop of my own so I can join my brothers and father and also make that happen for girls in the future means everything to me.”

Jovanovich-Walker said Carr-Chellman approached Palouse Land Trust, which owns and maintains Idler’s Rest, requesting to do her Eagle Scout project at the nature preserve if possible. Jovanovich-Walker said they looked for a project on Idler’s Rest’s to-do list that would be meaningful for Carr-Chellman and for the community, and the signs project floated to the top.

“I just thought if there was some way I could give back to them and provide them with something in exchange for all the experiences they’ve given me, I would want to do that,” Carr-Chellman said. “This is I think the best way I can do that.”

She said good craftsmanship and staying true to nature at Idler’s Rest meant a great deal to her, which is why cedar, a popular tree at the nature preserve, was chosen for the signs.

Jovanovich-Walker said there are currently only a few signs to guide hikers at Idler’s Rest and many who are unfamiliar with the trails do not know where the trails are and how to navigate them.

“It’s so exciting to have actual directional and informational signs out there because it’s been lacking for quite a few years,” Jovanovich-Walker said.

She said AmeriCorps volunteers will post the signs by the end of July.

Scouts have been an integral part of Idler’s Rest since before it formed as a nature preserve in 1968, Jovanovich-Walker said.

“It’s just so wonderful for us here so many years later to still get to work with the scouts and Aila is the first female going for Eagle Scout that we’ve ever had, so that’s just personally really exciting for us to have a young lady working towards Eagle Scout,” she said.