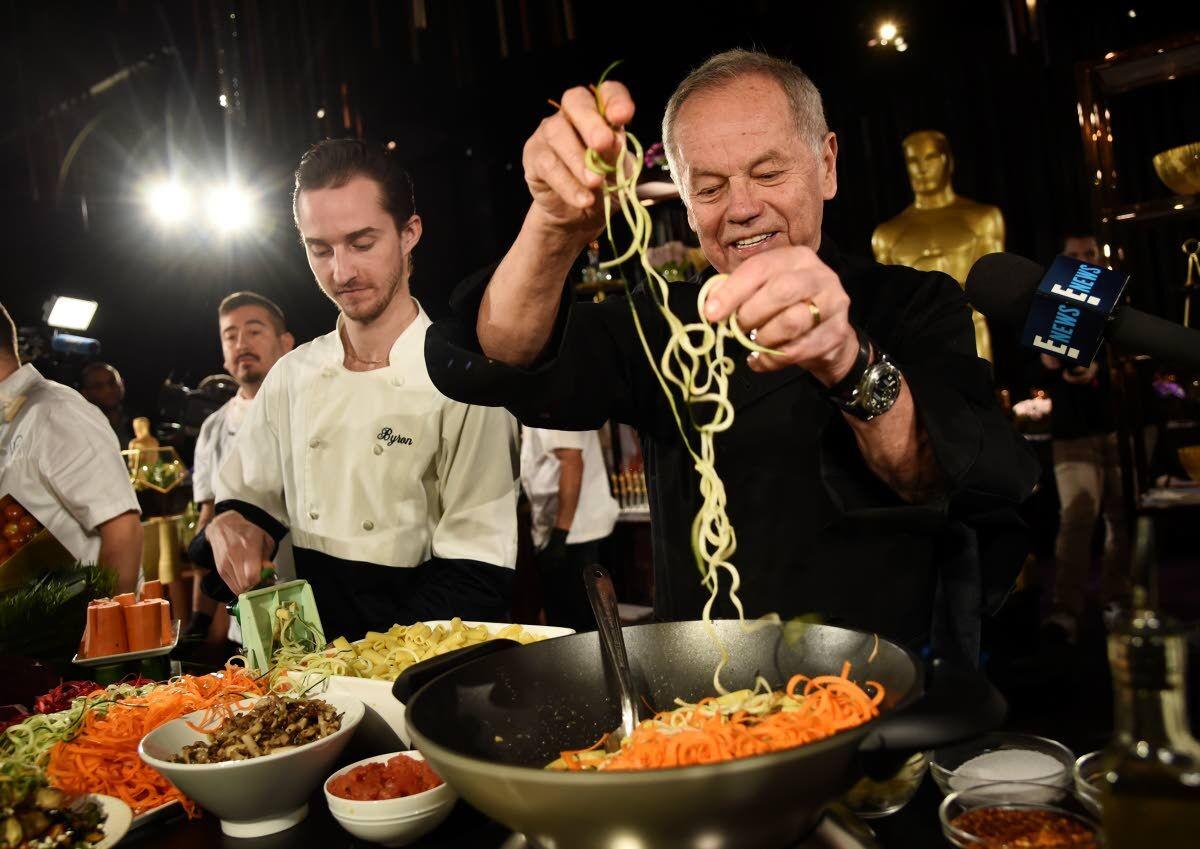 Associated Press fileChef Wolfgang Puck, right, and his son, Byron, make a pasta dish at the Governors Ball Press Preview for the 92nd Academy Awards in Los Angeles on Jan. 31, 2020. A new four-part documentary series, “The Event,” shows the intense planning and details that go into high-profile catering. The series premiereed on HBO Max on Thursday. 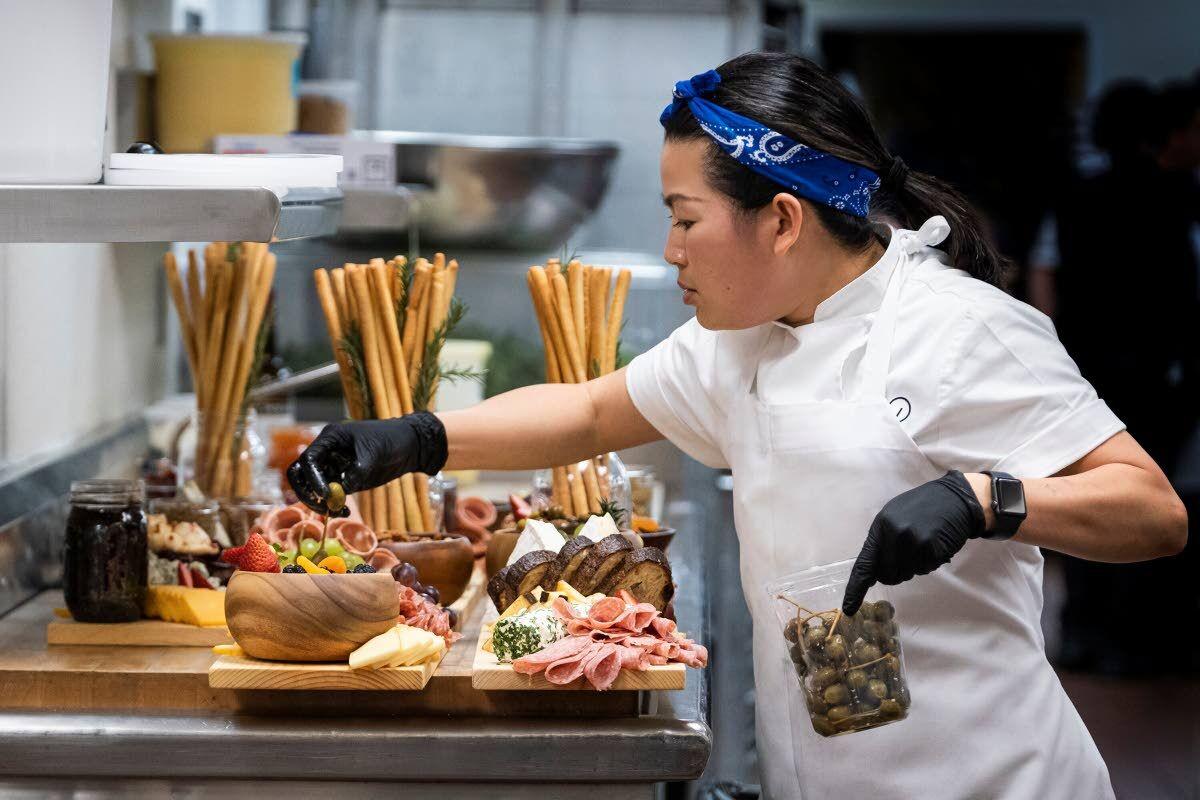 This image released by HBO Max shows Chef Pauline in a scene from the four-part documentary series, “The Event,” which shows the intense planning and details that go into high-profile catering. The series premieres on HBO Max on Jan. 14. (Jessica Brooks/HBO Max via AP)

Associated Press fileChef Wolfgang Puck, right, and his son, Byron, make a pasta dish at the Governors Ball Press Preview for the 92nd Academy Awards in Los Angeles on Jan. 31, 2020. A new four-part documentary series, “The Event,” shows the intense planning and details that go into high-profile catering. The series premiereed on HBO Max on Thursday.

This image released by HBO Max shows Chef Pauline in a scene from the four-part documentary series, “The Event,” which shows the intense planning and details that go into high-profile catering. The series premieres on HBO Max on Jan. 14. (Jessica Brooks/HBO Max via AP)

NEW YORK — Cooking a meal for a big group is always stressful. So just imagine cooking for more than 1,000 guests. Now make those guests white-hot celebrities like Brad Pitt.

Usually cameras are trained on the celebrities at such shindigs but with the new HBO Max series “The Event,” they have captured the cooks and servers toiling behind the scenes. It started airing Thursday.

“I do think we tend to take catered food completely for granted,” says John Watkin, who with frequent collaborator Eamon Harrington co-directed the documentary series and served as executive producers.

From the Screen Actors Guild Awards to HBO’s premier party for “Westworld,” the four-part series shows the intense planning and details that go into high-profile catering.

With complex dishes and makeshift kitchens, something is bound to go wrong, and that’s one of the lessons home cooks can learn from the series — flexibility. As one chef notes: “To me, catering is all about adjusting.”

That was evident last January at the SAG awards in Los Angeles. Puck’s team had created a dish for 1,280 that included pan-roasted chicken with turnip ginger puree and gooseberry salsa verde alongside miso-glazed salmon with sticky rice and sesame cucumbers.

Then the chefs got a stunning bombshell from organizers just days before the vent: The award show had decided to go vegan.

Puck’s caterers quickly canceled incoming orders of 250 pounds of salmon and 300 pounds of chicken, pivoting to making a paella rice dish with kale and squash, charred baby carrots with a harissa glaze and a bean salad with arugula, olives and baby peppers.

Cameras captured the painstaking building of the dish on plates that stretch for yards, element by element, often with a tiny leaf added at the end with tweezers.

“It sort of moves along like an assembly line. But the quality of the product is so high it’s like doing assembly lines of the most expensive Mercedes you can buy,” says Harrington.

Viewers also watch the butlers’ meetings, when waiters are told to take advantage of the 2-minute commercial window by swarming to clean tables and take drink orders. “Watch your thumbs! No thumbs on the plate!” they are warned.

As much as the servers were challenged, so were the filmmakers. “It was so frenetic,” says Watkin. “There’s so much happening so fast and trying to find ways of capturing all that and making sure we got cameras in the right place and making sure we’re making the shots that we want to make — it was really challenging.”

In the second episode, 1,200 business venture capitalists and business bigwigs gather for the Upfront Summit at the Rose Bowl for a two-day event that requires catering for breakfast, lunch, snacks and dinner.

The Puck crew had to deal with a few curveballs, including high winds, not enough servers and the so-called “quiche incident” — in the rush to get the quiches plated, there wasn’t enough time to let them rest so many ended up being messy. “It’s not about the fumble. It’s how you recover,” the film quotes Barbara Brass, vice president of catering sales.

Watkin and Harrington began the project last January, only a few days before the SAG awards — “It was a baptism by fire,” says Harrington — and grew to having three or four camera crews per event. The Rose Bowl event was the most physically taxing: “We got our 10,000 steps times three or four probably every day on that show,” he added.

Every event was likely to attract Puck himself, who is just as much as a celebrity as the guests. The chef often got busy — tasting, advising and even manning a cooking station. “You don’t know if he’s coming for 15 minutes or if he’s coming for two hours. But while he’s there, he becomes the center of attention,” says Harrington. Puck didn’t interfere with the series, and his only request was that his food “look good.”

In a separate interview, Puck admitted his personality isn’t always a perfect fit for the world of catering. “I’m a guy who does everything at the last moment. I often create chaos because I change my mind in the last moment,” he says. “I also know in catering, it is really important to be organized so having a good team is very important,”

The film crews showed up on big days with the cooks — sometimes as early as 5:30 a.m. — but there were some benefits. Watkin and Harrington felt obliged to try all the food. After all, they had to know what they were describing. Watkin recalls taking a few bites of the messy quiche — and losing his mind.

“I’ve never taken heroin, but I think that the experience of eating Wolfgang’s quiche must be very similar to what it’s like when you get a shot of heroin in the arm,” he says, laughing. “I immediately had this total feeling of ecstasy and then I immediately had to chase the high. I had to have another piece of quiche.”

Mark Kennedy is at http://twitter.com/KennedyTwits