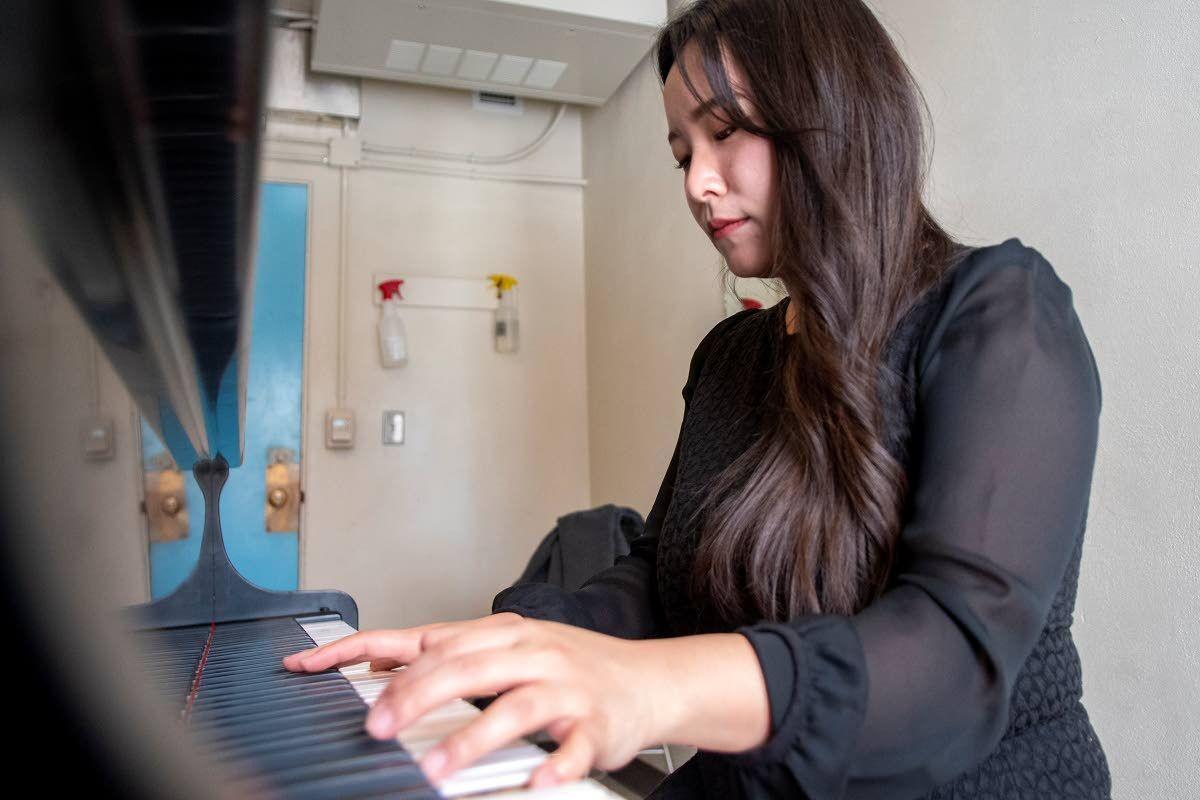 Zach Wilkinson/Daily NewsABOVE AND BELOW: Second-year masters student in the piano performance program at the University of Idaho, Eunbee Kim, practices in a studio Tuesday morning on the third floor of Ridenbaugh Hall. 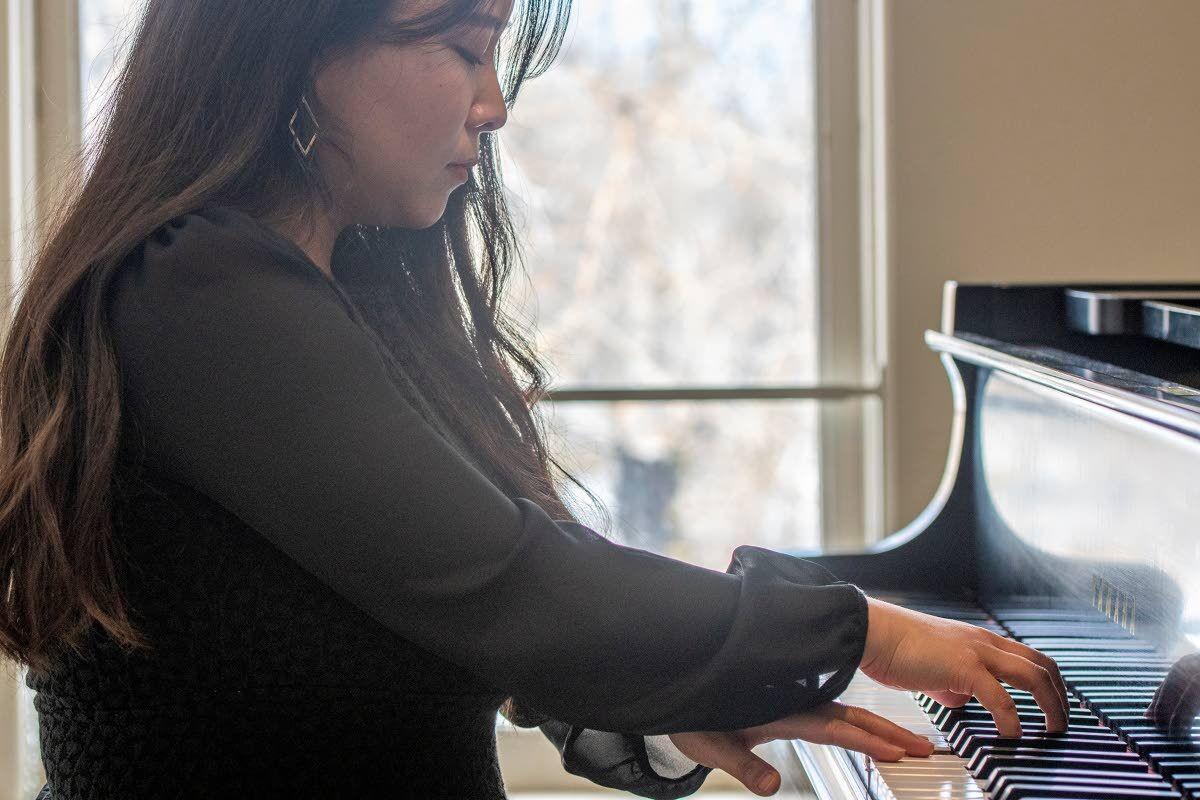 Second-year masters student in the piano performance program at the University of Idaho, Eunbee Kim, practices in a studio on the third floor of Ridenbaugh Hall, on Tuesday morning.

Zach Wilkinson/Daily NewsABOVE AND BELOW: Second-year masters student in the piano performance program at the University of Idaho, Eunbee Kim, practices in a studio Tuesday morning on the third floor of Ridenbaugh Hall.

Second-year masters student in the piano performance program at the University of Idaho, Eunbee Kim, practices in a studio on the third floor of Ridenbaugh Hall, on Tuesday morning.

A young woman walks on stage, her straight, black hair neatly tied back. She takes a bow before sitting at the Steinway grand piano. After a moment, she leaps into a Franz Joseph Haydn sonata.

Eunbee Kim’s hands flutter over the keys with a gentle, confident grace. She’s studied piano for 24 years, but this is her first solo recital. As a second-year graduate student at the University of Idaho, this was the first of two recitals she will perform before she earns a master’s degree in piano performance. She’s already working on her next step — preparing to audition for a Doctor of Musical Arts (DMA) program, an industry-standard degree for music performers.

American undergraduate students typically perform a full recital in their senior year, associate professor Roger McVey said. Kim graduated from Dong-eui University in Busan, South Korea. Her Oct. 4 performance was not only her first recital at UI, but the first solo recital she’s performed at all.

Kim organized the program for her recital with McVey, her primary piano instructor and advisor. They settled on the Hayden piece, a large work by Claude Debussy, a Franz Liszt etude and Kim’s dream piece — Fryderyk Chopin’s “Ballade No. 1 in G Minor, Op. 23.” This collection allowed Kim to display her ability in a variety of genres and playing styles.

Originally, Kim would have performed this program last spring. However, when COVID-19 hit, her recital was postponed. She was injured shortly after and had to stop practicing for several months. She restarted preparations in June.

A week or two before the recital, McVey and Kim met in the wood-paneled walls of Lionel Hampton School of Music’s Haddock Performance Hall three to four times for a few full run-throughs. Kim performed the program straight through for the first hour and worked on details with the help of McVey for the second. While Kim also practiced independently, these two-hour sessions were the only times she had access to the instrument she would perform with.

“I memorized all the pieces so I could focus on making music like sound and detail,” Kim said. “I slept less and practiced more … so I felt the change from day to day.”

Kim was most concerned about the Debussy work, her first piece after intermission. She felt she played too fast, forgetting to breathe in the first half of the recital. But once she relaxed after intermission, she performed better than ever before. McVey and associate professor Barry Bilderback, a member of Kim’s graduate committee, extended this sentiment to her entire performance.

“She managed to keep her focus all the way through and play with control and expression,” McVey said. “It was a very mature, professional-level concert. It was the best I’ve ever heard her play. She peaked at just the right time.”

To graduate, Kim will need to perform a chamber music recital this spring and a lecture recital near the end of her studies. Lecture recitals are like a thesis for music-performance majors, McVey said. She will give a lecture open to the public, after which her graduate committee will privately ask questions that could cover her entire academic experience at UI.

“We strategically make it as challenging as possible while also doing our best to set the student up for success,” Bilderback said. “It’s not comfortable, it’s not fun.”

The DMA application process began to ramp up in December, as Kim finished her second to last semester as a master’s student. Kim hopes completing a DMA will help her become a more professional pianist so her performances can help people feel better when times get tough.

Allowing the momentum of the last note to carry her off the bench, Kim rocks to her feet and bows one last time. The puffy white sleeves of her dress fall at her sides, still for the first time since she’d sat down to play. She takes a deep breath, turns to her right and exits, having finished another step in her journey to performing on an even larger stage.

Alexis is a majoring in Journalism at the University of Idaho. She has worked for UI’s Argonaut and Blot student publications as well as KUOI radio. Alexis wrote this story in a UI feature writing class for instructor Don Shelton, a former executive editor with The Seattle Times. It is being published as part of partnership with the UI Journalism and Mass Media Department.