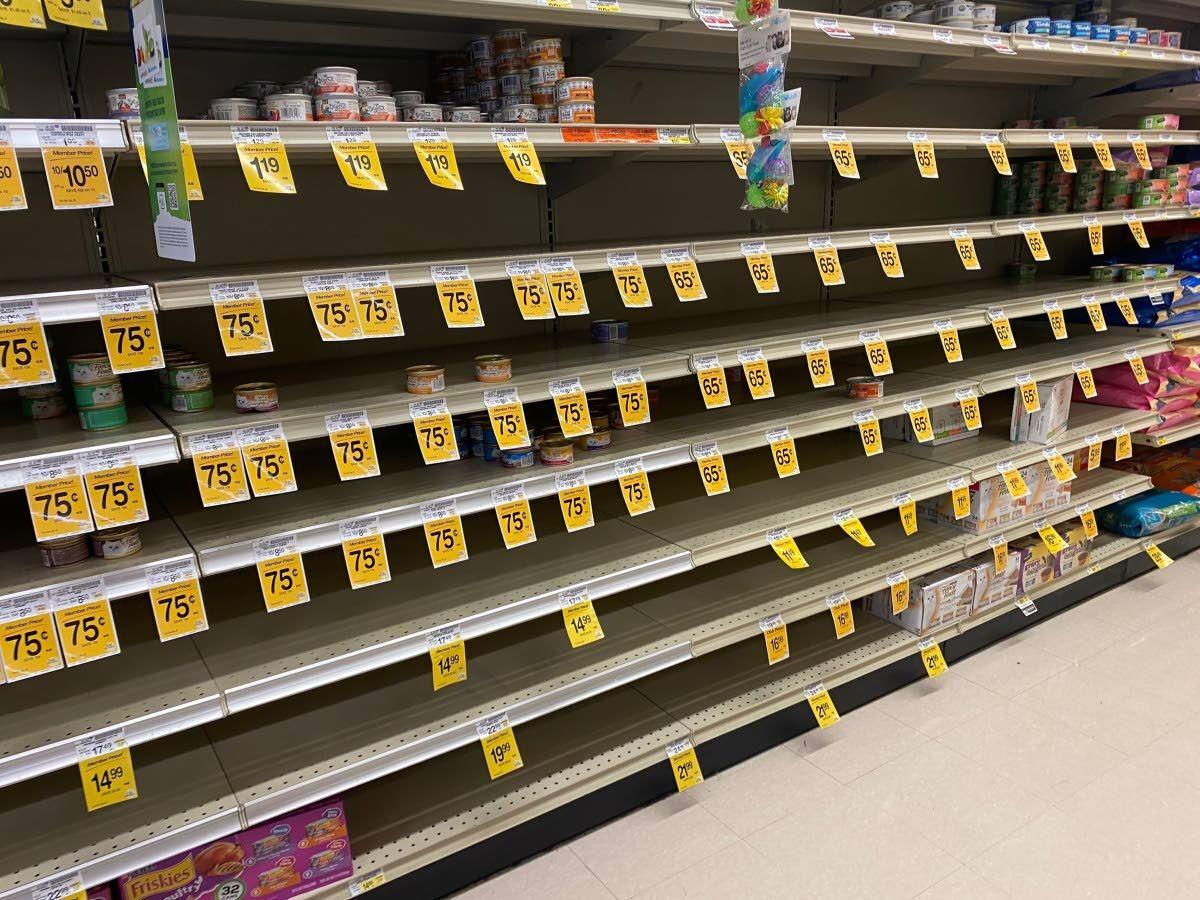 Will Binns of Port Angeles, Wash., after reading last week’s Tooth & Nail column, contributed this image of empty pet food shelves at a Safeway store in his city.

In Robert Altman’s film, “The Long Goodbye,” Elliot Gould plays detective Phillip Marlowe. He is awakened in the wee hours by his hungry cat. He discovers he has none of the kitty’s favorite cat food left.

He leaves to search for the fictitious Courry brand cat food. There’s none in the local store. At home again, he tries to trick the cat by putting another brand in the Courry brand can and then scooping it out. The cat of course wins the nonverbal stare down saying, “What do you think I am, stupid?”

No sooner than this column hit the doorstep last Saturday (the column in which I discussed pet food shortages) three people contacted me with their version of the shortage. I offer my sincerest thanks.

The first person did not want to be identified. Her edited writing follows.

“Three years ago I adopted Axel from the Moscow Humane Society. He had been rescued as a 2-week-old kitten from an abandoned shed. He was weaned to Fancy Feast Ocean White Fish and Tuna pate. When I adopted him at 10 weeks old, I was told that Axel was used to that particular brand of food.

“Occasionally, I would try to introduce him to other types of cat food. No go. One time he went for three days without eating the high-end food I offered. OK, I caved and bought him his favorite food.

“In the last several months, I’ve had difficulty finding the only cat food Axel will eat. This causes some stress for me! In fact, last week I was down to one can of cat food and spent most of one morning driving to Safeway, Rosauers and Walmart searching for his dinner. Nothing — shelves were bare of any kind of cat food. I finally scored 24 cans at Winco. My relief was palpable!”

The second response came from Meg Kelley. She wrote, “My dog likes Merrick canned food with his kibble every meal and Pets are People Too has been running low for a few months and now appears to be totally out.”

She went on to say she really likes the store and means no criticism toward the merchant. Instead, she expressed concern they may be having difficulty getting the product in.

The final response came from Will Binns with the photo above taken Oct. 25, showing the empty shelves at his Safeway store in Port Angeles, Wash. He took the photos two days before the column ran. My first response was, Wow!

On Monday, in Rosauers in Moscow, I walked the pet food aisle. There were indeed some empty shelves for certain foods. Most of those were canned foods, not dry kibble.

Overall, I think it is easy to say, I stand corrected. There are spot shortages of pet food at least here regionally.

“The availability of transportation and drivers, as well as weather incidents, can impact the movement of ingredients and finished products across the country. This can be further compounded by regulatory and trade developments that ripple up the supply chain, such as government incentives for renewable diesel that impact the pet food ingredient marketplace and cargo ship delays at America’s ports.”

OK, blame the weather. Blame those damned regulations and trade issues. Oh yeah, take a whack at renewable diesel, too. And don’t forget those cargo ships at anchor. I think you can translate this well.

Powell is the public information officer for the Washington State University College of Veterinary Medicine, which provides this column as a community service. For questions or concerns about animals you’d like to read about, email cpowell@vetmed.wsu.edu.