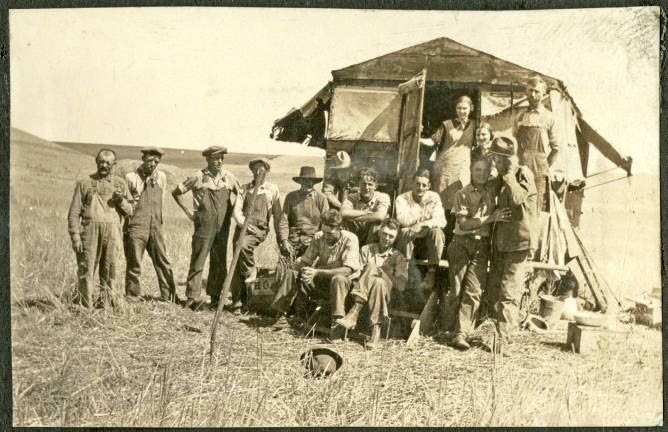 Whitman County heritageJoe Druffel’s threshing crew is seen hanging out at the cook shack in the wheat straw, circa 1925. Crews would receive three daily meals at the shack while their horses would be serviced by the teamsters. 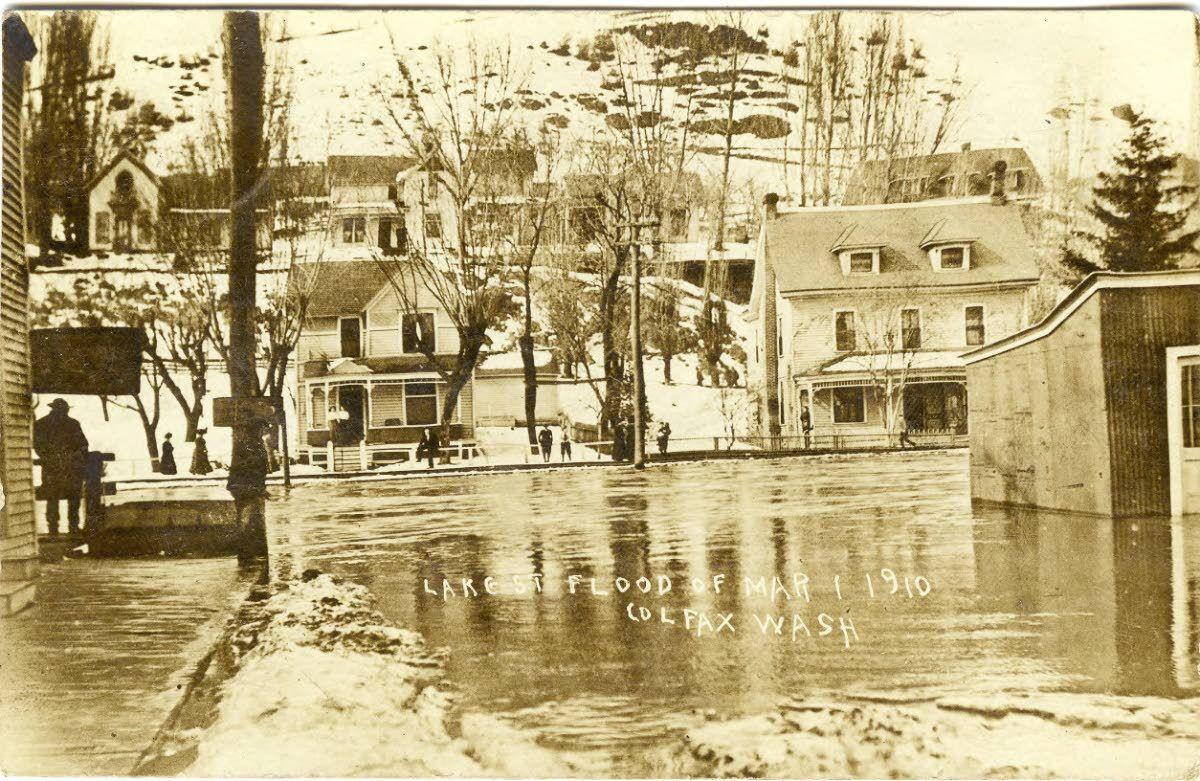 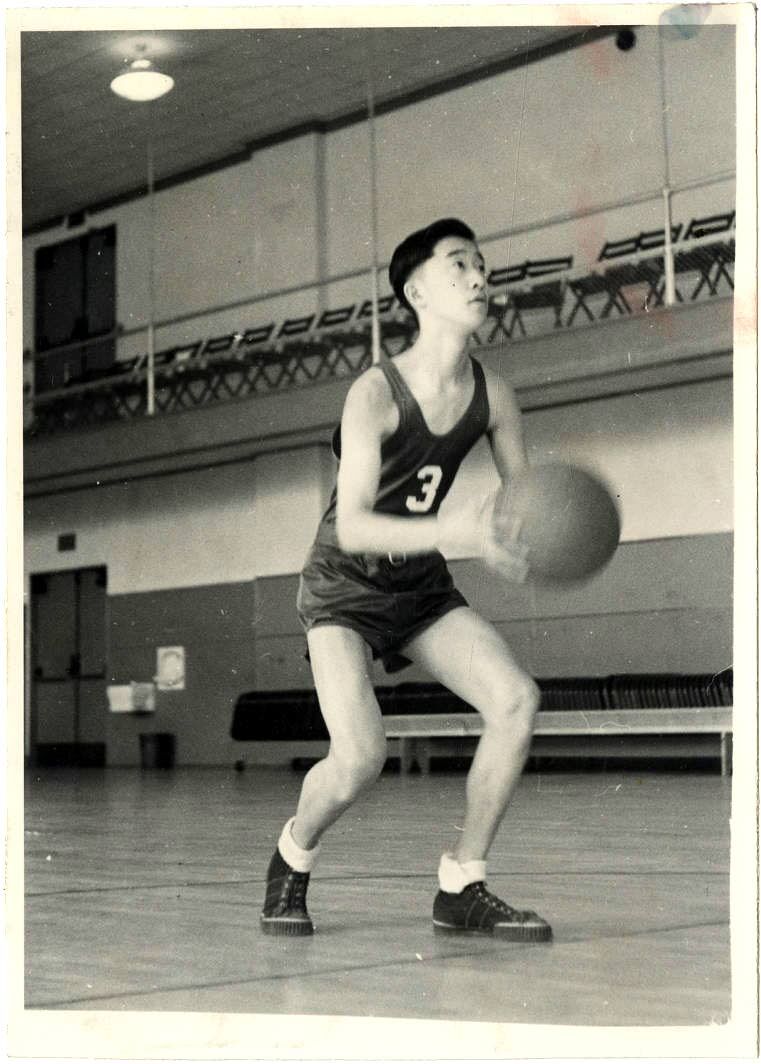 Teddy Watanabe of Colton shoots plays basketball in the community gym after the schools of Uniontown and Colton were consolidated. The photo, part of Greg Druffel's collection uploaded to Whitman County Heritage, is believed to have been take circa 1940 by W.O. Druffel. 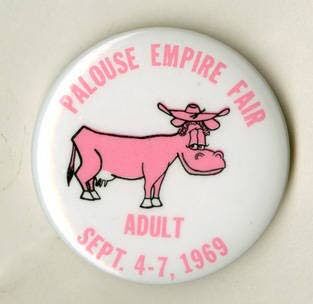 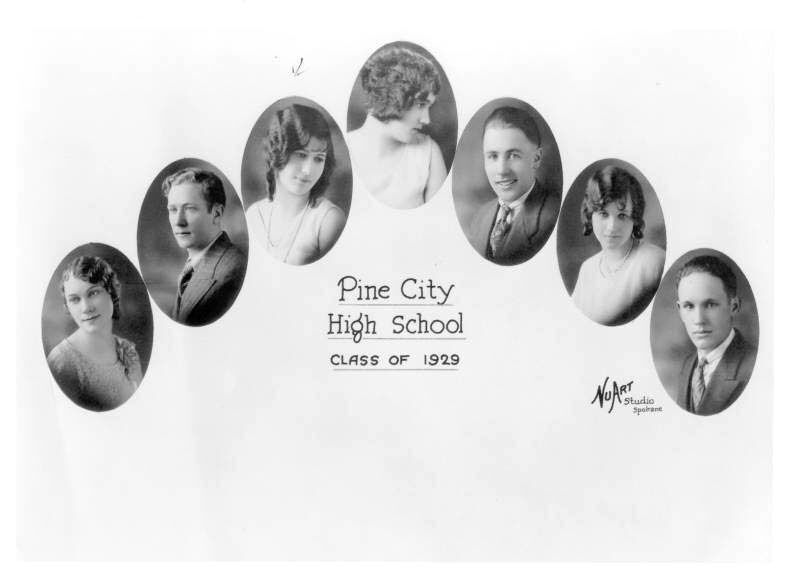 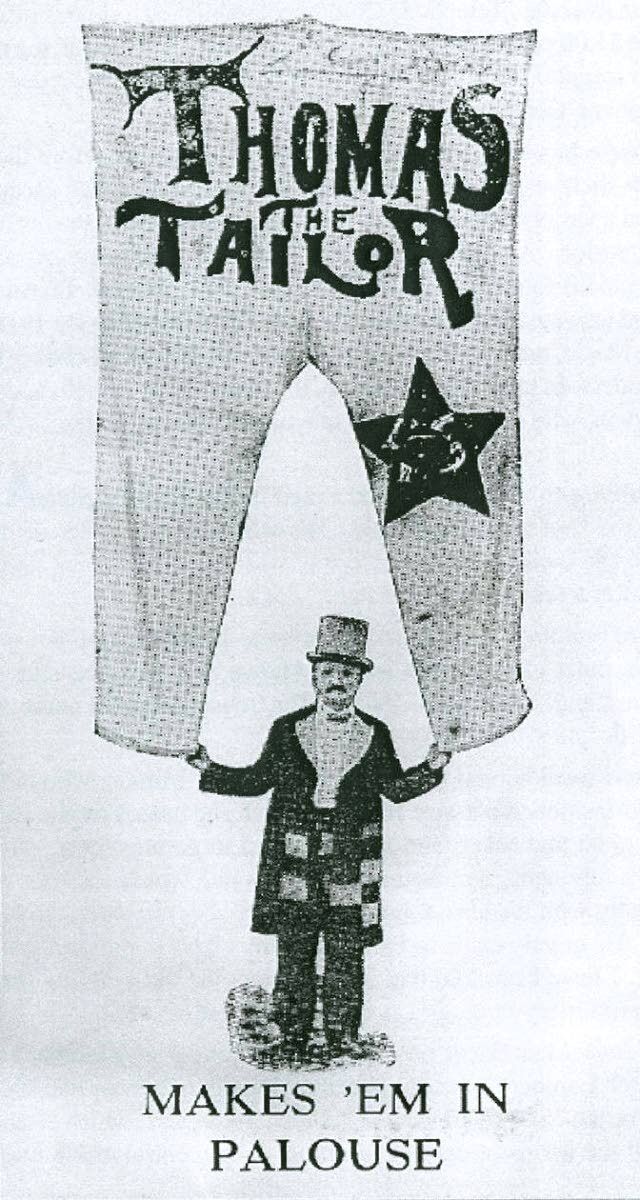 An advertisement for Thomas the Tailor in Palouse, circa 1920.

Whitman County heritageJoe Druffel’s threshing crew is seen hanging out at the cook shack in the wheat straw, circa 1925. Crews would receive three daily meals at the shack while their horses would be serviced by the teamsters.

Teddy Watanabe of Colton shoots plays basketball in the community gym after the schools of Uniontown and Colton were consolidated. The photo, part of Greg Druffel's collection uploaded to Whitman County Heritage, is believed to have been take circa 1940 by W.O. Druffel.

An advertisement for Thomas the Tailor in Palouse, circa 1920.

Visitors to Colfax City Hall are sometimes greeted by history — large prints of old photos from across Whitman County. The images might depict old buildings, local families, fairs and even postcards, and all are printed from the digital archives collected over the years by the Whitman County Library.

The collection is funded by a grant from the Washington State Library and part of the larger Washington Rural Heritage organization, which helps smaller libraries with money to help create a digital record of unique items from nearby history, thus making them available to a wider audience.

“Everything that we do is just to bring more awareness to our local history, and easy access for anybody,” said Kathy Buchholtz, an employee at Whitman County Library who took over the program about four years ago.

Key to the growth of the collection has been special “scan days,” where residents with historic photos and other documents are invited to a central location to share the stories behind them, then have the items scanned and put online for everyone to see and appreciate.

Buchholtz said working on the project has been fun for her, especially getting to know the area and hearing from everyone who comes in on scan days.

There are three scan days planned in October (at branch libraries in Rosalia, Colton and Endicott), and another three in November (Albion, Malden and Uniontown)..

When residents bring photos to scan days, Buchholtz said staff goes through the photos with the owner. Anything might be worth documenting, from the clothes being worn to the cars being driven to the crops being harvested.

Buchholz has cherished the opportunity to meet interesting people and hear their stories because of the project.

“I’ve lived in Whitman County 30 years, but I didn’t even know the county existed before I moved here … so I’m learning a lot more about Whitman County,” Buchholz said.

When not hosting scan days for the community, Buchholtz goes to museums and historical societies to see if they have anything to contribute. Contributors get to keep their photos — the library doesn’t have the space to hold them — but contributors are listed online and the gallery of their photos is named after them.

The scan days meeting are by appointment, which allows staff and the public time to look at images, select and scan the keepers, then make copies and return items all in the same visit.

Greg Druffel, a third-generation Druffel from Colton, said he’d been collecting old photos and silent videos from the area for years and looking for a good home for them.

His collection started with the photos and videos his father and uncle took when Druffel was young. The men covered events like harvesting and schools. Then, as Druffel got older, he started gathering photos from people he knew.

“I told people don’t throw them away, give them to me,” Druffel said. “I don’t want to throw good pictures away no matter if they’re very interesting or not. There’s a lot of information in that picture, sometimes you’ll get a picture that explains a whole bunch of other pictures.”

Druffel said he wasn’t always interested in history, but getting older he found all the old photos he’d gotten from his parent’s generation to be just the hook he needed. He started by posting them on a website himself as a way to save them for future generations. Now he still posts some online but also shares them with the library.

Nelson is the news clerk at the Moscow-Pullman Daily News. You can reach her with feature story ideas at knelson@dnews.com.

Whitman County Heritage has three scan days scheduled in October. Scanning is by appointment only. Those interested should contact the Whitman County Library at (509) 397-4366 or info@whitcolib.org. residents are invited to bring up to 15 photos or documents to be digitized. Originals will be returned, and digital copies will be provided at no charge.