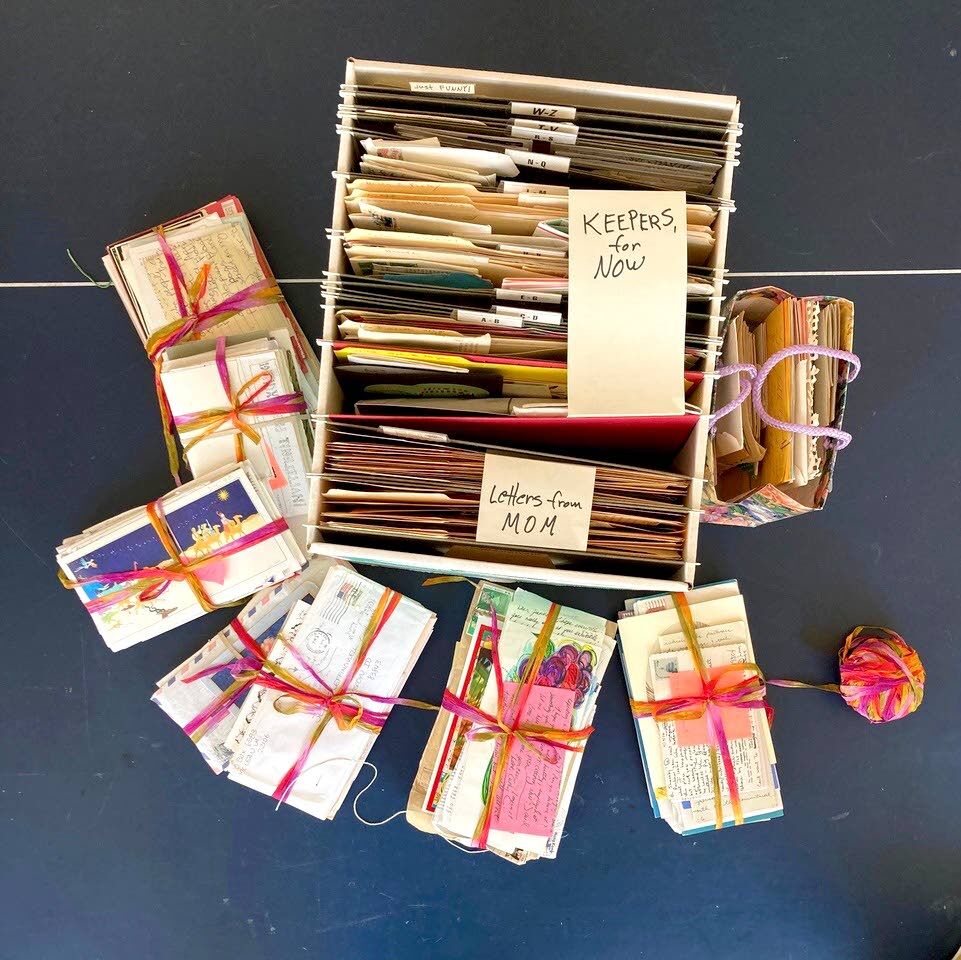 Courtesy Jeanne LeffingwellAfter working several weeks between ping-pong matches with her husband, Jeanne Leffingwell’s mounds of hand-written letters are organized. Some will be mailed to those who originally penned them, while many will be kept for walks down memory lane. 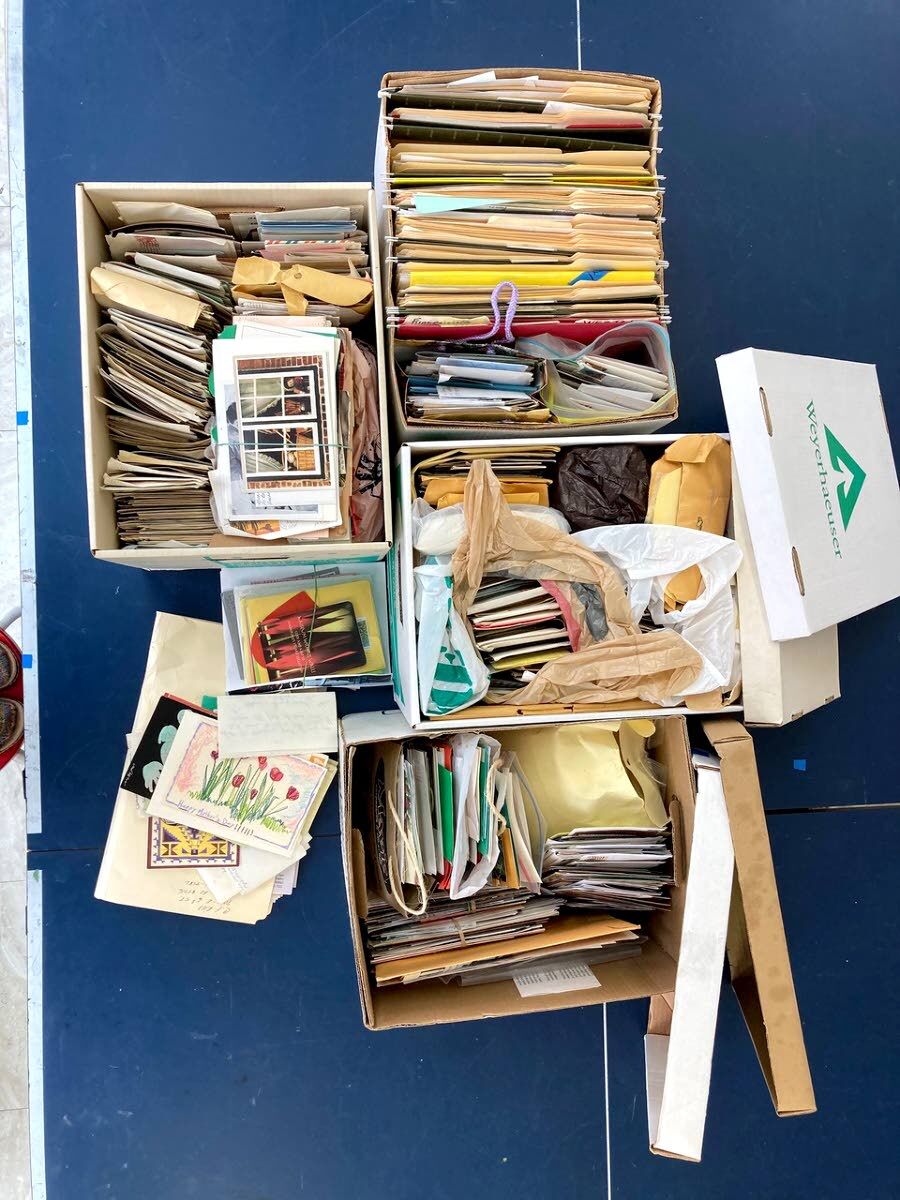 Where do I go from here? Jeanne Leffingwell's collection of written letters was impressive yet unwieldy.

Courtesy Jeanne LeffingwellAfter working several weeks between ping-pong matches with her husband, Jeanne Leffingwell’s mounds of hand-written letters are organized. Some will be mailed to those who originally penned them, while many will be kept for walks down memory lane.

Where do I go from here? Jeanne Leffingwell's collection of written letters was impressive yet unwieldy.

It started with four bankers boxes of miscellaneous letters from friends, family and acquaintances. The collection began more than 40 years ago, about the time many of my friends and I were splitting off to college. If you wanted to maintain a friendship, letter writing was the standard method. Over the next two to three decades, as my world expanded, there were more friends, and of course family members that I kept up with via letters. Then it all began to peter out.

Enter email, soon to be required in the workplace. The immediacy of it began to win out for personal communications, too. Then came Facebook, WhatsApp, Instagram, and an exponentially increasing number of other platforms. Now, with the click of a finger, we can instantaneously keep up with not just one pal, but a whole slew of them at once. For me, the jury’s still out about the advantages of all that. It’s a little lopsided.

For one, “social media” is nothing like letter writing. You may pour your heart out, and get no response at all. Or depending on your “settings” you may let it all hang out, and get 1,001 comments. Who are these “friends” anyway? Half of them might be enemies. Who needs that?

Think about it. In 1845, only a handful of generations ago, the fastest steam-powered ship took two weeks to carry a letter across the Atlantic Ocean. In 1860, an incredible 10 days was all it took to send a letter by Pony Express from the eastern U.S. to California, if you could afford the going rate of $5 per ½-ounce. Though it lives on in Western lore, the Pony Express went bankrupt within 18 months. In 1861 it was eclipsed anyway, by the cross-continental electric telegraph, which allowed rumors as well as news to travel so much faster.

Fast-forward another 20 years, to 1881-1883. Adolphus Greely’s Lady Franklin Bay expedition (see note below) didn’t benefit from the telegraph; there were no lines installed yet in the arctic. He stashed letters and directions in rock cairns, hoping they would be found during ice-free summer months by re-supply ships, so that what was left of his ill-fated crew, originally 24 men, would be rescued. It sort of helped, if you want to think so, after the second year of waiting.

But here we are, less than 200 years after that steamship crossing. In my own lifetime: the first satellite, an international space station … the worldwide web … fiber-optic Internet … wireless 5-G. Help! I’m trying not to be a Luddite.

So let’s get back to those four boxes of unsorted letters. To recap: My first step was to cull what no longer qualified for storage real estate, and then divide up the rest either by groups of years, or by correspondents, whichever was easier. Not really reading anything yet, I pretty much just plowed through, tossing old birthday cards, baby announcements, outdated Christmas greetings (with the exception of one girlfriend’s hilarious year-end wrap-ups) and burning another old boyfriend’s letters. What remained fit into one of the following categories:

Consolidate and mail back to sender.

Surely, it would be a hoot to receive an autobiographic bundle from your past, in your very own handwriting.

Now it was time to open and read some, starting with the peruse-and-probably-pitch piles. Sure enough, as my wise daughter once opined, “It was fun to see this again, but I don’t need to keep it forever.”

Next, rereading when I felt like it, I compiled the letters from half a dozen old friends, and went to hunt down their current addresses.

I suspected the whole project would take 3-4 days, and of course it took a couple weeks, but it wasn’t so hard. I was forced to stay organized and keep progress notes because each evening I had to clear off the ping pong table. That was because my newly retired husband and I have been volleying every day. There’s something about 30 minutes of fixation on a little ball whizzing back and forth that counteracts the risks of spending too much time down memory lane.

But the whole letter-sorting thing was fun. There’s absolutely no comparison to purging emails, every second of which I resent.

I haven’t gone through all the peruse-and-probably-keep letters, or the thick file from my mother. But I’m going to stop where I am. What remains is a collection of friends, memories, and special visits I’ll save for another day. There’s also a small bag of letters my husband and I wrote to each other, mostly over the five years way back when we were just friends who wrote letters, before we fell in love.

How did any of us find that much time to write letters? What are we doing now that we didn’t do then? Is it better? Have we replaced it with another activity where we sit with our thoughts, think about what to say, choose our words, and take the time to put marks down on paper, for one other person? Who may not even receive them for several days? I can only answer for myself, but it’s made me grateful I was born when I was.

All my letters fit into one box now. It’s bittersweet to realize how unlikely it is that many more letters will join them.

I’m done for now though. Or will be, after I mail off those packets to my old buddies. But first I’m going to write a little letter to include with each one.