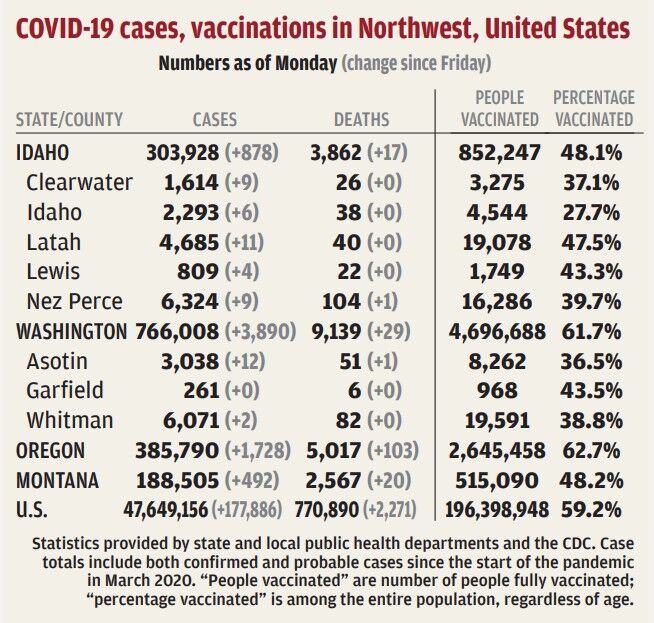 BOISE — Idaho’s top health official has deactivated crisis guidelines for rationing care at most of the state’s hospitals.

Jeppesen and other health care officials during a news conference warned of possible future outbreaks.

“We are not sharing a ‘mission accomplished’ message,” said James Souza, chief medical officer for St. Luke’s Health System. “We don’t believe this will be our last surge of COVID. We hope it’s the worst one.”

Crisis standards of care give legal and ethical guidelines to health care providers when they have too many patients and not enough resources to care for them all. They spell out exactly how health care should be rationed to save the most lives possible during a disaster.

Health officials said it will take time to catch up on routine surgeries that have been put off. They also said they expect people who have been afraid to seek treatment because of the crisis standards will finally come in and discover they need surgeries as well.

Jeppesen convened the Crisis Standards of Care Activation Advisory Committee on Friday to review the situation, the agency said. The committee determined most health care systems could move back to contingency operations.

The agency said the deactivation process began when health care systems started individually reporting they had moved to contingency operations instead of crisis standards.

Health officials were cautious about making any predictions about the future of the pandemic, other than noting that getting more people vaccinated would help.

“I think there is a light at the end of the tunnel,” said Patrice Burgess, executive medical director at Saint Alphonsus in Boise. “I don’t know yet when exactly that is, but I do think we’ll get there.” Nearly 4,000 Idaho residents have died due to COVID-19 since the pandemic entered the state in spring 2020, state officials report.

Local health agencies reported 23 new COVID-19 cases and no new deaths on the Palouse since Friday.

Public Health – Idaho North Central District reported 11 new cases in Latah County. They include two people in their 30s, five in their 40s, one in their 50s, two in their 60s and one in their 70s.

There have been 4,372 confirmed cases, 313 probable cases and 40 deaths in Latah County since the pandemic began.

Whitman County reported 12 new cases. There have been 6,071 cases, 82 deaths and 224 hospitalizations in the county since the beginning of the pandemic.

According to Whitman County Public Health, there have been 113 cases between Nov. 7 and Saturday. This is considered “moderate” COVID-19 activity.