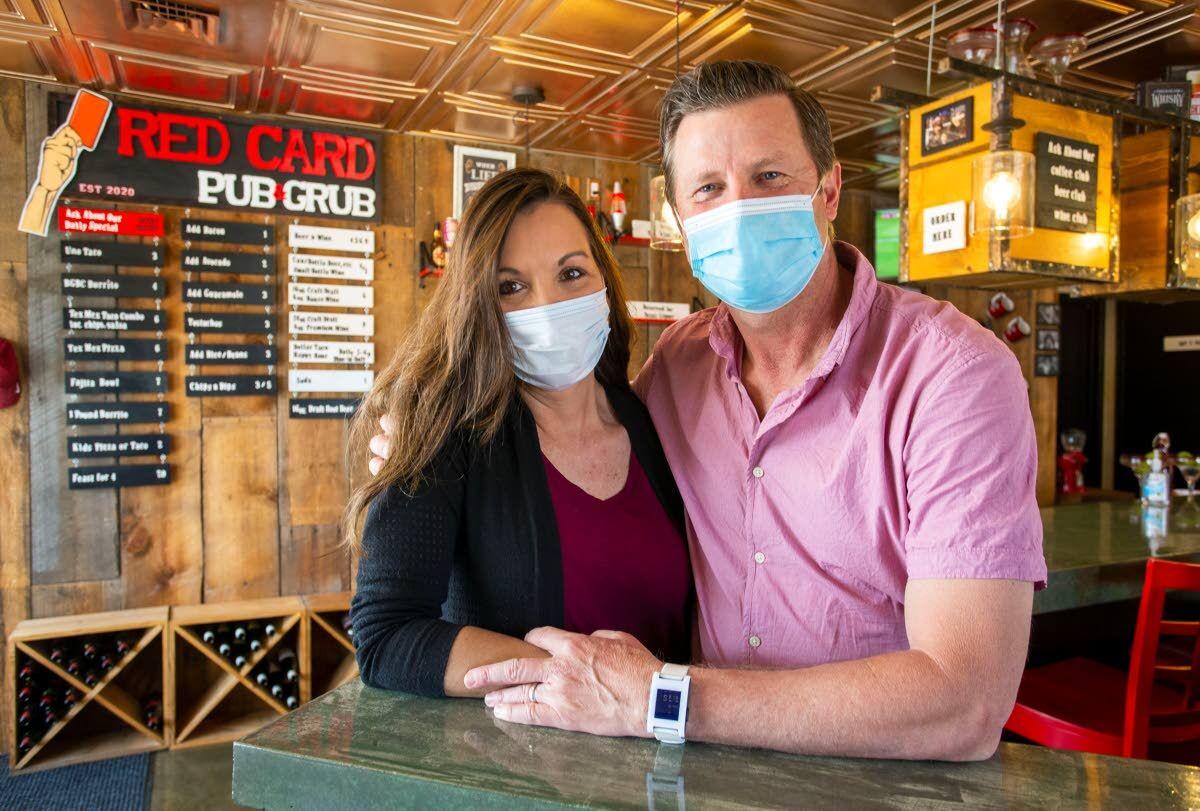 Greg and Gena Sheen are the owners of Red Card Pub & Grub on Bishop Boulevard in Pullman. The business opened June 1.

The Red Card Pub & Grub in Pullman has local and regional beers, wines, and root beer on tap. The business plans to add liquor to the drink menu soon.

Greg and Gena Sheen are the owners of Red Card Pub & Grub on Bishop Boulevard in Pullman. The business opened June 1.

The Red Card Pub & Grub in Pullman has local and regional beers, wines, and root beer on tap. The business plans to add liquor to the drink menu soon.

The owners of a new Tex-Mex restaurant in Pullman have been taken aback not only by the kindness of their customers, but of the locals’ heat tolerance as well.

“We’ve been overwhelmingly surprised at just how spicy a lot of the Pullman residents want their food,” Greg Sheen said.

Greg and his wife, Gena Sheen, opened the soccer-themed Red Card Pub & Grub at 588 SE Bishop Boulevard in June. Greg described it as a “a cozy little place to grab a bite and a drink where the soccer and the grill are almost always on.”

It was supposed to start operating in April until the COVID-19 pandemic forced them to delay the opening, Greg said.

Despite their fears about starting a business under uncertain circumstances, the Sheens say the restaurant has enjoyed early success thanks to local residents.

“We’ve been overwhelmed at the show of support in the Pullman community,” Greg said.

They said there are already groups of regulars who dine there and have become friends with the Sheens. Gena said the customers have been patient as the owners have worked through the kinks of opening a new restaurant.

“The people of Pullman have been so kind and gracious, even when it did take a few extra minutes to get them their food,” she said.

Red Card offers beer and wine as well as Tex-Mex dishes such as tacos, a 1-pound burrito, fajita bowl and a Tex-Mex pizza. The Sheens also make their own sauces and dips, and make them as spicy as the customers want.

Greg said now was the right time to start a restaurant. He retired after spending two years as an assistant coach for the Washington State University soccer team. It concluded a 25-year coaching career where he spent time coaching at places like University of Dayton, University of Miami and University of Texas-San Antonio.

He ended that career on a high note as the Cougars made it to the semifinals of the NCAA College Cup this past season.

After retiring, Greg wanted to do something with the next chapter of his life that would allow him to spend more time with his wife and family.

They decided to stay in Pullman and bring their own spin on Tex-Mex to the Palouse. They will eventually retire in Texas, where their relatives live.

Staying true to Greg’s passion for the sport, soccer games will be playing on Red Card Pub & Grub’s televisions while customers eat and drink. The name of the restaurant references the penalty soccer players receive for misbehaving.

“Basically, you get a red card in soccer for fighting, spitting, kicking, cussing, all sorts of things,” Greg said. “And it’s basically the same thing here. Those are our rules. If you don’t break any of those rules, you can stay. And we even allow some cussing.”