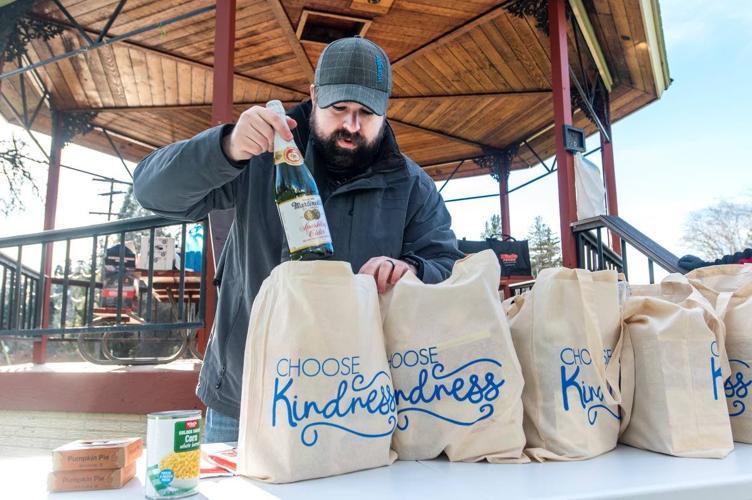 Rob Larsen, of Pullman, puts together bags of food containing typical Thanksgiving dishes Wednesday afternoon for a giveaway by the Food Security of the Palouse at Reaney Park in Pullman. Larsen acknowledged that many people have endured hardships over the last two years and said he wanted to give back to the community. 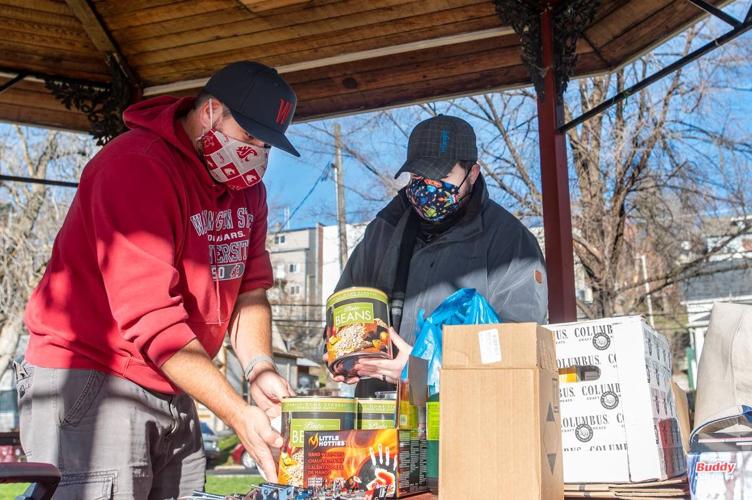 Brandon Chapman, left, donates food to the Food Security of the Palouse at Reaney Park Wednesday afternoon in Pullman.

Rob Larsen, of Pullman, puts together bags of food containing typical Thanksgiving dishes Wednesday afternoon for a giveaway by the Food Security of the Palouse at Reaney Park in Pullman. Larsen acknowledged that many people have endured hardships over the last two years and said he wanted to give back to the community.

Brandon Chapman, left, donates food to the Food Security of the Palouse at Reaney Park Wednesday afternoon in Pullman.

Pullman resident Rob Larsen wanted to make sure struggling families and students staying in town over the fall break would still have the means to put together a nice Thanksgiving meal.

“It’s been a hard couple of years for everyone,” Larsen said. “I know a lot of people could use the help and I’ve been doing pretty well so I’d figured it’d be a good way to give back. I also feel bad for the students who end up stuck in town with no way to travel home and could use a helping hand themselves.”

The pair also handed out free pizza, donated by Domino’s, to those who showed up and donated nonperishable food or other items.

“When I was first snowballing the idea on Reddit, some people reached out to ask how they could help,” Larsen said. “One person, who I don’t even know their actual name – just their username, donated about $200. We took that directly and it went towards all the protein.”

He added that the company he works for has a policy called 24 for others, where employees can get a paid day off to participate in some kind of charitable act.

Larsen said he was also inspired by sports writer Brian Floyd, who he follows on Twitter. Floyd often helps out at the Bonney Lake Food Bank south of Seattle.

“That’s kind of the area where I grew up so I was interested in the topic,” Larsen said. “(Floyd) kept talking about how donations have been record-high this year, but also, usage has been higher than they’ve ever seen before.”

Brandon Chapman, Pullman City Councilmember and director of marketing and communications at the WSU College of Education, came by the park to drop off canned goods for donation.

He said it’s great to see people in the community step up and help others.

“They’re willing to do something, (but) not because there’s any reward behind it other than the knowledge they’re helping somebody,” Chapman said. “I really appreciate that, and I’m proud of them for doing this. It’s also cool there were organizations in town who were willing to contribute.”

Larsen, who graduated from WSU in 2009, knows what it’s like to be a college student stuck in town over the break.

He decided to start a group called Food Security of the Palouse, and even paid for the domain name fsotp.com to direct people to the Reddit thread discussing the effort.

“Pullman’s a nice, inviting community, but there’s a pretty big disconnect when you live up on College Hill and can’t afford to make it home,” he said. “Those students are particularly underserved just because they don’t have the same access to shelters and food banks.”

Larsen said he’s interested in doing another giveaway over the holidays or possibly next year during the summer. One thing he wanted to stress about the free meal kits is that there were no questions asked.

He didn’t want anyone to feel obligated to donate to a specific charity or feel pressured to attend a religious service or meeting.

“The ability to help out during break and give people a taste of Thanksgiving food that they’re used to was important to me,” he said. “That’s something I always had growing up, so I wanted to make sure other people had access.”