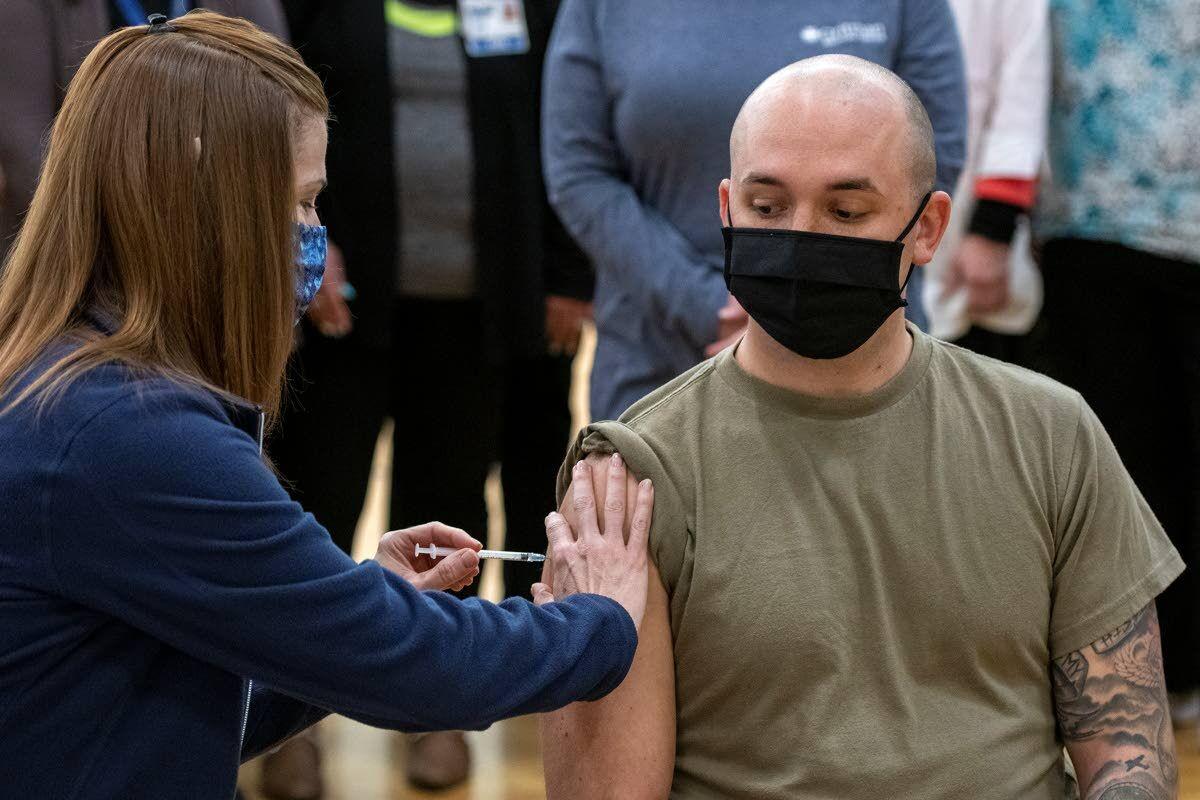 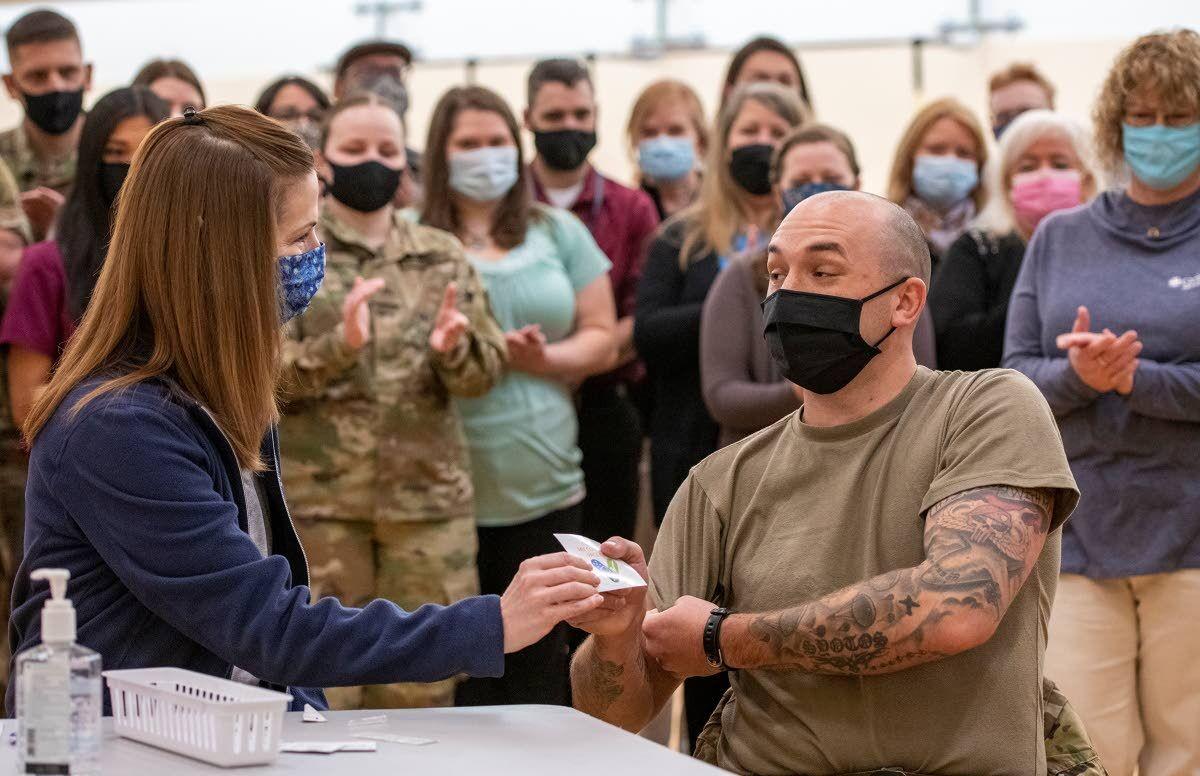 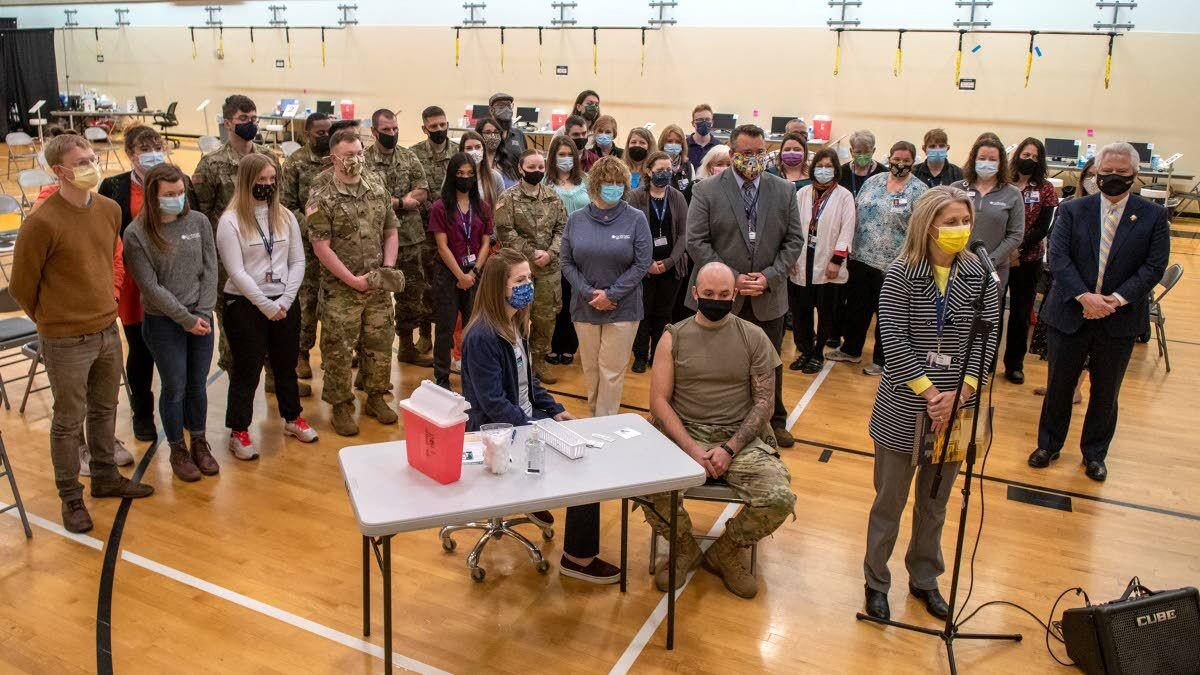 Inside the University of Idaho Student Recreation Center on Friday morning, Gritman Medical Center CEO and president Kara Besst stands in front of Gritman employees, members of the Idaho National Guard and University of Idaho staffers as she gives an announcement prior to Sergeant Jacob Eiland receiving the 10,000th COVID-19 vaccination administered by Gritman.

Inside the University of Idaho Student Recreation Center on Friday morning, Gritman Medical Center CEO and president Kara Besst stands in front of Gritman employees, members of the Idaho National Guard and University of Idaho staffers as she gives an announcement prior to Sergeant Jacob Eiland receiving the 10,000th COVID-19 vaccination administered by Gritman.

Gritman Medical Center in Moscow administered its 10,000th dose of COVID-19 vaccine in a small ceremony Friday morning at a makeshift clinic set up in the University of Idaho’s Student Recreation Center.

Gritman spokesman Peter Mundt said the achievement was made possible through the hard work and long hours put in by hospital staff, UI employees and the Idaho National Guard.

“On Wednesday, the State of Idaho is reporting a little over 13,000 vaccine doses administered in Latah County, and now 10,000 of those are through Gritman Medical Center,” Mundt said. “There are a number of other vaccine providers, of course, hundreds across the state of Idaho, who are doing their job to help vaccinate the public, but this obviously has been a Herculean lift by the people that you see and many who can’t be here today.”

In her brief remarks, Gritman President and CEO Kara Besst said it would not have been possible to get this far in the local vaccination effort this quickly without its partnership with the UI.

UI President Scott Green agreed, saying even before vaccines became available, this partnership was instrumental in constructing a COVID-19 testing program that has been critical to the school’s ability to remain open for in-person instruction.

“It was about this time a year ago, when we sat down and I asked (Besst), ‘We’ve got some great talent in our faculty, we believe we can set up a lab and can we partner on this? Because we can’t do it ourselves,’” Green said. “She immediately said yes, and set in motion what has turned out to be probably one of the most effective testing and vaccination programs in the state and frankly in the region.”

As of Friday, Green said the count of tests administered through these efforts was nearing 40,000.

The 10,000th dose was given to Idaho Army National Guardsman Sgt. Jacob Eiland. The moment was over in a matter of seconds.

“I haven’t been up here as long as most the other guard members behind me, but I know we’re all happy to be here and happy to be able to help out our community and the best way that we can,” Eiland said when the deed was done, tugging his fatigues back over his T-shirt. “We’ll continue to do so until we can move forward with the vaccine.”

In a Friday press release, the Washington Department of Health announced it will send a mobile vaccination unit to Pullman to supplement existing sites in the region.

According to the release, a special vaccination event will be held when the unit arrives, running from noon to 4 p.m. Thursday at Schweitzer Engineering Laboratories, 2390 Northeast Hopkins Court.

Residents age 18 and older can make appointments at https://bit.ly/3x1WzO5 to receive their first dose during the Thursday event. Second doses will be scheduled for May 20.

As of Thursday, all Washington adults are eligible to receive the vaccine.

Also Friday, the Whitman County Department of Health rescinded its emergency order issued earlier this month which limits outdoor social gatherings to 10 people. The move clears the way for Phase 2 regulations which allow for outdoor gatherings of up to 15.

Washington Gov. Jay Inslee announced Monday that Whitman County, along with two other Washington counties, would be moved from Phase 3 back to Phase 2 of his Healthy Washington Plan.

Whitman County reported 14 new cases of COVID-19 on Friday, pushing its total to 4,074. Deaths and hospitalizations related to the virus remained steady at 47 and 100 respectively.

According to the district’s website, 2,869 people in the county have recovered from the virus since the pandemic began and 10 have died.