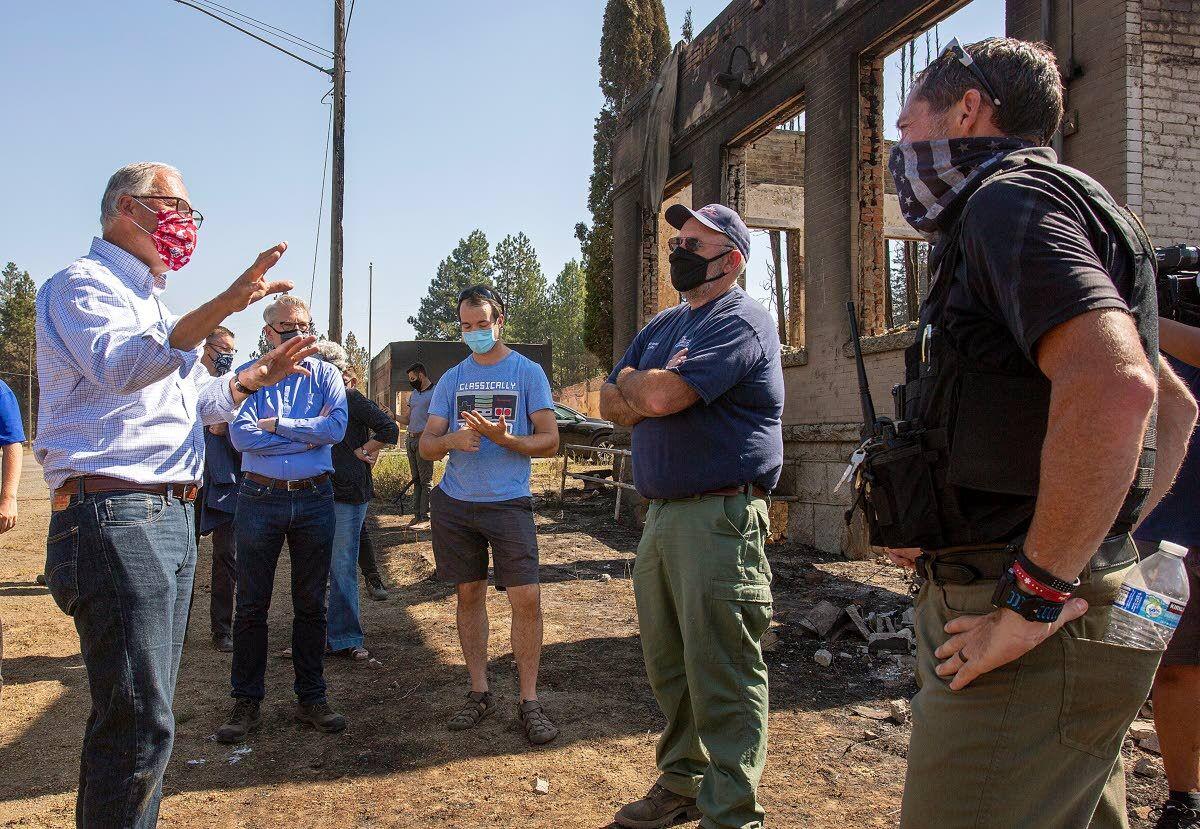 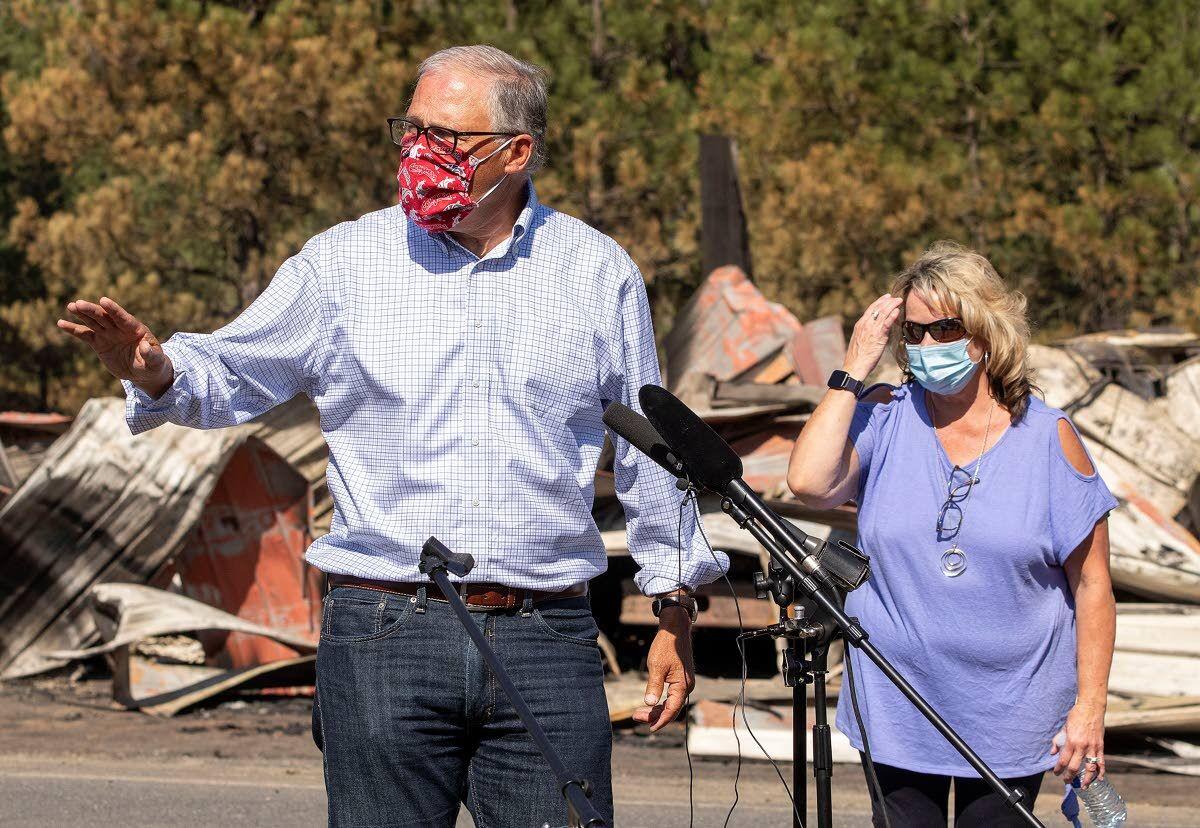 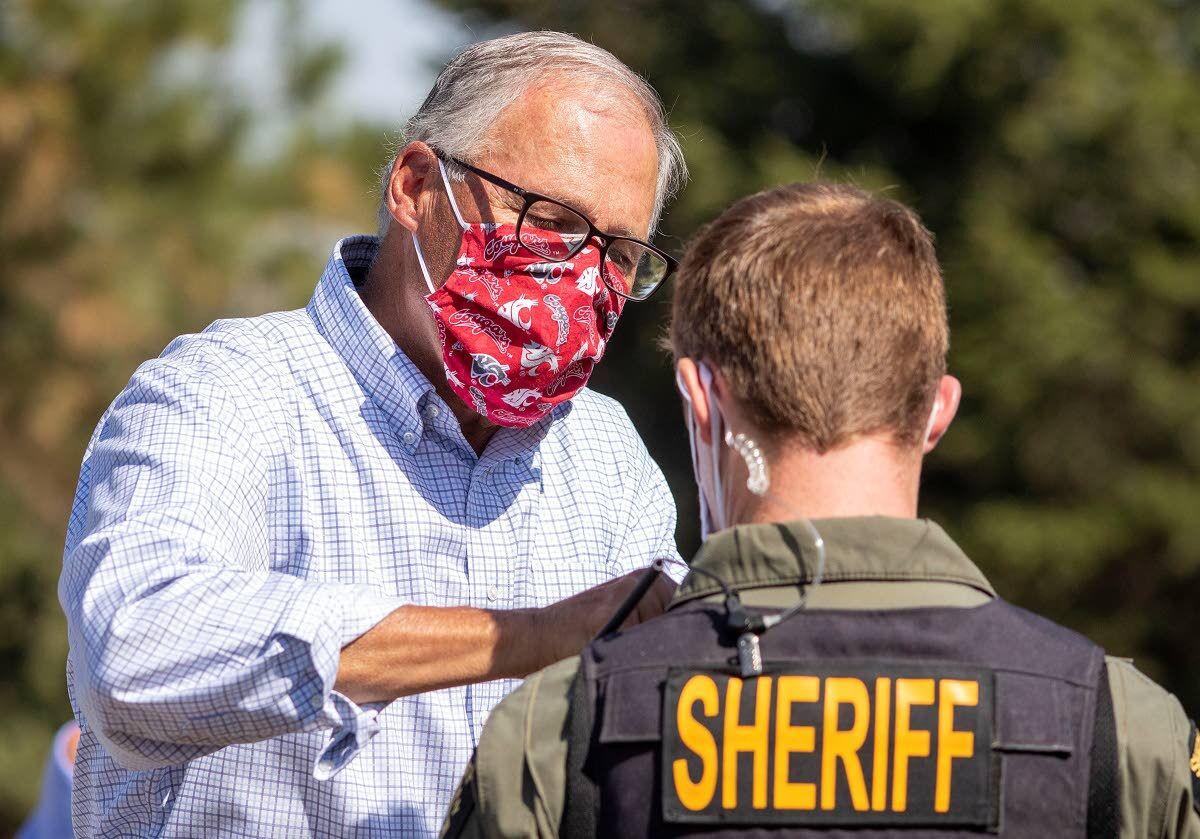 Washington Gov. Jay Inslee pins an apple pin on Whitman County Sheriff's Deputy Mike Melcher after naming him Washingtonian of the Day on Thursday in Malden. 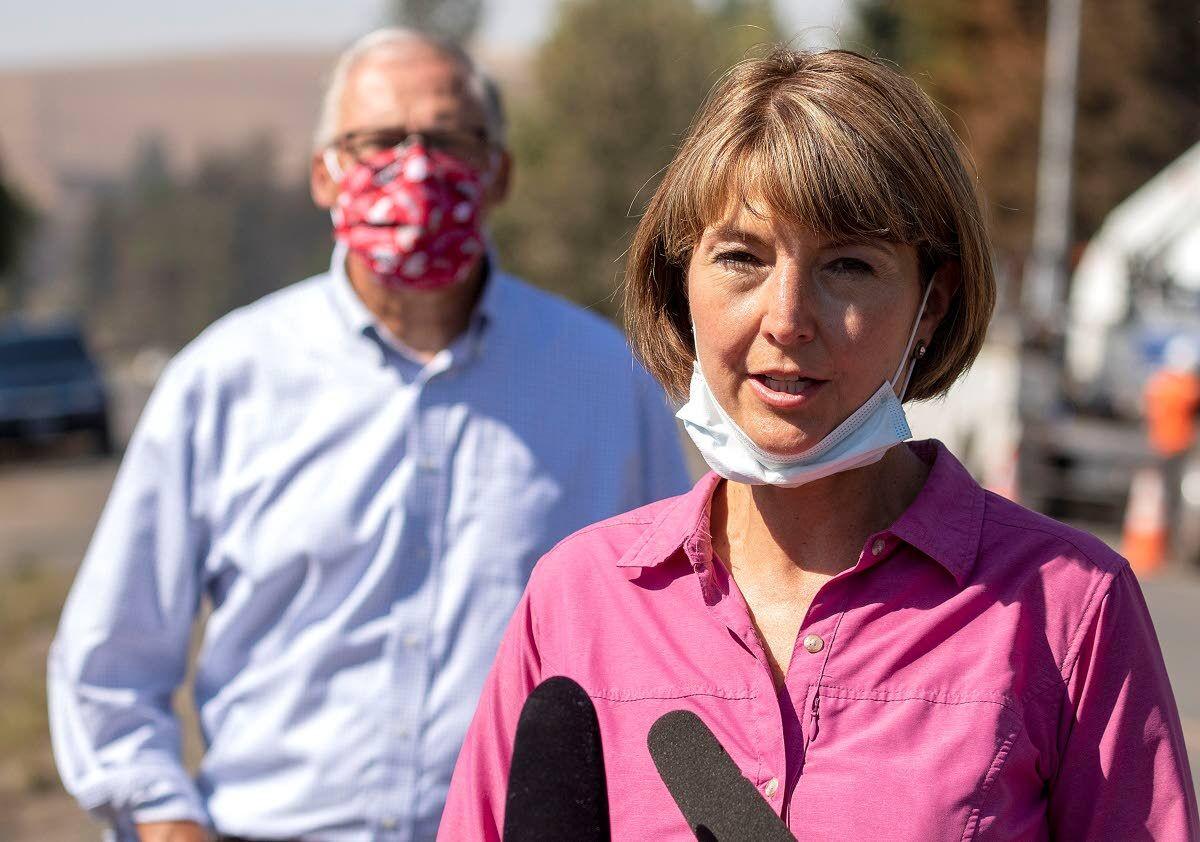 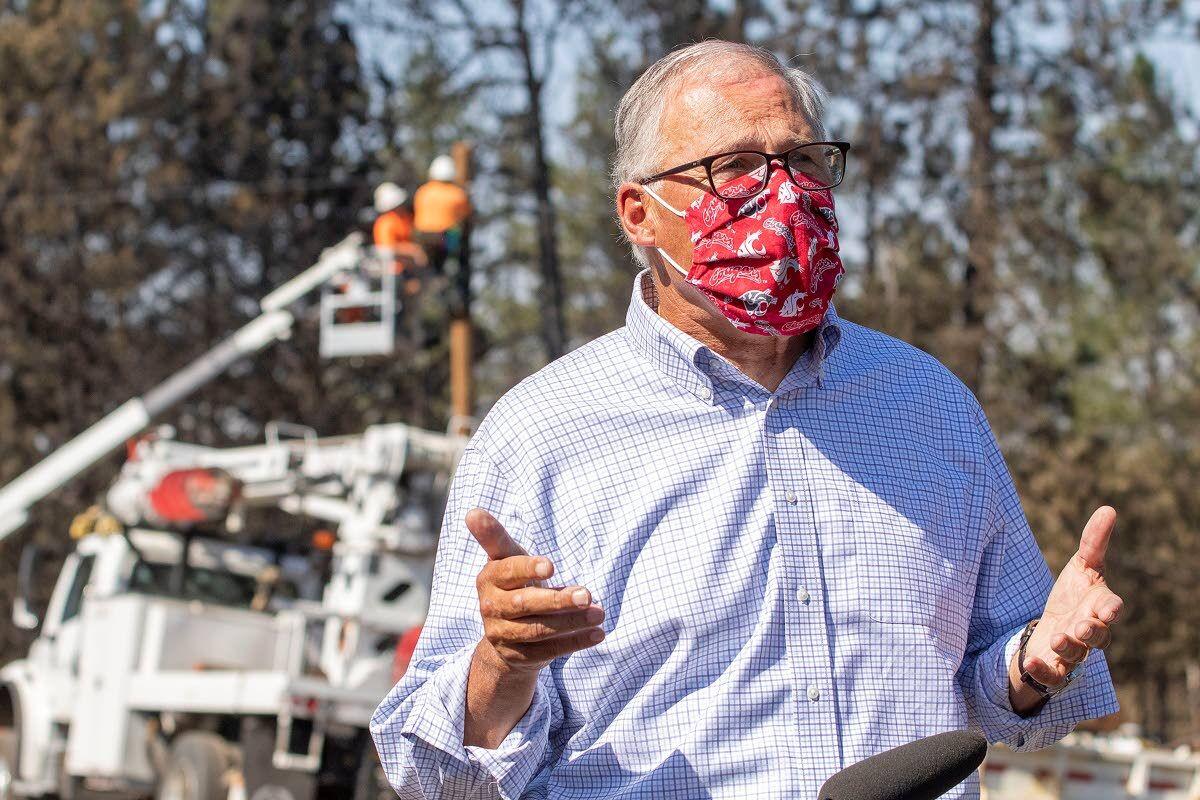 Washington Gov. Jay Inslee speaks during a press conference on Thursday in Malden while linemen repair a damaged power pole. Inslee was visiting Malden to meet with first responders and community members after the town was damaged by a wildfire on Monday. 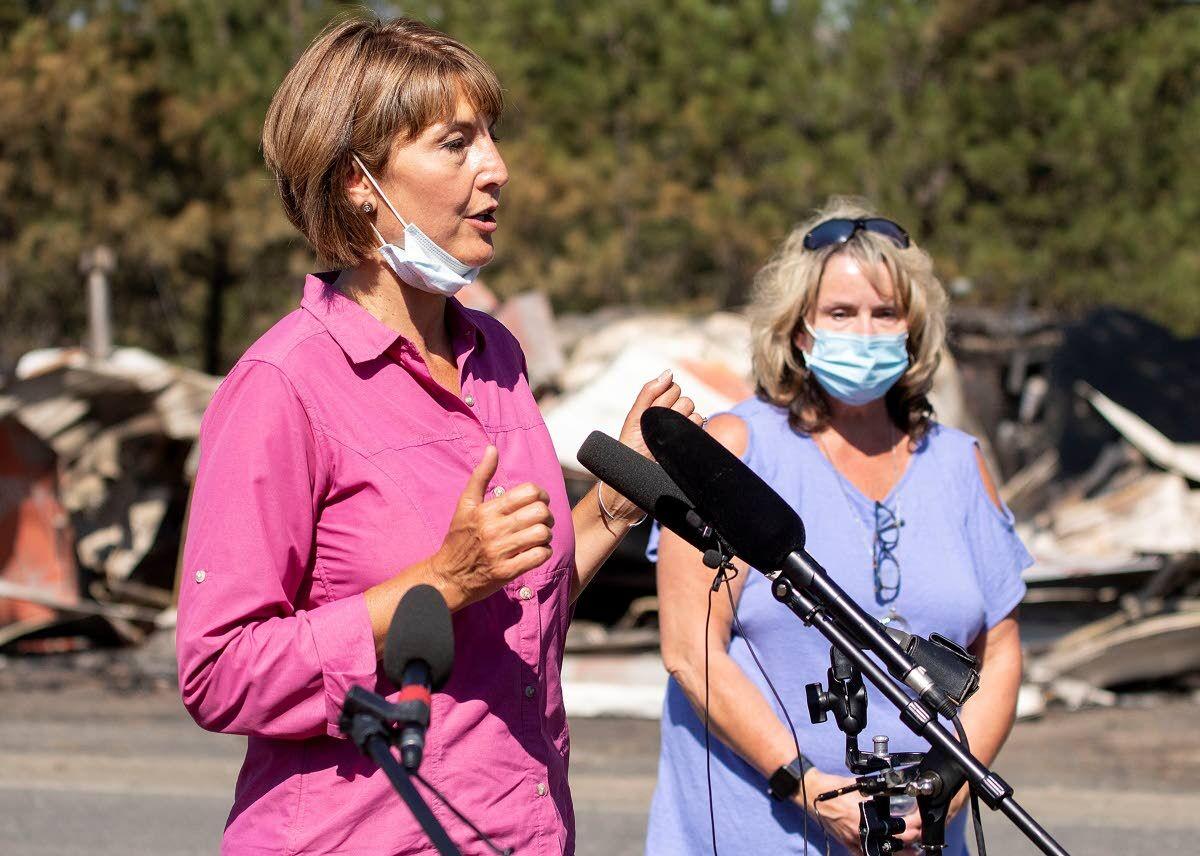 Washington Gov. Jay Inslee pins an apple pin on Whitman County Sheriff's Deputy Mike Melcher after naming him Washingtonian of the Day on Thursday in Malden.

Washington Gov. Jay Inslee speaks during a press conference on Thursday in Malden while linemen repair a damaged power pole. Inslee was visiting Malden to meet with first responders and community members after the town was damaged by a wildfire on Monday.

MALDEN, Wash. — Washington Gov. Jay Inslee on Thursday called Malden the “center of our heartbeat” in a state that has been ravaged by wildfires this week.

“I don’t think it’s a stretch to say that this is the symbol of both our trauma and our commitment to rebuilding and to our commitment to dealing with the fundamental forces that are making these fires so cataclysmic,” Inslee said during his stop in the small Whitman County town.

On Monday, a fire, aided by high winds, destroyed 121 homes, eight commercial properties and 94 other structures in Malden and nearby Pine City.

Inslee said in the past three days, the state has lost almost 600,000 acres to wildfires.

“In the last three days, we have lost more acreage to fires than in any single entire year in the history of the state of Washington except 2015,” he said. “The enormity of these fires, the geographical scope, the intensity and the destruction are unequaled in Washington state history. And we’ve got to rise to that challenge and help those folks who have been so traumatized by these events.”

Inslee on Thursday declared a state of emergency and freed several hundred thousand dollars in emergency funds to give wildfire victims cash for food, clothes and other essentials.

“I plan to put together pictures from today and impress upon the Trump administration the importance of a quick turnaround, that this really is like nothing we’ve ever experienced before,” she said.

Inslee said the heat, wind and lack of humidity have contributed to this year’s blazes. He said the severity of these recent wildfires is evidence of how climate change is affecting Washington.

Inslee said the state has been spending millions of dollars thinning forests so that they are less “explosive.”

Inslee credited the Whitman County Sheriff’s Office and other first responders for their assistance in evacuating Malden and Pine City. He recognized Deputy Mike Melcher as Washingtonian of the Day for helping lead those evacuation efforts. No one was killed by Monday’s fire.

Sheriff Brett Myers praised his staff and credited the community members for heeding the evacuation warnings.

He said during times of tragedy his staff often interact with people during their darkest hours, but they also get to witness their finest moments as well. Myers said that is what they saw from the county’s emergency services, fire districts, law enforcement and Avista.

“I think we will come out of this on the other side better for it,” he said.

Inslee also praised Malden Mayor Chris Ferrell for her leadership this week. Ferrell expressed her gratitude that no one was killed by the fire and that everybody in the city found a place to stay after they evacuated.

She said the city needs to train homeowners on how to keep their homes safe from fires. Ferrell said she is hopeful those homeowners will return to Malden again.

United Way of Whitman County is helping coordinate donations to those affected by the local fires in Malden, Pine City and Colfax.

The nonprofit stated in a news release there has been an outpouring of donations. Volunteers are asking those wanting to donate to focus on essential items like toiletries, clothes, batteries, flashlights, garbage cans and bags.

Small-dollar food and gas cards are in great need, as well as permanent housing for families displaced by the fires. Those wanting to donate money can do so at donorbox.org/whitman-county-fire-relief-fund or they can send it to United Way of Whitman County, PO Box 426, Pullman, WA 99163.

Items can be donated at Gifted Granny’s Gift Shop, Rosalia Community Center, Rosalia Harvest Assembly Church and Rosalia Baptist Church. The collection site in Malden is the Malden Community Church. The Colfax Eagles donation site is 217 N Main St. in Colfax and it is open 5-10pm.

After his stop at Malden, Inslee traveled to Pullman to discuss issues related to COVID-19 with Washington State University and city leaders.

Pullman, particularly College Hill, has seen one of the worst outbreaks of COVID-19 in the country. Inslee said the transition to remote learning has not slowed the spread of the virus.

The governor said he hopes to take the lessons learned in Pullman and share them with other Washington colleges to help them fight COVID-19.