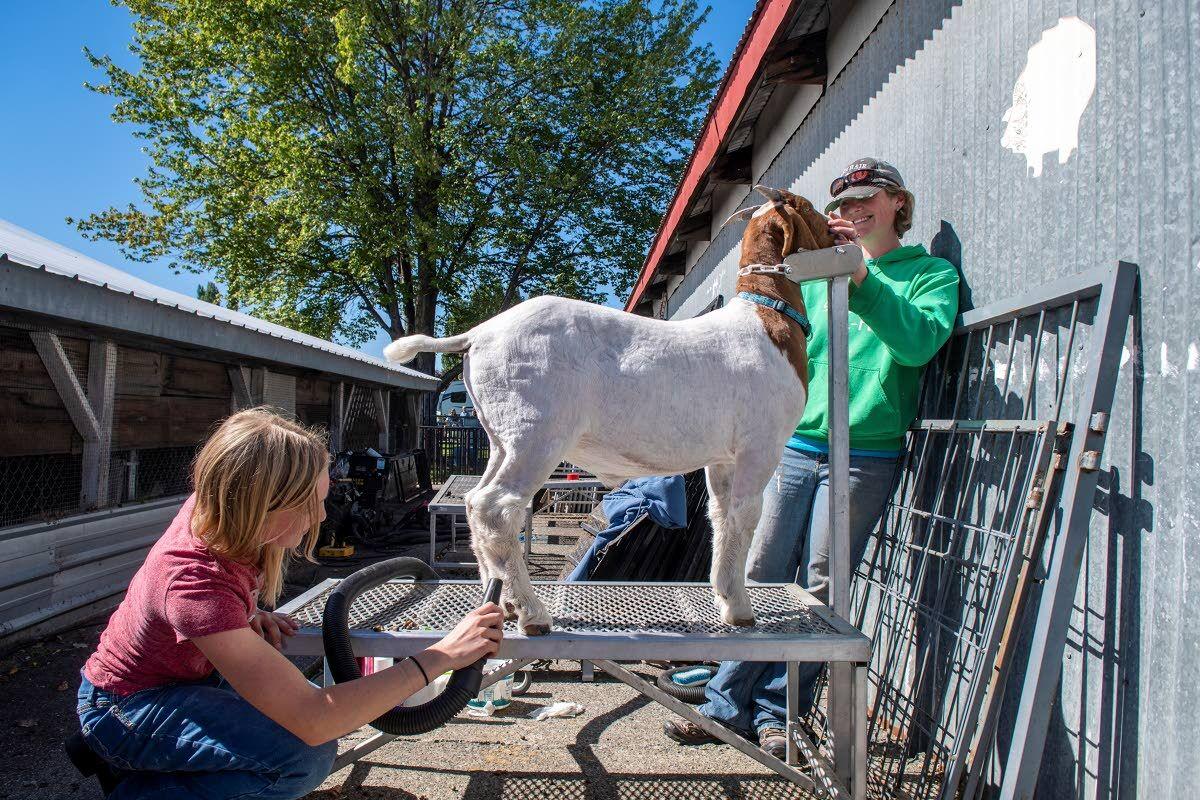 Zach Wilkinson/Daily NewsScarlet Donigian, 11, of Deary, dries her goat, Frank, as her mother, Tiersa, gently pets his nose Thursday afternoon in preparation to compete in the FFA & 4-H Goat Quality at the Latah County Fair in Moscow. 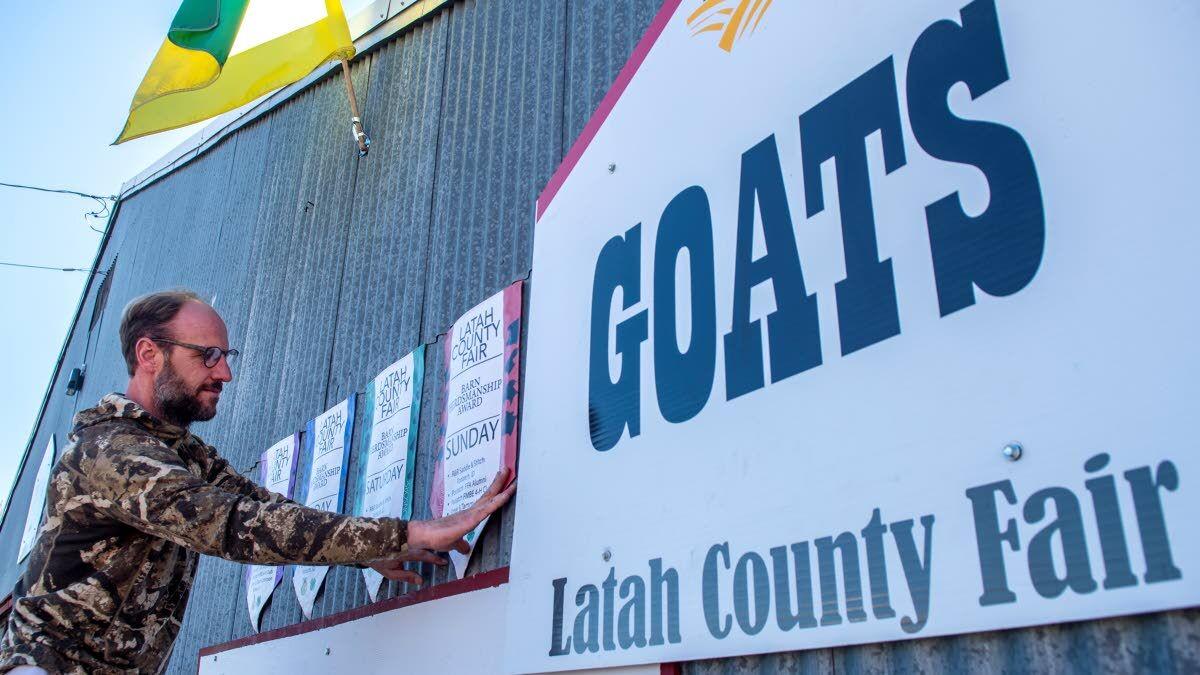 President of the Game Bird Foundation, Tiere Ulschmid, hangs banners to promote the Barn Herdsmanship Award, which goes from Thursday to Sunday, at the Latah County Fair Thursday afternoon in Moscow.

Zach Wilkinson/Daily NewsScarlet Donigian, 11, of Deary, dries her goat, Frank, as her mother, Tiersa, gently pets his nose Thursday afternoon in preparation to compete in the FFA & 4-H Goat Quality at the Latah County Fair in Moscow.

President of the Game Bird Foundation, Tiere Ulschmid, hangs banners to promote the Barn Herdsmanship Award, which goes from Thursday to Sunday, at the Latah County Fair Thursday afternoon in Moscow.

Frank the goat stood patiently on a platform Thursday at the Latah County Fairgrounds in Moscow as his owner used baby powder to freshen up his bright white coat of fur.

Frank’s owner, Deary sixth-grader Scarlet Donigian, is a seasoned veteran at this process. She has shown animals at the Latah County Fair on four occasions and was even named the grand champion for quality her first year, she said.

The 4-H member said prepping the goat and exercising him every day is a challenge, but it is all worth it once September arrives.

“I enjoy getting to show my animal and probably the competition part of it,” she said about the fair.

Competitions filled the schedule for the first day of the Latah County Fair. Unlike last year, they were accompanied by other traditional fair staples such as food vendors, live entertainment and carnival rides.

In 2020, private livestock exhibits and auctions were the only activities allowed because of the COVID-19 pandemic.

Fair Director Jim Logan told the Daily News on Wednesday that organizers this year have taken a number of steps to minimize the risk to fair patrons such as reducing the number of vendors and their staffing requirement. They also added hand sanitizing stations around the fairgrounds.

Scarlet Donigian’s mother, Tiersa Donigian, watched as her daughter prepped Frank for his big day. She praised 4-H for teaching students like Scarlet how to be responsible for an animal.

“I love the excitement and what 4-H and FFA provides for the kids as far as the responsibility of getting their animals and training them and building relationships with them and learning what it’s like to have a commitment and to fulfill that,” she said.

Tiersa Donigian also shared her excitement for the fair, which she described as a celebration of the students’ hard work.

“It’s just fun for all the kids to come together as a community and watch each other show and cheer each other on and help each other and really kind of show what they learned for the year,” she said.

This was also Moscow Middle School student Owen Perry’s fourth year at the fair, but his first showing goats.The eighth-grader and 4-H member said he also shows rabbits and chickens.

He appeared confident while keeping an eye on his goat, Zeus, but he said taking care of him is not always easy.

“At the beginning it was a little bit challenging because they’re goats and they’re stubborn,” he said. “But as I’ve worked with them they’ve gotten easier and, of course, they have lots of personality.”

His parents said Owen had wanted a goat since he was 7. His mother, Kelly Owen, said they finally agreed to let their son have one after their neighbors approved having a farm animal in the neighborhood.

Owen also said his favorite part of the fair is showing off his animals. His father, Joel Perry, gets a kick out of coming to the fair and seeing all the competitors “interact and get to show off and share something that brings them so much joy, share that with others.”

The Latah County Fair continues through Sunday. It opens today at 10 a.m. and runs to 10 p.m.