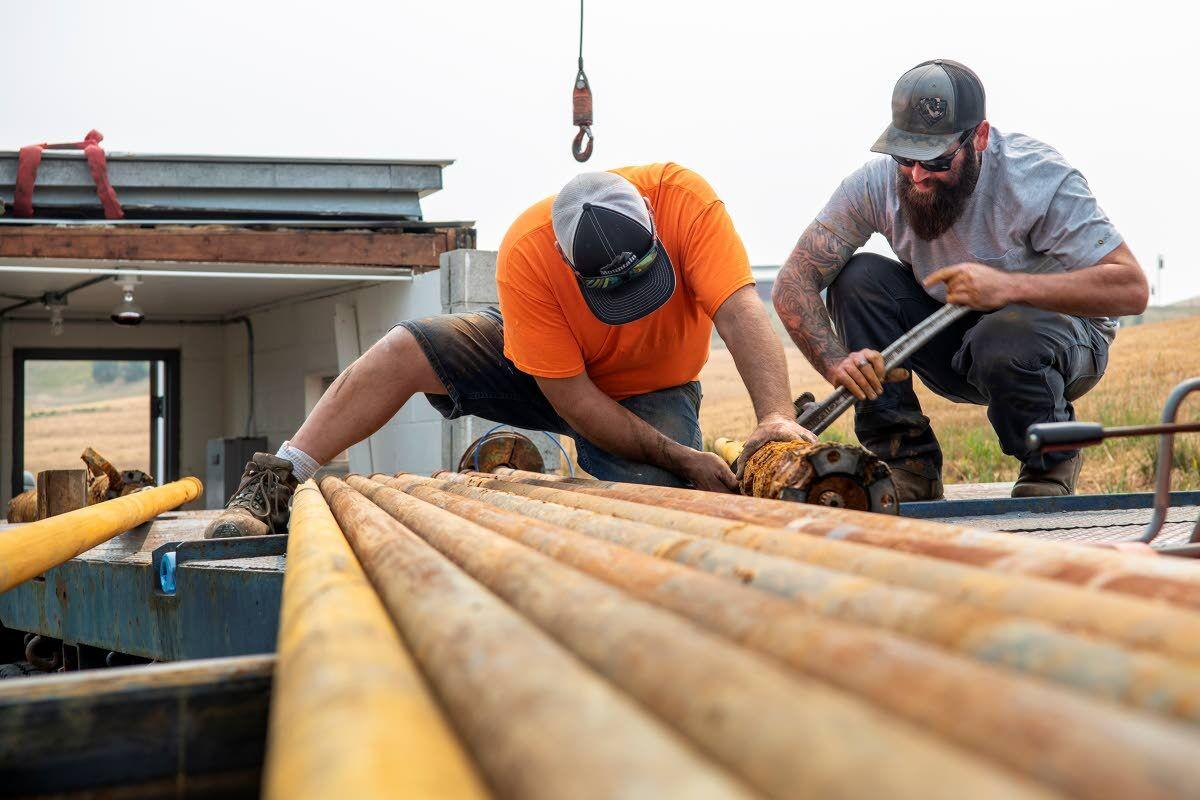 Troy’s maintenance supervisor, Danny Haskell, left, works with Mike Stradley of KME Specialties LLC to clean and inspect the Big Meadow Well pump in Troy on Tuesday afternoon after the city of Troy enacted emergency water restrictions because of a mechanical failure. 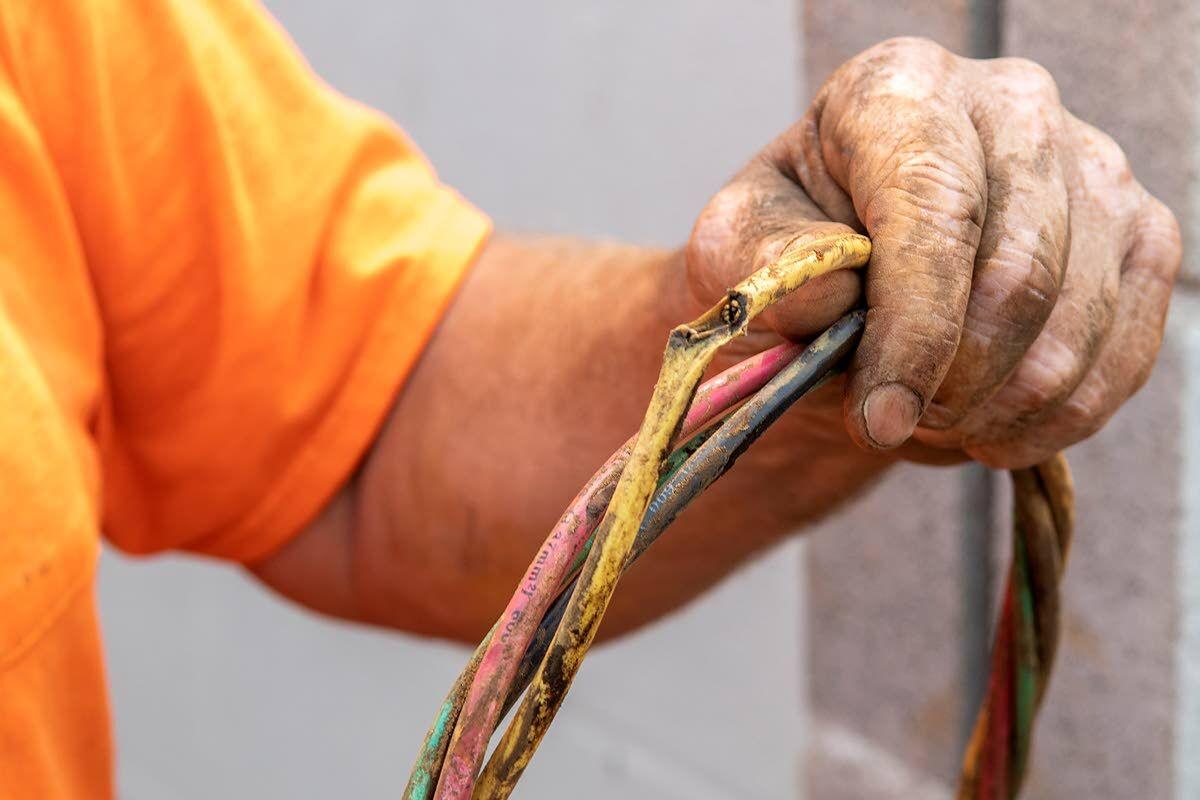 Haskell inspects a worn out pump cable from the Big Meadow Well in Troy. 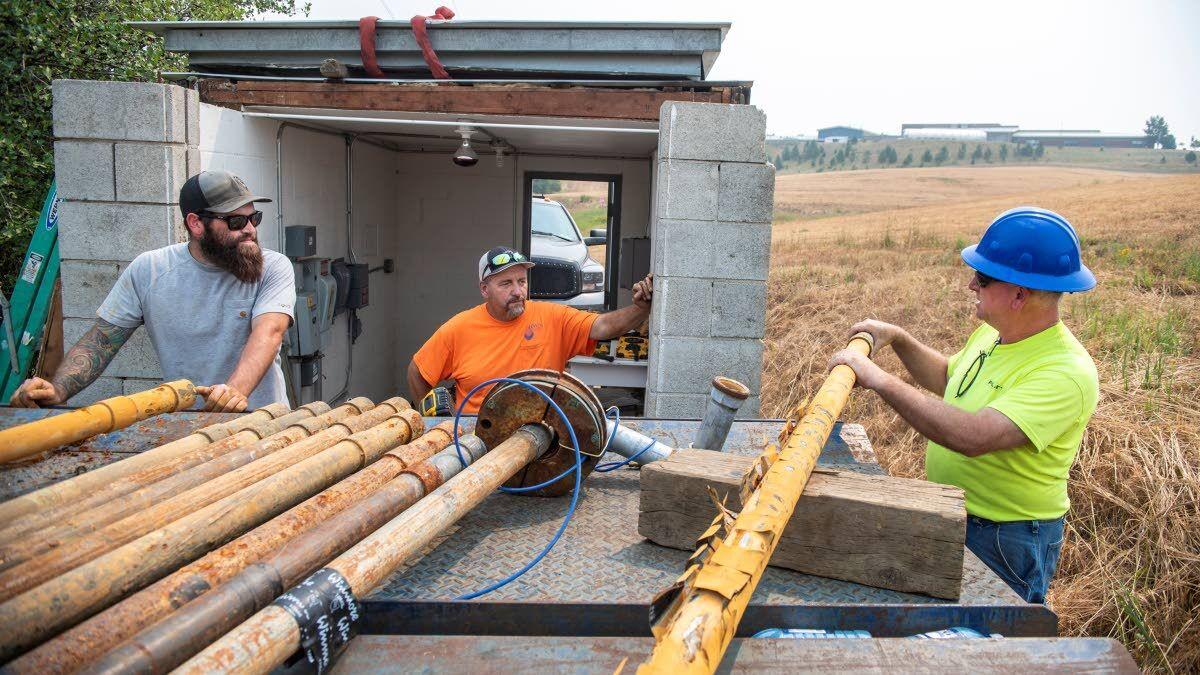 Troy’s maintenance supervisor, Danny Haskell, left, works with Mike Stradley of KME Specialties LLC to clean and inspect the Big Meadow Well pump in Troy on Tuesday afternoon after the city of Troy enacted emergency water restrictions because of a mechanical failure.

Haskell inspects a worn out pump cable from the Big Meadow Well in Troy.

The good news for Harvard is the town’s HooDoo Water and Sewer District is expected to receive some water and financial relief this week.

The pumping capacity of Harvard’s 105-foot-deep well has dropped significantly over the last month from 26 gallons per minute, then to 16 and now to 6 gallons. Michael Lucas, president of the district’s board, said 6 gallons per minute provides residents with about 6,000 gallons of water a day but people are using about 8,000 gallons.

“We’re pumping right now but it’s not enough to keep up with the demand,” Lucas said.

He said a water truck from Hayden, Idaho, is supposed to haul water today, and possibly in the future, from Deary to Harvard to help fill Harvard’s reservoir. If the reservoir is able to be filled, Lucas said that will provide several days’ worth of water for residents.

If the well stops producing water, he said the town would need to haul in water full time, which would add to the high costs the district is already facing. Lucas said the aquifer recharge rate is extremely slow and seems to be worsening.

Lucas said Monday — before he knew the district would be receiving water from Deary — that if the well’s production continued to drop, the town’s residents would be out of water this week.

A well service provider has been brought in to analyze the well and try to identify the reason for the well’s deficiency.

“The problem is the well’s 20 years old and was never a good well to start with,” Lucas said.

The district asked for $100,000 from Latah County to help pay for the costs it has and will incur. Lamar said the county funded the portion of the $100,000 that it believed the ARPA funds were eligible to cover.

“There are very strict requirements as to how the ARPA funds can be spent,” Lamar said.

Lucas said he is frustrated with the lack of financial support from the county and other agencies.

“They all promise all this help but none of it seems to be able to come through,” he said.

Lamar said the county has also communicated with the Idaho Department of Environmental Quality about funding the district’s needs and initiated communication with the Idaho Office of Emergency Management to pursue other emergency water options, such as those that could potentially be provided by the National Guard and the American Red Cross.

The county commissioners declared an emergency July 7 because of the water crisis. They extended the emergency July 14 and it is in effect indefinitely.

Lamar said the county has helped the district with water issues in the past and will probably be called to help in the future. Ultimately, it is the district’s responsibility to fix the problem, he said.

“It’s their responsibility,” Lamar said. “We can’t do everything.”

Lucas, who owns HooDoo Cafe in Harvard with his wife, said he is one of the concerned residents who relies on the well. There are also senior residents and families with young children who use the water from it.

“The health department has been real lenient with us but I’m afraid if this well fails, they’re going to tell us we got to shut down,” Lucas said. “So I mean, we’re looking at losing our business over this.”

In Troy, the city Tuesday placed emergency restrictions on outdoor water use and restricted the sale of bulk water after the city’s major well failed.

In a resolution adopted Monday, the City Council and mayor outlined the following restrictions until the city’s Big Meadow Well can be fixed:

Bulk water sales for commercial purposes are suspended until further notice. City Clerk/Treasurer Sabrina Moyer said an example of a bulk water sale is when the city sells abundant water to a lawn care company that needs it for its business.

The penalty for violating the emergency restriction on outdoor water usage will be a misdemeanor and punishable by a fine not to exceed $1,000, in accordance with Troy City Code Section 7-9-2.

According to a release from Mayor Steve Corr, the broken Big Meadow Well is the city’s major producing well. The reservoirs from the city’s second and third wells are low and are typically fed by the Big Meadow Well.

Since Big Meadow is offline, the reservoirs from the second and third wells are not being fed, resulting in a lower water supply, which can result in a lack of adequate water pressure, and could cause serious fire protection problems.