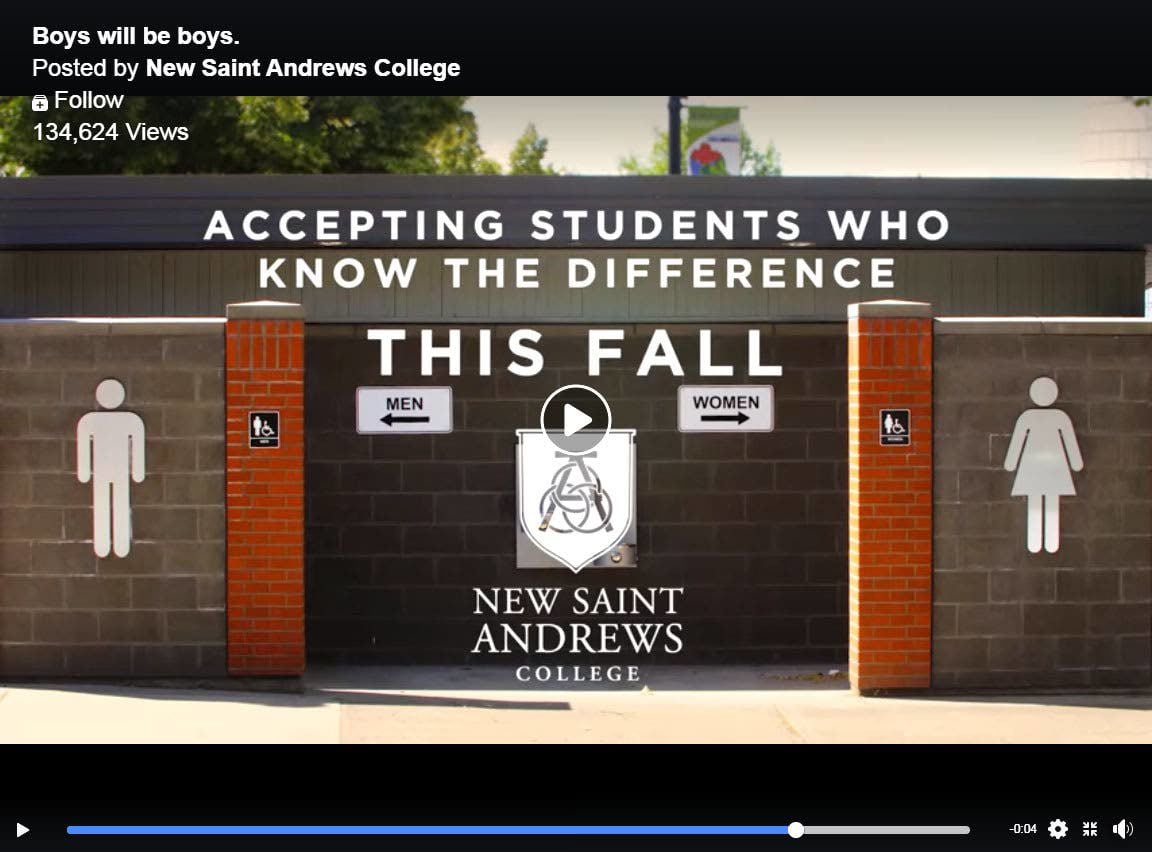 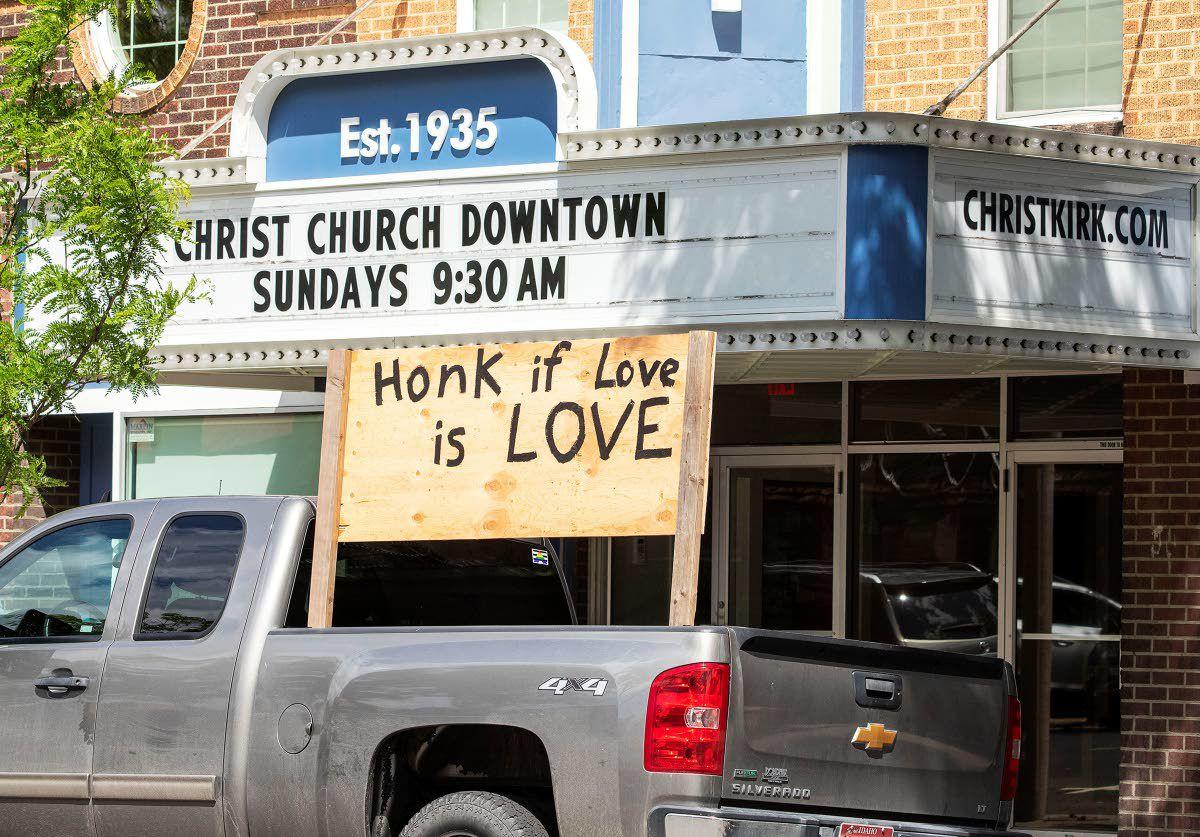 A sign reading “Honk if love is love” stands in the back of a pickup parked outside Christ Church on Tuesday on Main Street in Moscow. 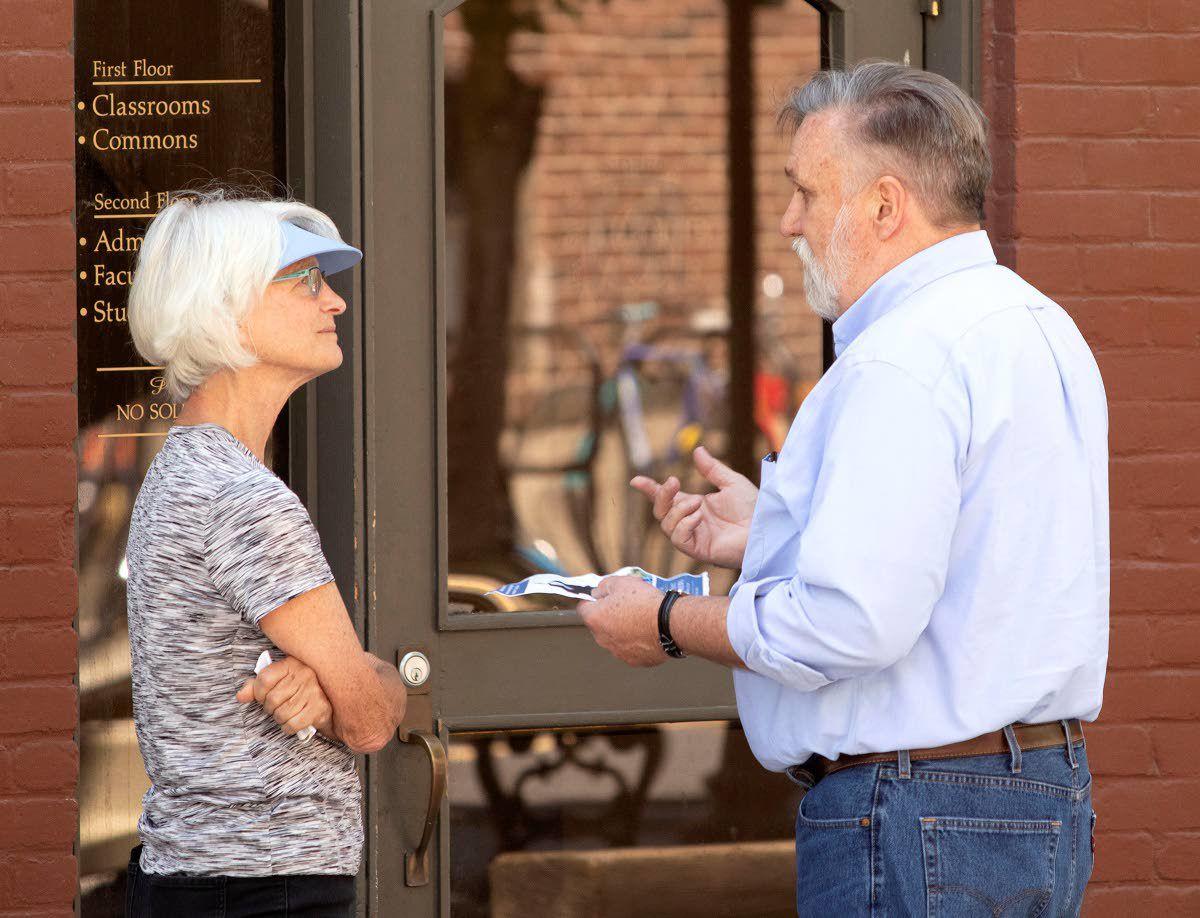 Theresa Beaver of Moscow talks to Moscow pastor Doug Wilson on Friday outside New Saint Andrews College in Moscow. Beaver was asking Wilson about a flyer which quoted him as saying, ""We know that sodomy is worse than slavery by how god responds to it."

A flyer posted in Moscow last week includes a quote Moscow Pastor Doug Wilson and the image of Wilson standing on a Pride flag. The flyers were not posted by NSA, according to Wilson and an NSA board member.

A sign reading “Honk if love is love” stands in the back of a pickup parked outside Christ Church on Tuesday on Main Street in Moscow.

Theresa Beaver of Moscow talks to Moscow pastor Doug Wilson on Friday outside New Saint Andrews College in Moscow. Beaver was asking Wilson about a flyer which quoted him as saying, ""We know that sodomy is worse than slavery by how god responds to it."

A flyer posted in Moscow last week includes a quote Moscow Pastor Doug Wilson and the image of Wilson standing on a Pride flag. The flyers were not posted by NSA, according to Wilson and an NSA board member.

A recruitment video posted online by Moscow’s New Saint Andrews College has garnered backlash on social media and prompted the city’s mayor to speak out against the content of the video, which he says “does not reflect the position of the city of Moscow, nor that of the mayor’s office.”

The video, captioned “Boys will be boys,” was posted to NSA’s Instagram and Facebook pages two weeks ago and to the Canon Press YouTube page this week.

The video features a man and woman walking into separate bathrooms marked by their respective genders. The doors close, a flush can be heard and the video finishes with a message: “We’re not science majors, but we know science even better than the Supreme Court. Accepting students who know the difference, in person, this fall.”

Founded in 1994 by members of Christ Church, NSA — a private, classical Christian college — is housed in the historic Skattaboe Block building on Main Street’s Friendship Square, near the public restrooms used in the video.

In a statement released June 26 and posted to the city’s Facebook page Tuesday, Lambert wrote that the message of intolerance projected in NSA’s advertisement does not align with the city of Moscow’s long history of acceptance and inclusivity and that the video “conveys a message of intolerance to anyone who does not fit traditional male-female gender identities.”

“I support other’s rights to their personal views,” Lambert wrote. “However, when those opinions run counter to our city’s long-standing policies to promote the fundamental rights of our citizens and acceptance and celebration of our cultural and social differences, I am compelled to speak out against those views. In this instance, I feel compelled to let our citizens and visitors know that NSA’s ‘Boys will be boys,’ recruitment message does not reflect the position of the city of Moscow, nor that of the mayor’s office.”

“As a conservative, Christian school, we’ve had the definition of gender in our statement of faith for some time now,” Merkle said. “Biology determines gender. That’s the traditional Christian orthodox position we stand behind and we want students who agree with that position.”

Community members and others disapproved of the video, some calling it “hateful” and “ignorant” in social media comments.

Moscow resident Jordan Hess parked his pickup in front of Christ Church Tuesday with a large sign in support of the LGBTQ+ community. The sign, propped up in the truck’s flatbed, read “Honk if love is love,” on one side and “Do you love Jesus more, or Doug Wilson?” on the other.

“I wanted (Christ Church) to see a response from someone who’s not a member of the LGBTQ+ community,” Hess said. “The world is a safe space for someone like me. I wanted them to see a white, heterosexual, cis-gendered male from Moscow respond to what they’re doing and standing in solidarity with this minority group.”

In a letter to Lambert also received by the Daily News, Moscow resident Laura Hannon called on the city to publicly denounce the advertisement’s implications.

“The video makes a strong statement and implies that members of the LGBTQ+ community are not welcome in our city’s public spaces,” Hannon said. “I understand NSA is a privately funded and owned organization, but the restroom featured in the video is a public entity.”

“For those who want a real education,” the post reads. “Free of masks, plastic wrap, zoom classes, government money, and ‘safe’ spaces.”

Toby Sumpter, a Christ Church pastor and board member at NSA, said he supports the recent ad campaign.

“We know the difference, and love the difference, between men and women,” Sumpter said. “We believe sin has invaded every area of life, including people’s understanding of sexuality. The gospel of Christ addresses that sin.”

This isn’t the first time Christ Church and its affiliates have elicited negative reaction from the LGBTQ+ community on the Palouse.

Founding member of NSA and Christ Church senior minister Douglas Wilson has given lectures on the University of Idaho campus with provocative titles, most recently “Toxic Matriarchy” and “The Lost Virtue of Sexism.” Wilson also co-wrote a pamphlet titled “Southern Slavery: As It Was.” The work gained attention for controversial statements, one of which said slavery in the South “produced a genuine affection between the races.”

And late last week, flyers featuring a picture of Wilson standing on a Pride flag were posted on a bulletin board at Friendship Square.

Wilson and Sumpter each said the flyers were not posted by NSA. Sumpter said he first heard about the flyers on Wednesday.

“I can confirm those flyers were not from NSA or Christ Church,” Sumpter said.

The photo on the flyer is above NSA’s logo and the words, “authorized and paid for by … ” which make the photo appear to be endorsed by NSA. At the top of the flyers is a quote from Wilson: “We know that sodomy is worse than slavery by how God responds to it.”

Wilson said the photo was taken a few years ago, as a declaration of defiance against the “pride agenda,” which he said would strip Christians of their freedoms. The quote was from a 2015 Q&A-style post on Wilson’s blog dealing with same-sex marriage, and how it was a far more serious problem than slavery.

Moscow’s Rebecca Rod and her wife, Theresa Beaver, said they were having breakfast outside Bloom on Friday when a friend brought the flyers to their attention.

“It hurts, you know, to see those flyers – like a dozen or so – plastered all over Friendship Square,” Rod said. “It hurts.”

The couple removed the flyers and spoke with Wilson that morning.

Wilson recounted the interaction in his latest “Blog & Mablog: Theology That Bites Back,” video, uploaded to the Canon Press YouTube account.

“This woman and her friend thought it really was an ad of ours, and did the Lord’s work by tearing them all down,” Wilson said. “They wanted to know why I was so focused on this issue. I basically said, ‘Our freedoms are at stake.’ As a minister, I’m going to maintain my liberty to declare what God’s word revealed to us about human sexuality.”

The current director of the LGBTQA Office at UI, Julia Keleher, took over for Rod in 2011.

“We are ranked the best campus in the state of Idaho for LGBTQA+ students this year, the second year in a row, through Best Campuses and Campus Pride,” Keleher said. “The University of Idaho welcomes all students of all identities and celebrates and supports their identities.”

Rod said the church she attends, Unitarian Universalist Church of the Palouse, has played a large role in her feeling confident and accepted.

“We’re very at odds with what Doug Wilson’s church represents, because we really are a welcoming and open place,” Rod said. “(The Unitarian church) gave me the ability to feel like I could be who I was.”

Ken Faunce, chair of the Moscow Human Rights Commission, called the photo and quote on the flyers “disgusting.”

“Moscow is an inclusive community and we’re proud of that fact,” Faunce said. “We keep trying to make that as true as possible.”

In 2013, Moscow City Council unanimously passed an anti-discrimination ordinance. The law made it illegal to discriminate based on sexual orientation and gender identity in housing and employment practices.

“(The flyers) are going to be positive and welcoming,” Faunce said. “We’re going to put them around in various locations and in the doors of businesses who have been extra welcoming.”

Going Against the Flow Since 1994: New Saint Andrews College