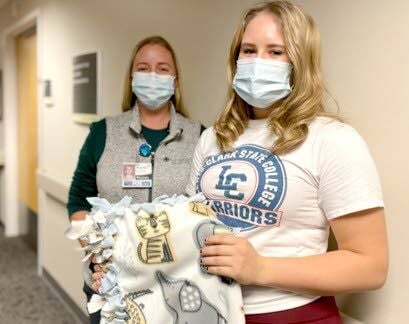 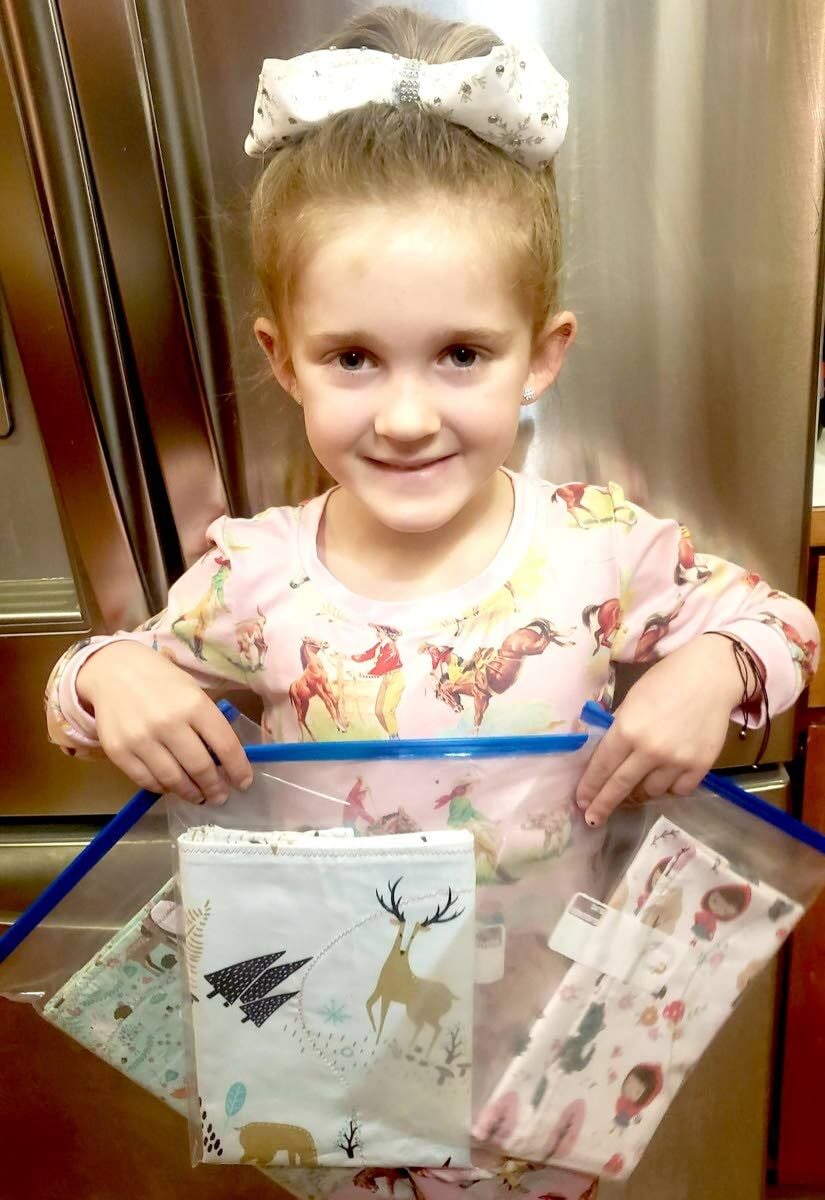 Aspen Johnston, 6, helped her mother make a handful of blankets for sick children at Pullman Regional Hospital. Aspen used money she earned selling her homemade air fresheners to buy materials for the blankets.

Aspen Johnston, 6, helped her mother make a handful of blankets for sick children at Pullman Regional Hospital. Aspen used money she earned selling her homemade air fresheners to buy materials for the blankets.

A Troy High School senior and a 6-year-old Deary girl took it upon themselves to bring a little extra comfort to hospital patients on the Palouse this winter.

Betty McKenzie, the Troy student, is a volunteer at Gritman Medical Center who decided to make blankets for newborns at the Moscow hospital’s Family Birth Center. Aspen Johnston, the 6-year-old, helped her mother make blankets for sick children at Pullman Regional Hospital.

Neither of them were asked to do this, but each one knew that this small gesture can have a positive effect on a patient’s hospital experience.

After asking her mom if there were any sick children at Pullman Regional Hospital, Aspen said she wanted to make them blankets so they would not feel scared.

“I started crying,” Dustene Johnston said. “It was just so sweet.”

Aspen, who enjoys making crafts, used the money she earned selling her homemade air fresheners to buy materials for the blankets. Dustene Johnston sewed the blankets together.

“I just love how caring she is and once she has her mind set, she’s going to figure it out,” Dustene Johnston said. “She’s going to do it.”

Aspen said they made five blankets.

“At the end, they were really pretty and I really liked them,” Aspen said.

Nikki Nolt, the hospital’s volunteer coordinator, said these blankets make the hospital feel cozier and less frightening for patients. Plus, the patient’s family can keep the blanket if they choose.

Nolt said the hospital staff are concerned about their patients 24/7, so these types of kind gestures also boosts their morale, too.

McKenzie signed up to volunteer at the hospital last year because she wants to become a neonatal nurse practitioner.

“Any way that I can work closely with the hospital and get involved in that environment is exciting to me,” she said.

She could not work directly with the mothers because of COVID-19 precautions, so her duties included filing paperwork, refilling tissue boxes and making baby hats.

McKenzie wanted to do more for the parents, though. So, she and her mother bought materials and learned how to make blankets for the newborns.

Having never made a blanket before, McKenzie said she “got the hang of it pretty quickly” and made eight blankets for girls and eight for boys. She said it took her 15-20 hours to make all of them.

She said newborns are typically given a standard issue hospital blanket and hat when they’re born, but she wanted to give them a handmade “nice quality blanket” that the mother can keep for years. McKenzie still has the baby blanket that comforted her when she was born.

McKenzie said she was also motivated to help out the staff at the Family Birth Center. She said the nurses were grateful for her hard work.

“I think that it’s important to contribute to them because they are bringing new life into the world,” she said.

Gritman CEO Kara Besst wrote in an email that the new arrivals at the Family Birth Center are the “highlight of any day at Gritman.” She called McKenzie a great addition to the hospital.

“We are so grateful to have her be a part of our nonprofit mission,” she wrote. “And the blankets she made are as cute as the babies.”

McKenzie credited Gritman’s Volunteer Coordinator Kim Malm for guiding her during her time at the hospital. McKenzie hopes to continue volunteering there and is one step closer to her career goal. She has been accepted into the Lewis-Clark State College nursing program.