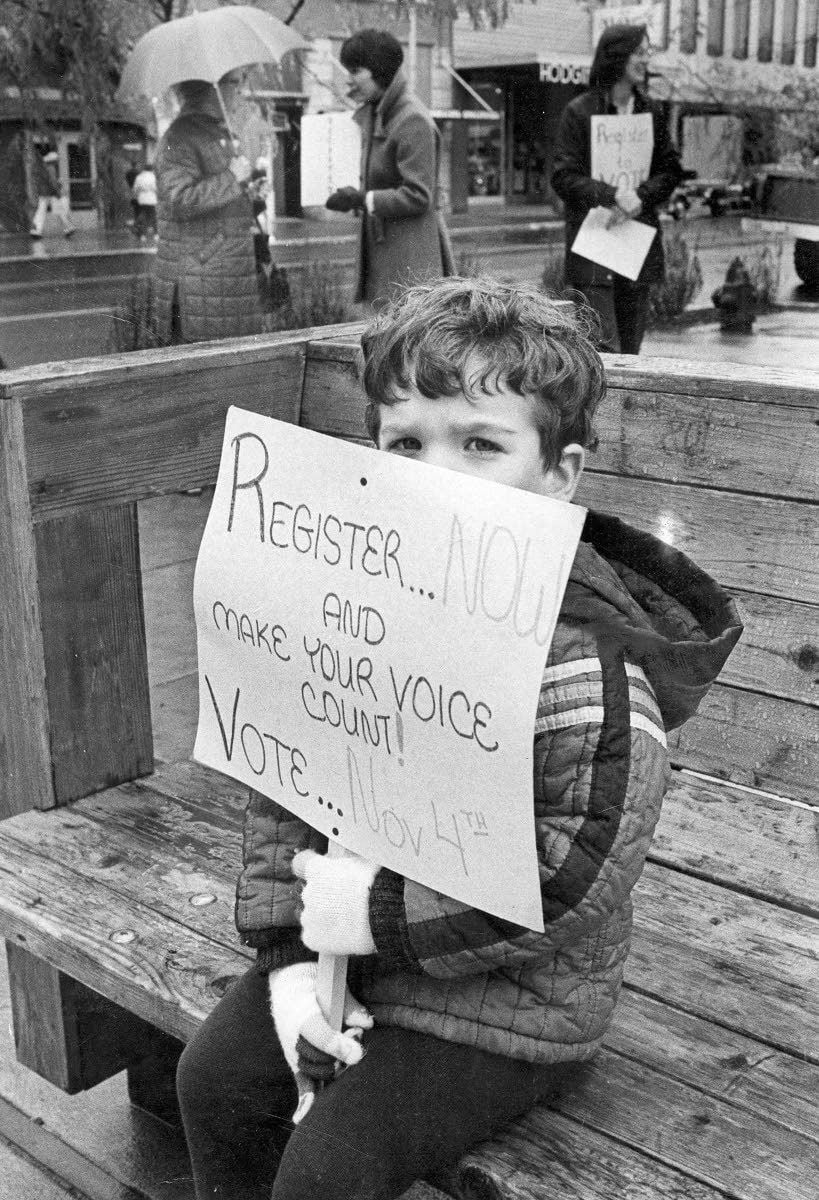 A boy holds a sign during a voter-registration event hosted by the League of Women Voters in 1970 in Moscow. 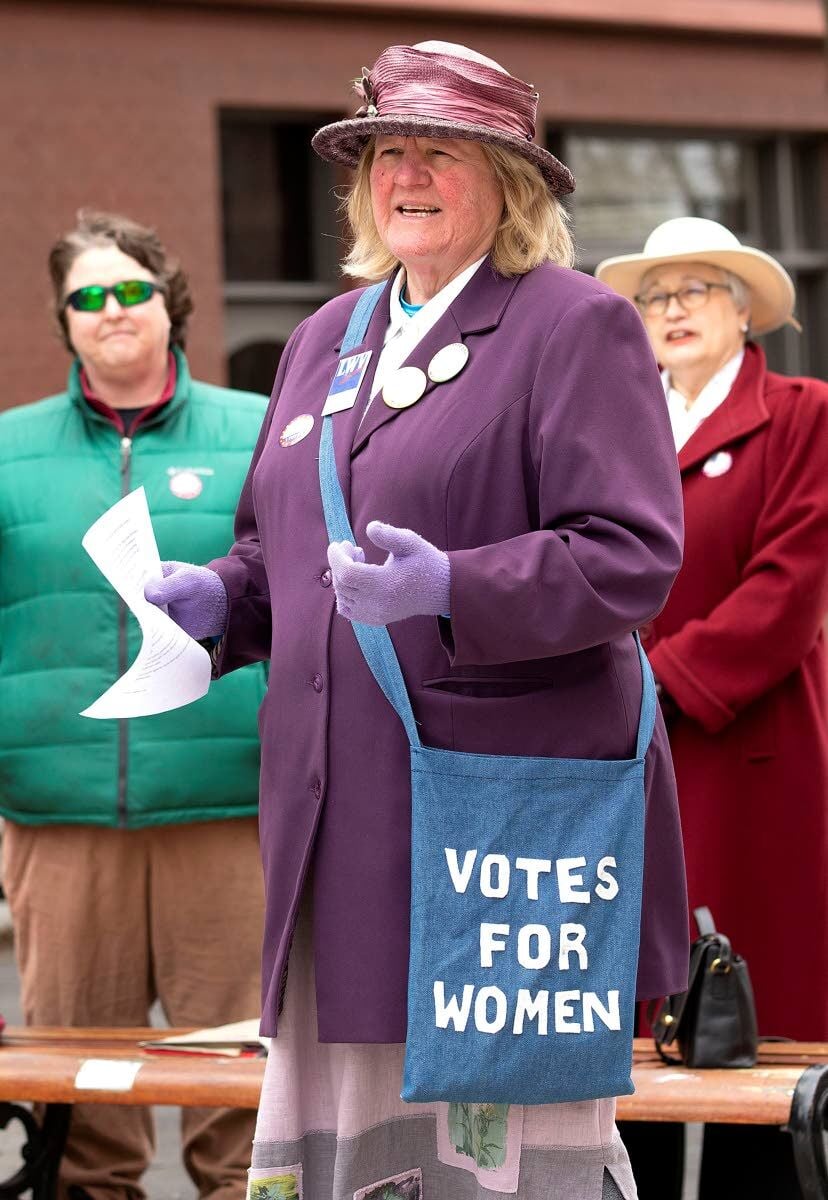 Susan Ripley, president of League of Women Voters of Idaho (center), speaks while Idaho City Council member Sandra Kelly, left, and Latah County Clerk Henrianne Westberg listen during a rally to recognize the centennial of the 19th Amendment on March 13 at Friendship Square in Moscow. 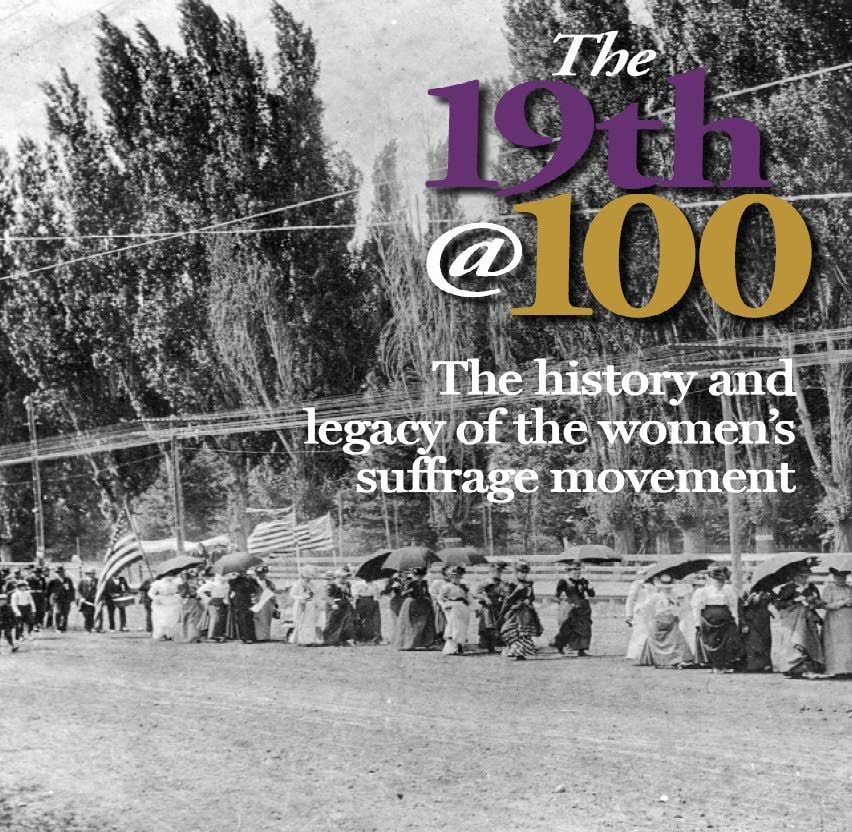 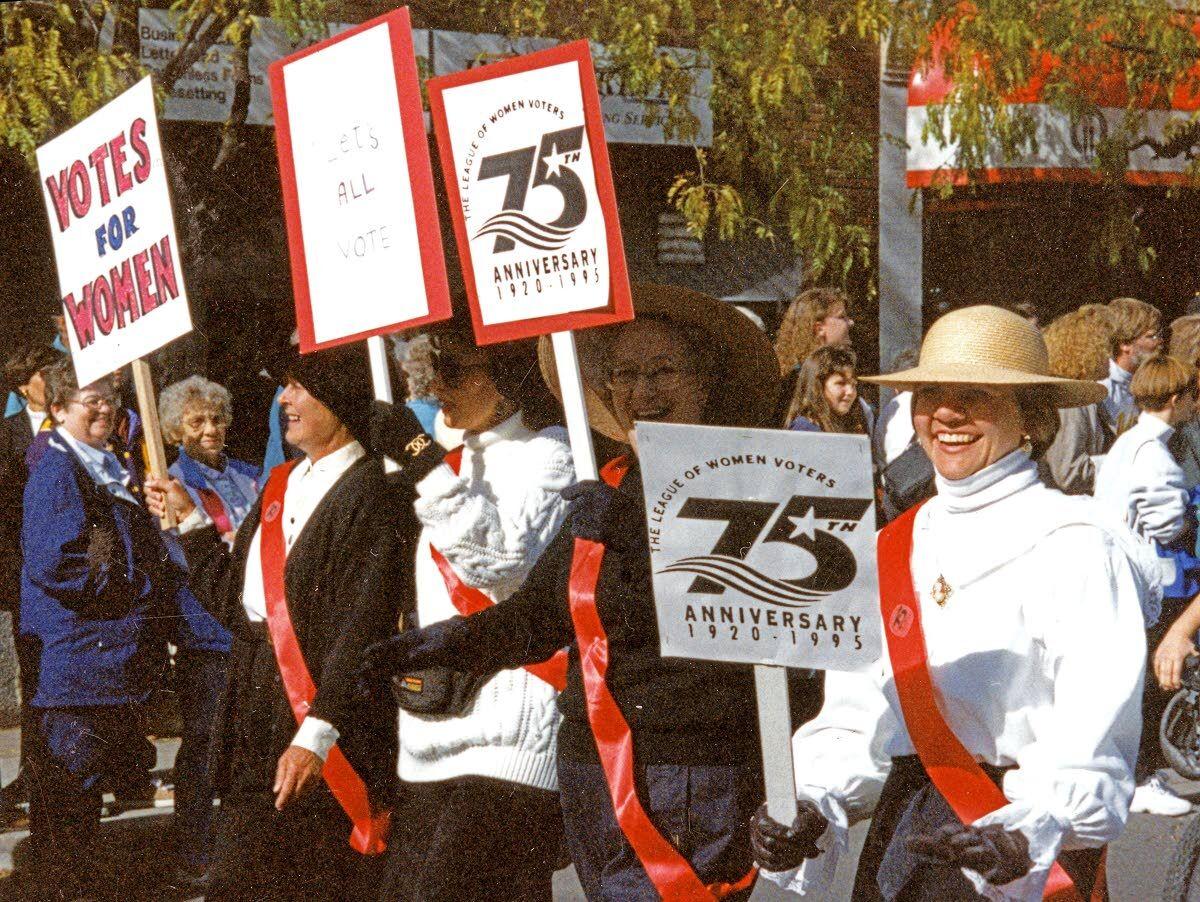 Marchers celebrate the 75th anniversary of the League of Women Voters in 1995 during the University of Idaho homecoming parade in Moscow.

A boy holds a sign during a voter-registration event hosted by the League of Women Voters in 1970 in Moscow.

Susan Ripley, president of League of Women Voters of Idaho (center), speaks while Idaho City Council member Sandra Kelly, left, and Latah County Clerk Henrianne Westberg listen during a rally to recognize the centennial of the 19th Amendment on March 13 at Friendship Square in Moscow.

Marchers celebrate the 75th anniversary of the League of Women Voters in 1995 during the University of Idaho homecoming parade in Moscow.

Along with the centennial birthday of the 19th Amendment — which gave women in the Unites States the right to vote — this year marks the 100th anniversary of an organization dedicated to voter education: the League of Women Voters.

There are nearly 250 members of the Idaho League of Women Voters, and more than half of them — including the nonprofit’s statewide president — are part of the Moscow chapter.

Susan Ripley, a longtime Moscow resident, has been president of Idaho’s state league for three years and a league member since 2010.

“When you get around a group of league men and women, you know that you are among informed, intelligent and fun people to have conversations with,” she said. “They really know what’s going on.”

Ripley said the LWV was created soon after the 19th Amendment’s ratification to make sure social change came next.

“When women were given the right to vote nationally, they weren’t running to the polls,” she said. “The league was formed to encourage women to participate in government, register to vote and get educated on candidates and issues.”

Fast forward 100 years, and LWV’s mission is largely the same. More than 800 local and state leagues around the country are full of women and men who work to make sure people have their voices heard, regardless of political affiliation.

The political organization is entirely nonpartisan, but it does support various political policies including universal health care reform and the continuation of the Development, Relief, and Education for Alien Minors (DREAM) Act.

Ripley said she believes the local LWV is special because of the community role it’s adopted..

Established in 1952, the Moscow LWV chapter has worked to educate the public and conduct locally-driven sociopolitical research and advocacy.

One such project Ripley is proud of is the league’s mock election program for Moscow High School and other area schools.

The mock elections are scheduled in tandem with many local, state and national elections in order to educate high school students about the voting process. Ripley said the LWV counts the ballots and shares mock election results with the community.

“It’s a pretty big deal — people are really interested in how our high school students are voting,” she said.

One of the biggest challenges democracy faces — both locally and nationally — is what it looks like to function during the COVID-19 pandemic.

“Getting people to the polls, getting people absentee ballots, I think that’s our biggest concern right now,” she said. “There seems to be instances throughout the country that have been called voter suppression. What the league wants is for everybody to be able to get a ballot and have that ballot counted.”

Ripley said Idaho voters have it lucky because anybody can request a mail-in absentee ballot, an option that doesn’t exist in every state. She said she hopes this ability encourages people in the state to vote in the upcoming election and to stay informed about state and local candidates because they adopt close-to-home policies.

“If somebody is interested in promoting active involvement in government and voter education, then I would say join the League of Women Voters,” she said. “It’s been around for 100 years. They must be doing something right.”

Ellen Dennis is the news clerk at the Moscow-Pullman Daily News. She can be reached at (208) 883-4632 or by email at briefs@dnews.com.

The Daily News on Tuesday will publish a special pullout section, “The 19th @ 100: The history and legacy of the women’s suffrage movement.” Tuesday marks the 100th anniversary of the ratification of the 19th Amendment to the U.S. Constitution, which prohibited states and the federal government from denying the right to vote to citizens of the United States on the basis of sex.