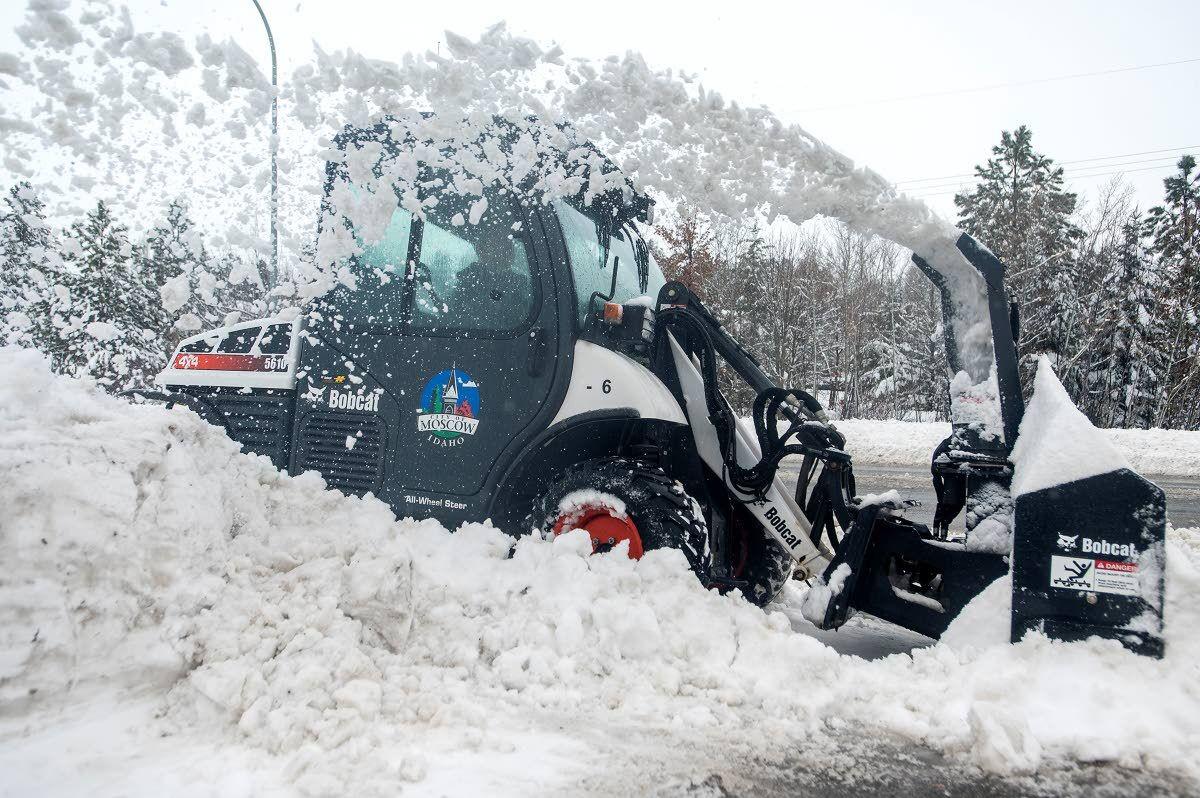 Roy Bremenour clears snow from the sidewalk along State Highway 8 on Thursday afternoon in Moscow.

Roy Bremenour clears snow from the sidewalk along State Highway 8 on Thursday afternoon in Moscow.

When heavy snow hits, some school districts are now opting for remote learning rather than the traditional snow day.

But that doesn’t mean snow days are a thing of the past, according to St. John Endicott School District Superintendent Suzanne Schmick. This week, her schools took a different approach to the inclement weather than others in the region.

“Over the years, we’ve done the late start and snow days,” Schmick said. “This year, after working with our education office here in the state of Washington — who asked us to be prepared through COVID-19 protocols to have an online presence — we have kept those tools and skills active, even during the regular school day.”

On Monday and Thursday, schools in the St. John Endicott School District switched to online learning because of the forecast.

Schmick said the school district is trying to reserve snow days for something more catastrophic, like the loss of internet or power in school buildings. Since the start of the COVID-19 pandemic, its schools have expanded online opportunities and issued Chromebooks to every student from preschool through 12th grade.

“Prior to that, we didn’t have a lot of options,” she said. “Snow days might still happen in St. John and Endicott, but we’re trying to reserve them for when we just can’t come in, period.”

She added that the state of Washington requires schools to provide students with learning opportunities for 180 days out of the year. It’s always a priority to be face-to-face, Schmick says, but online learning allows them to be more flexible when challenges arise.

“If we went to all snow days, we’d end up having to make those days up in June or wherever else you can fit them into the calendar, which becomes a bit limited,” she said.

The Palouse received 5-8 inches of snow Thursday, and many schools — including those within the Moscow School District, Pullman School District and more than a dozen others in the area — gave students the day off.

Before a decision was made, Moscow School District Superintendent Greg Bailey and Transportation Supervisor Greg Harris were up around 4 a.m., monitoring the road conditions and communicating with city and county cleanup crews.

“The thing is, we’re making decisions and predictions while it’s still dark outside,” he said. “By no later than 5:30 a.m., we make a decision. I have a mass communication I send out to all our staff.”

After that time, buses would be scheduled to begin picking up students. A half hour later, the school district sent a message to parents notifying them of the closure.

Courtney Hodge, administrative assistant to the superintendent at the Pullman School District, said the executive director of operations at the school district, Joe Thornton, is often the person checking the roads during the early hours when a winter storm arrives.

“He is frequently the one driving around at four o’clock in the morning figuring out what we’re going to do,” she said.

Bailey says his schools have a 90% attendance rule, which means a kid can miss nine days of school in one semester and still get credit.

“It’s the day that, if a family lives out of town or really is stuck, they can choose to stay home,” he said. “I send out a letter to parents each year beforehand and one of the things I emphasize is, I make the decision to open the schools but it is their decision to send their kid. We’re just trying to find the best way to keep their kids safe.”

Rather than cancel classes altogether, a few school districts in the region opted for a late start.

The Garfield-Palouse School District delayed opening for two hours on Wednesday, Thursday and Friday because of the snow.

Palermo can be reached at apalermo@ dnews.com or on Twitter @apalermotweets.