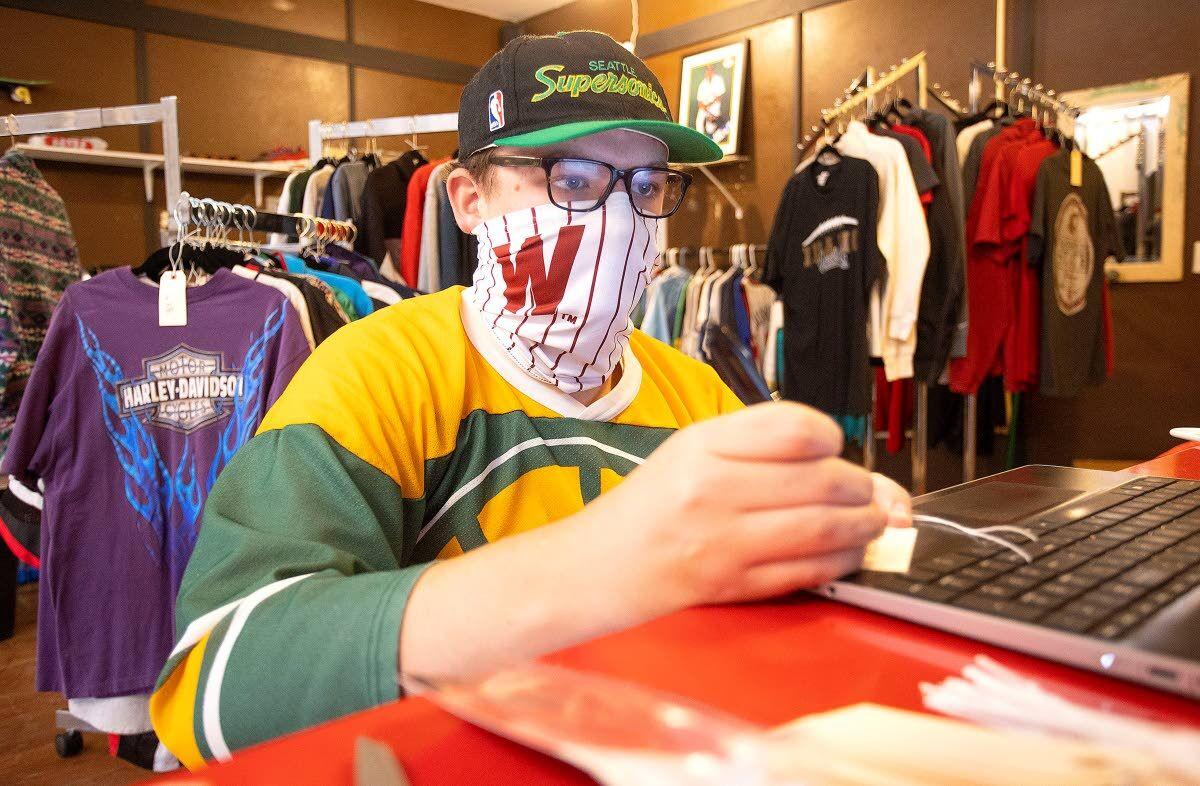 Dante Ludlow tags clothing Monday at Dante’s Deals on Main Street in Pullman. The business sells vintage clothing, sportswear and shoes, both at the Pullman shop and on eBay. 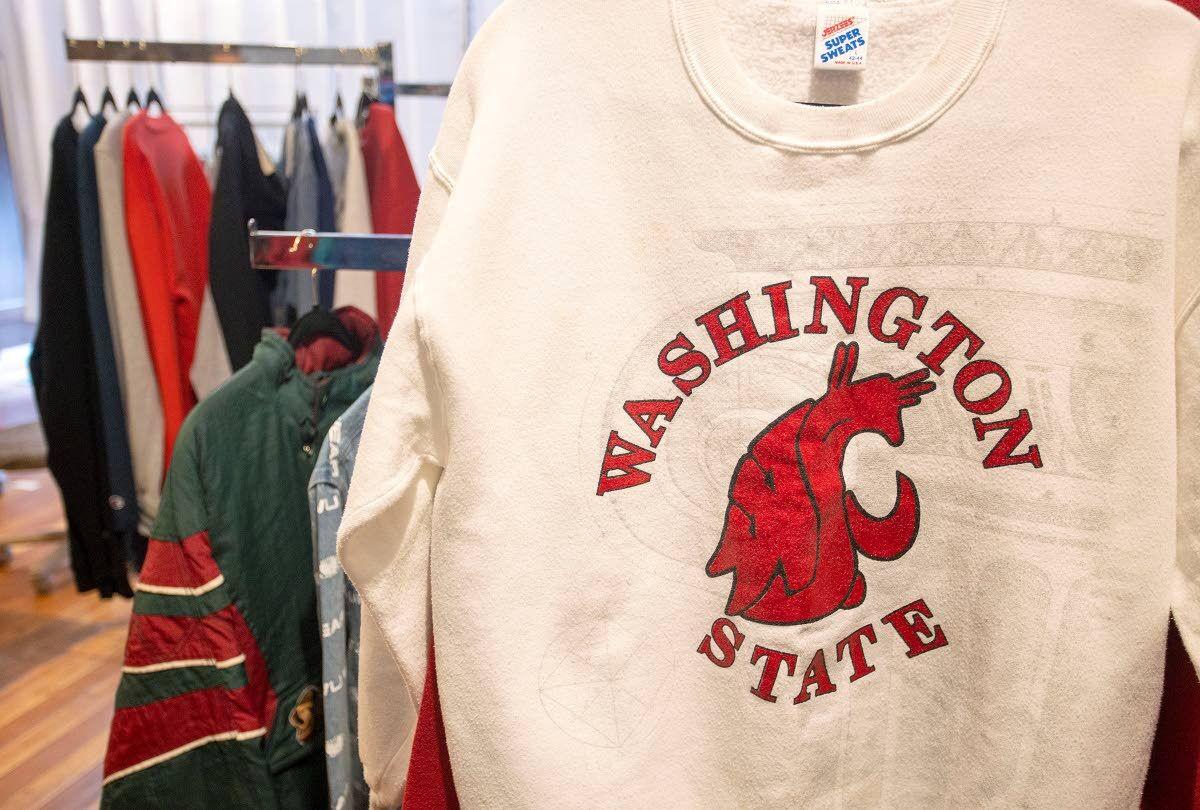 Dante’s Deals sells vintage clothing, sportswear and shoes, both at the Pullman shop and on eBay. 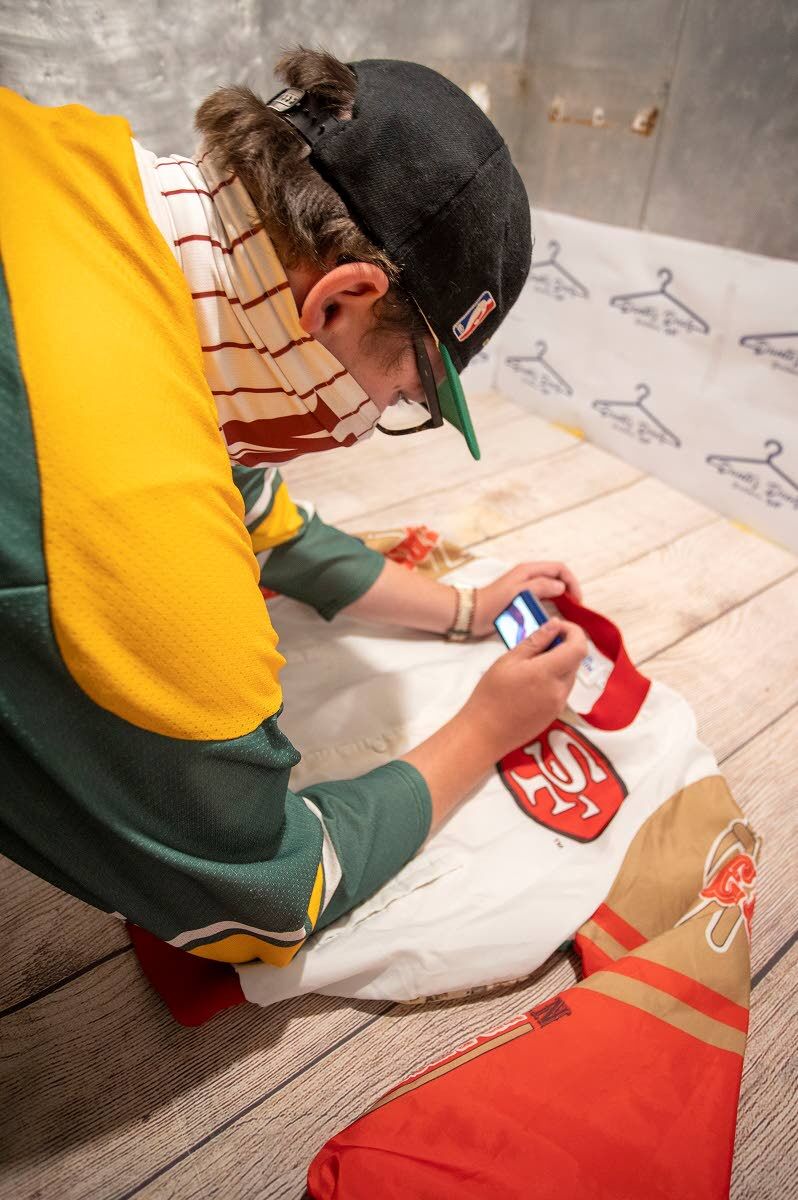 Dante Ludlow photographs a vintage San Francisco 49ers jacket for his E-Bay shop on Monday at Dante's Deals on Main Street in Pullman.

Dante Ludlow tags clothing Monday at Dante’s Deals on Main Street in Pullman. The business sells vintage clothing, sportswear and shoes, both at the Pullman shop and on eBay.

Dante’s Deals sells vintage clothing, sportswear and shoes, both at the Pullman shop and on eBay.

Dante Ludlow photographs a vintage San Francisco 49ers jacket for his E-Bay shop on Monday at Dante's Deals on Main Street in Pullman.

Since his arrival at Washington State University as a freshman, the owner of vintage clothing store Dante’s Deal’s has poured whatever spare time he had into growing his business.

Between majoring in sport management at WSU, working for the university’s athletic department and refereeing three high school sports, Dante Ludlow still found the time to take a lucrative hobby and transform it into an online and brick-and-mortar store located in Pullman.

“This is what all of my free time goes to, but I love it,” the self-described workaholic said. “I wouldn’t change anything.”

Dante’s Deals will have a grand opening 3-8 p.m. Friday at its storefront on 226 E. Main St. Customers will be able to see first-hand Ludlow’s collection of sportswear, shoes, athletic apparel and other clothing.

Passersby likely noticed the varied and colorful vintage shoes, jerseys and other items on display in the storefront’s window since this summer.

Ludlow said he took over the space in July to store items for his online retail store, but did not intend on opening up the storefront to the public.

That changed after hearing interest from others.

“We set up that window display and everyone started asking, ‘Oh, when are you guys going to open up?’ ” he said.

Ludlow still primarily sells his items on eBay, but now customers will be able to visit the store in person most Fridays during the year.

Ludlow said he will rotate new items into the sales floor every week.

“Hopefully, we kind of create more of an event than just a regular retail shopping experience,” he said. “We don’t want it to ever get old. We want people to come back and be excited to see what we’ve got that week.”

He has hired some of his friends part-time to staff Dante’s Deals. Ludlow plans to continue working toward a career in baseball analytics in Major League Baseball, so he hopes to reach a point where he does not have to be at the store every day to run daily operations.

He loves the community, however, and wants the store to be a hit with the local college students.

“I love being a Coug,” he said. “I love hiring Cougs. I love helping Cougs. I think it’s a great market for what I’m selling. It’s a great place to keep the online sales going and I’m excited to see where it’ll go and how I can balance it with working in baseball, because I want to do both.”

The Kirkland, Wash., native’s journey to this point started with a pair of sneakers. Back in 2013, Ludlow bought a pair of Air Jordans at a thrift store for $20 and planned to sell the shoes to his friends.

They were not interested, so his mom showed him how to sell the shoes on eBay. To his surprise, a man from New Zealand shelled out $150 for the pair.

Ludlow used the cash to buy more shoes from Goodwill that he could flip for a profit. That cycle continued when he started college in Pullman. Ludlow rented a storage unit to hold his inventory and listed the items on eBay from his dorm room.

Since that time, Ludlow has developed an eye for finding trending items that he can restore and sell to the public. He shops at thrift stores and buys items in bulk from other vintage enthusiasts from across the country.

Ludlow said he enjoys restoring sneakers or shirts and making them desirable for someone else.

“To me that’s really rewarding because it’s like somebody was ready to throw that item away and I was able to turn it back into something that somebody else would want and find a home for it,” he said.