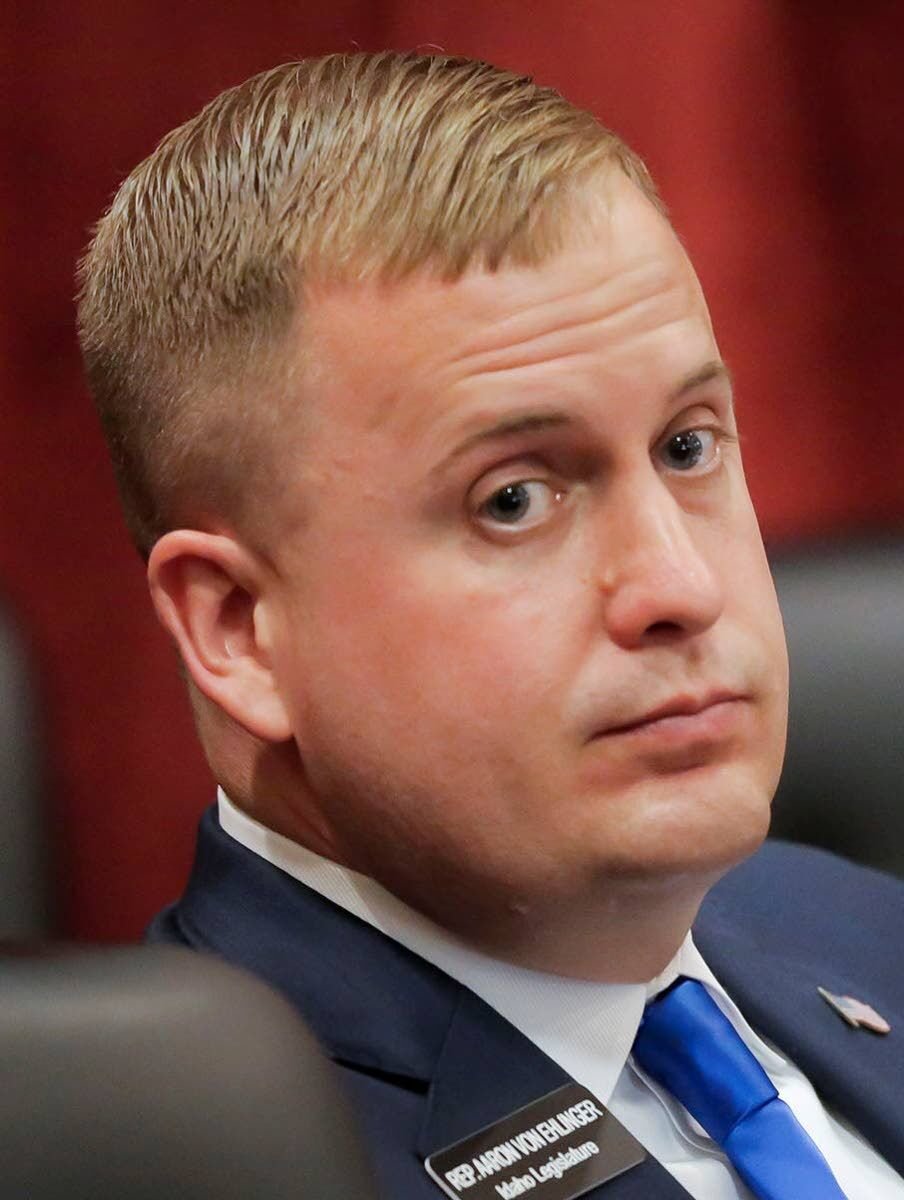 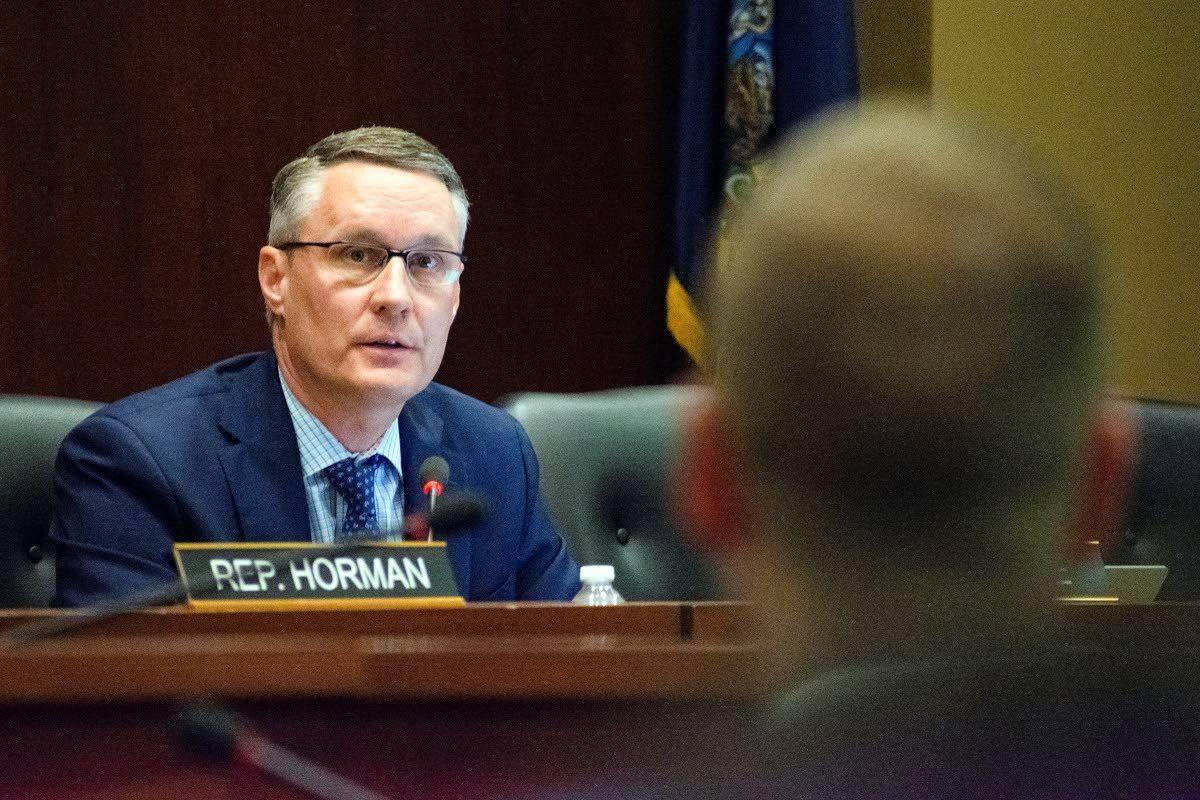 Rep. Brent Crane, R-Nampa, looks at Rep. Aaron von Ehlinger, R-Lewiston, while accusing him of lying to the House Ethics Committee during the second day of a hearing Thursday in Boise. The committee recommended von Ehlinger be censured and suspended, after which the Lewiston Republican resigned.

Rep. Brent Crane, R-Nampa, looks at Rep. Aaron von Ehlinger, R-Lewiston, while accusing him of lying to the House Ethics Committee during the second day of a hearing Thursday in Boise. The committee recommended von Ehlinger be censured and suspended, after which the Lewiston Republican resigned.

BOISE — Lewiston Rep. Aaron von Ehlinger resigned his seat Thursday, shortly after the House Ethics Committee recommended that he be censured and suspended for conduct unbecoming an Idaho state representative.

The move reflects a meteoric downfall for the first-term Republican, a former Army airborne infantry soldier who was appointed to office 11 months ago.

In his resignation letter, von Ehlinger wished his constituents and colleagues the best.

“After careful deliberation and prayer, I have determined that I will not be able to continue to effectively represent my constituents in the Idaho House of Representatives, and have decided to resign my seat effective immediately,” he wrote. “It is my hope that this action spares my good colleagues any more difficulty in this area.”

Von Ehlinger was extremely active during this, his first legislative session. He sponsored or co-sponsored at least eight bills and resolutions and had an amiable relationship with lawmakers in both chambers.

That positive start came under a cloud in mid-March, however, when House Republican leaders filed an ethics complaint against him after a 19-year-old House intern accused him of rape.

As per House rules, the complaint remained confidential for nearly a month, until the House Ethics Committee completed a preliminary investigation. Once it decided there was sufficient probable cause to move forward, the complaint became public April 16.

That led to a nearly six-hour Ethics Committee hearing Wednesday, in which von Ehlinger and his accuser both testified.

The intern, identified only as “Jane Doe,” testified from behind a blackened screen to protect her identify.

Gov. Brad Little and House Speaker Scott Bedke, R-Oakley, both praised her for her willingness to come forward.

“I applaud Jane Doe and the other brave women for their courage in telling their stories and participating in this process to hold Rep. Aaron von Ehlinger accountable for his deeply damaging and shameful actions,” Little said, shortly after the committee issued its recommendation.

In a statement issued after von Ehlinger resigned, Bedke thanked the intern “for her incredible courage and determination in testifying in front of (the committee). Every member of the House of Representatives is not only expected, but required to perform their duties with the highest levels of integrity and dignity. Former Rep. Aaron von Ehlinger was found by the Ethics Committee to fall far short of that requirement.”

The rape allegation, which von Ehlinger has denied, is being investigated by the Boise Police Department. Although it served as an unavoidable backdrop for Thursday’s Ethics Committee meeting, the focus was squarely on behavior von Ehlinger acknowledged.

“The facts here are incontrovertible,” said Boise Rep. John McCrostie, one of two Democrats on the five-member committee. “The representative engaged in a sexual relationship with a student intern. The criminal court can determine if rape occurred, but I have no doubt the relationship was inappropriate.”

During Wednesday’s public hearing, Boise attorney Edward Dindinger noted that the House has no written policies or rules that prohibit members from dating legislative staff, nor did the body ever formally adopt the Respectful Workplace policy, which von Ehlinger allegedly violated.

McCrostie and other committee members were unpersuaded by that line of reasoning.

“Common sense and basic morality dictate that an elected representative shouldn’t entertain a relationship with a student intern,” McCrostie said.

He noted that von Ehlinger ignored repeated warnings about his behavior.

“In his short tenure in the Idaho Legislature, he was counseled twice (by another representative) on monitoring his conduct,” McCrostie said. “And over the course of two months, he attended two training sessions on the Respectful Workplace policy. Yet in that same time, he pursued four different women with ties to the Idaho House. This pattern of behavior — not only ignoring counsel on appropriate boundaries, but pursuing sexual relationships in the House — creates an unsafe work environment for any woman the representative may be interested in dating.”

Ethics Committee Chairman Sage Dixon, R-Ponderay, may have spoken for the entire House when he emphasized the responsibilities that come with elected office.

Rep. Brent Crane, R-Nampa, cited several inconsistencies in von Ehlinger’s testimony, including voice and text messages asking the intern for a “second chance,” despite telling the committee he’d decided not to go out with her again after their first sexual encounter.

“He told the committee he had no intention of dating this person again, that this would be an isolated event,” Crane said. “Yet we have evidence to the contrary. In my view, that was a lie.”

Like others on the committee, Crane indicated his vote was to uphold the integrity of the institution.

“The Idaho House of Representatives existed long before we arrived and will be here long after we leave, but history will judge us by our actions today,” he said. “I want our actions to provide a clear directive to current and future members that this body expects members of the Idaho House to serve constituents in the highest ethical and moral manner.”

The committee voted unanimously not only to censure von Ehlinger, but to suspend him without pay for the remainder of his term in office, until after the 2022 general election.

The committee indicated it would also support a motion to expel von Ehlinger from the House, should one be introduced.

In his resignation letter, von Ehlinger noted that the committee’s decision amounted to “an expulsion in all but name.”

“I maintain my innocence of any wrong-doing of which I have been accused in this matter, let alone any violation of any law, rule or policy of the state of Idaho or of this body,” he wrote. “I wish my constituents, colleagues and the body all the best. It has been an honor to serve.”

Per state law, legislative vacancies are filled by gubernatorial appointment. The 6th Legislative District Republican Central Committee will have 15 days to submit the names of three potential replacements to the governor. He’ll pick one to fill the seat until after the 2022 general election.

“I think he came to the right conclusion,” Kingsley said. “This is what needed to happen. I’ve heard quite a bit about it (from constituents) on both sides. It was pretty evenly split. Some defended him and some said, ‘Throw the bum out.’”

House and Senate rules indicate ethics complaints can only be filed against a lawmaker by other members of the body.

Given that the complaints remain confidential unless and until the ethics committee finds probable cause, it’s rare for a complaint to reach the point of a public hearing.

Legislative Library staff say it’s only happened a handful of times in the past 20 years, and in most cases the committee voted to dismiss the complaint.

The one exception was in 2005, when the Senate Ethics Committee unanimously recommended that Sen. Jack Noble, R-Kuna, be censured for failing to declare a conflict of interest and lying to the committee.

As is the case with von Ehlinger, Noble quickly resigned, so the full Senate never voted on the recommendation.

The House unanimously voted to expel Rep. John Green, R-Rathdrum, last year, after he was convicted of a felony in Texas. However, that action was because Green refused to resign, despite a constitutional provision prohibiting convicted felons from holding public office.