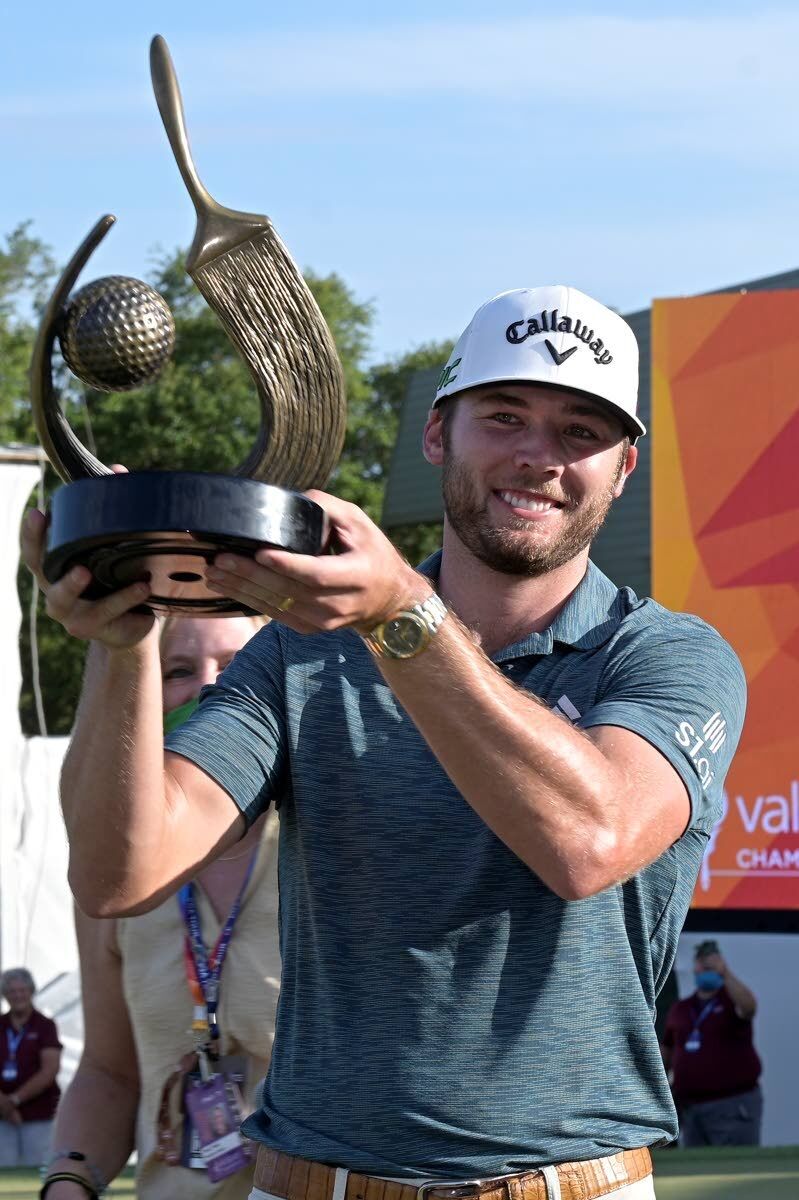 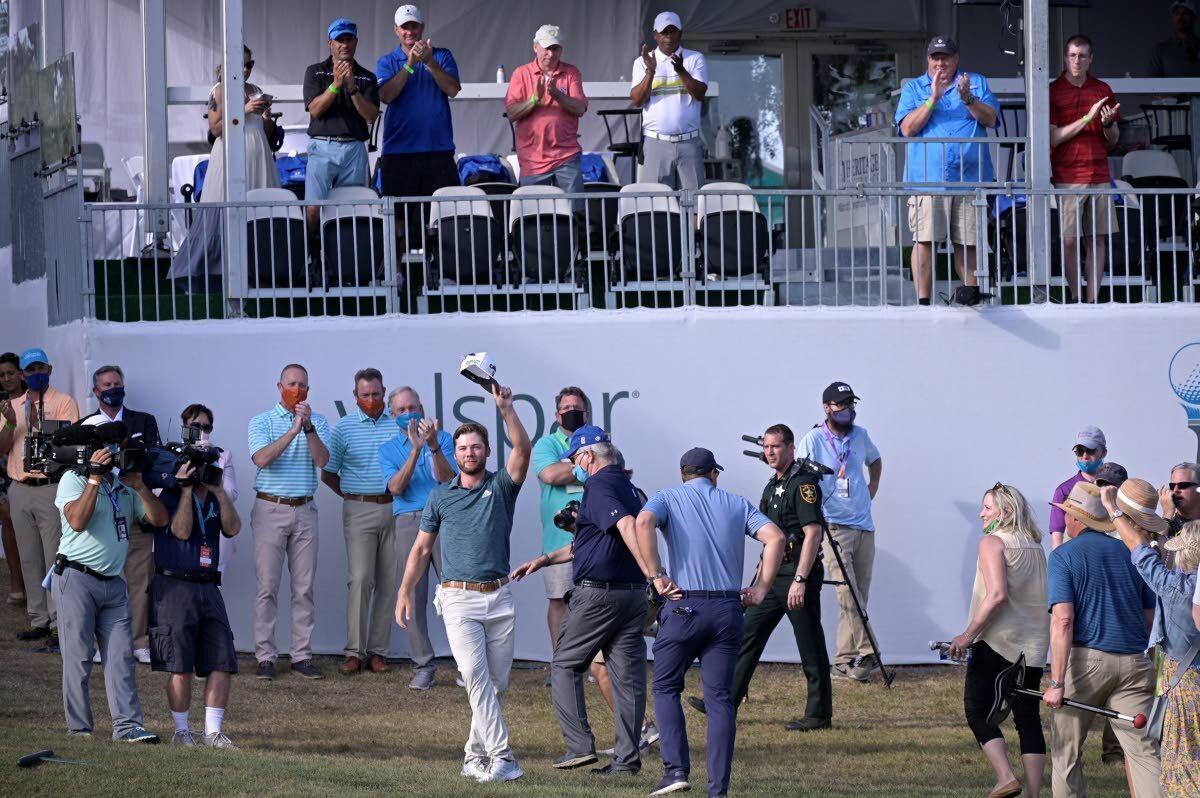 Sam Burns waves his hat to the crowd on the 18th green after winning the Valspar Championship golf tournament, Sunday, May 2, 2021, in Palm Harbor, Fla. (AP Photo/Phelan M. Ebenhack) 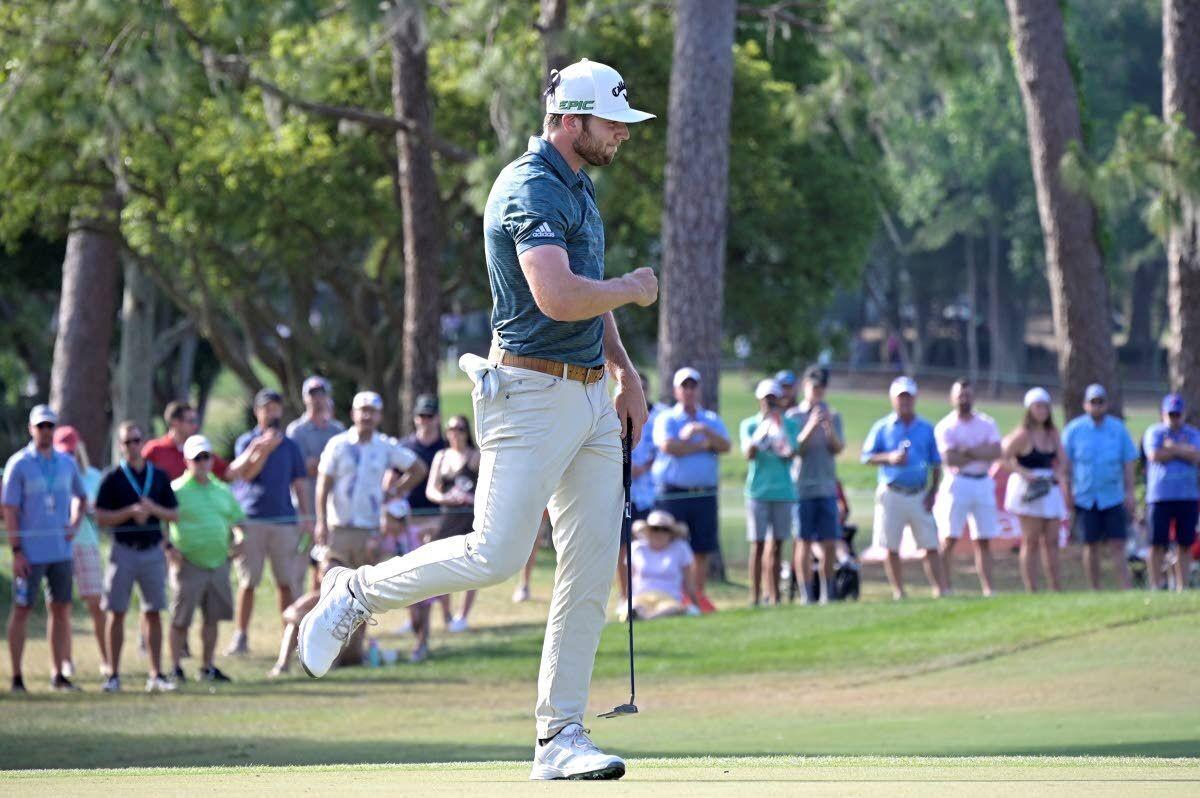 Sam Burns celebrates after sinking a putt for birdie on the 16th green during the final round of the Valspar Championship golf tournament, Sunday, May 2, 2021, in Palm Harbor, Fla. (AP Photo/Phelan M. Ebenhack)

Sam Burns waves his hat to the crowd on the 18th green after winning the Valspar Championship golf tournament, Sunday, May 2, 2021, in Palm Harbor, Fla. (AP Photo/Phelan M. Ebenhack)

Sam Burns celebrates after sinking a putt for birdie on the 16th green during the final round of the Valspar Championship golf tournament, Sunday, May 2, 2021, in Palm Harbor, Fla. (AP Photo/Phelan M. Ebenhack)

PALM HARBOR, Fla. — Eight times this season, Sam Burns has been atop the leaderboard after every round except the one that mattered. That changed, finally, at the Valspar Championship.

Burns got some help from Keegan Bradley hitting into the water on No. 13, then the 24-year-old from Louisiana took it from there with two big birdies that led to a 3-under-par 68 and a three-shot victory Sunday.

Burns won for the first time on the PGA Tour after twice failing to convert 54-hole leads in the Houston Open in the fall and the Genesis Invitational at Riviera in February.

The victory moves him into the top 50 in the world and all but assures a spot in the U.S. Open, along with his first trip to the Masters in 2022.

He had reason to think this moment could have come sooner. Burns wasted a good start at the season-opening Safeway Open. He closed with a 2-over 72 to tie for seventh in the Houston Open. He lost a two-shot lead at Riviera, coming up one shot short of a playoff.

Bradley and Burns were tied through 36 holes and 54 holes, and they stayed that way through 12 holes on another blistering day at the Copperhead course. That changed with one swing.

Bradley came up well short on the par-3 No. 13 and went into the water, leading to double bogey. Burns saved par with an 8-foot putt for a two-shot lead.

Burns followed with a wedge that stopped next to the hole for a tap-in birdie on the par-5 No. 14. He put Bradley away with a 7-iron to 18 feet for birdie.

Cameron Tringale was lurking but never seriously challenged. He shot 68 and shared third with Viktor Hovland, whose had a 65 but started too far back at the start of the day.

Max Homa briefly tied for the lead with a birdie on the par-5 opening hole. He didn’t make another birdie the rest of the day, missing several chances around the turn and ending his hopes with a double bogey on the par-3 No. 15 without hitting into the water. He shot 74.

THE WOODLANDS, Texas — Former Masters champion Mike Weir won his first PGA Tour Champions event when he held steady with pars down the stretch for a 4-under 68 and let John Daly make the final mistake in the Insperity Invitational.

Weir and Daly were tied going down the stretch at The Woodlands, which was reduced to 36 holes because of heavy rain earlier in the week.

Daly, playing in the group ahead of Weir, was posing over his 9-iron over the water to the 18th green when it came up a fraction short and splashed next to the bulkhead. He made double bogey for a 69 and had to settle for being a runner-up.

Weir, who missed birdie chances inside 10 feet on Nos. 16 and 17, watched it all unfold and knew what he had to do. He fired his approach to about 15 feet behind the hole, and pumped his fist as he walked toward the green. He wound up winning by two shots.

SINGAPORE — Hyo Joo Kim closed with an 8-under 64, then watched from the clubhouse as Hannah Green bogeyed her final two holes to hand Kim a one-stroke victory in the HSBC Women’s World Championship.

Kim finished at 17-under 271 at Sentosa Golf Club. She watched as Green, the former Women's PGA champion, took a one-shot lead to No. 17.

But the Australian three-putted for bogey to fall into a tie for the lead, then she missed the green on No. 18 and missed a par putt. Green shot 69.

Kim, the No. 9 player in the women's world ranking, captured her fourth LPGA Tour title and her first in five years. She also won a major in 2014 at the Evian Championship. Kim did not play the LPGA Tour last year while riding out the COVID-19 pandemic at home in South Korea, but she won twice on the Korean LPGA Tour.

ANA Inspiration winner Patty Tavatanakit closed with a 65 and tied for third with 54-hole leader Linx Xiyu and Inbee Park, who each had a 70.

HUNTSVILLE, Ala. — Paul Barjon of France birdied No. 17 and closed with a 1-under 69, then won a three-way playoff with an eagle on the third extra hole to capture his first Korn Ferry Tour title at the Huntsville Championship.

Barjon has won three times on the Mackenzie Tour in Canada. The victory over Billy Kennerly and Mito Pereira moved him to No. 6 on the points list and all but assures him of a PGA Tour card next season.

Kennerly closed with a 63 and was the first to finish at 15-under 265. Pereira appeared to have control until dropping shots on Nos. 13 and 14, and making pars the rest of the way for a 66.

All three made par on No. 18 on the first playoff hole, and Kennerly was eliminated the second time around with a bogey on No. 18. The playoff moved to the par-5 No. 10, where Barjon won it with an eagle.

TENERIFE, Spain — Dean Burmester of South Africa ended four years without a victory by closing with a 9-under 62 to win the Tenerife Open by five shots.

Burmester last won the Tshwane Open in 2017. Nicolai von Dellinghausen of Germany made eagle on the final hole for a 68 to finish alone in second.

Burmester finished at 25-under 259. It was the eighth victory of his career, and the first time the 31-year-old won outside of South Africa.

Kalle Samooja of Finland and Adrian Meronk of Poland tied for third at 19 under, one stroke ahead of American John Catlin.