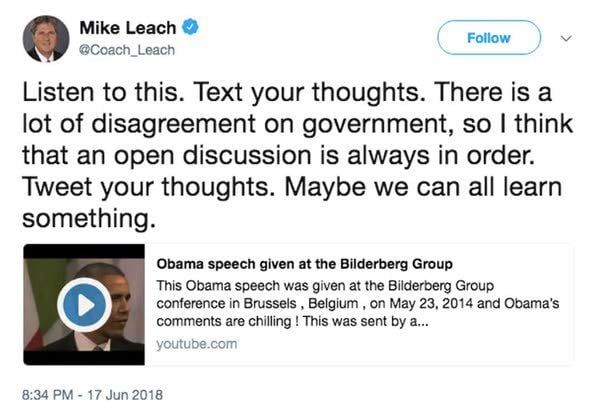 WSU Head Football Coach Mike Leach later deleted this June 17 tweet after admitting the video was incomplete in another tweet. 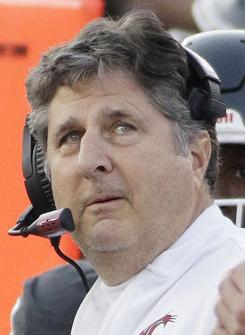 A rash of donors threatened to withhold millions in donations after Mike Leach, Washington State University head football coach, tweeted a fake video of a speech from former President Barack Obama in June, according to documents obtained through a Daily News public records request.

In the documents, several donors made it clear if Leach makes more "disgraceful" or "racist" comments, they will consider pulling back pledged donations and stop supporting the university.

In the doctored video, Obama is made out to say "ordinary men and women are too small-minded to govern their own affairs, but order and progress can only come when individuals surrender their rights to an all-powerful sovereign."

With the video post, Leach tweeted, "There is a lot of disagreement on government, so I think that an open discussion is always in order. Tweet your thoughts. Maybe we can all learn something."

When told the video was "a hoax," Leach replied in a tweet, "prove it." For several hours, Leach defended his posting.

He later deleted the tweet and tweeted: "I agree that the video was incomplete. However, I believe discussion on how much or how little power that our Gov should have is important."

The university athletic department, president's office and WSU Foundation released to the Daily News 196 pages of documents containing emails from WSU employees, many forwarding messages from angry donors. The university is still gathering the second installment of the request.

The morning after Leach's post, one donor threatened to withdraw a $1 million donation out of his or her will to the WSU Foundation if the university did not condemn the tweet. Several others followed suit. The foundation redacted the names of the donors.

"We are not happy with Leache's (sic) racist twitter activity and are withdrawing our $1,000,000.00 plus estate proceeds we gifted to WSU in our Will (sic), unless there is a much stronger response coming from the University condemning his actions. Cougs are better than this and I am extremely upset by his actions and WSU's tepid response," one donor wrote in an email to the president's office June 18.

According to an email from Trevor Durham, associate vice president for the office of strategic communications and donor engagement, to WSU President Kirk Schulz, the foundation identified at least 18 donors who required an email response in late July.

In an Aug. 1 email from Raegan Harvey, Cougar Athletic Fund director, to Michael Connell, senior associate vice president of University Development with the WSU Foundation, Raegan wrote it was unfortunate Leach's email went out after his tweet.

A donor emailed Jeff Pilcher, director of philanthropic engagement, saying he would rescind his $25,000 pledge to WSU and instead donate that money to his wife's scholarship fund at Oregon State University.

"At this point, my estate plan calls for WSU to receive about 1.6 million dollars and I hope to keep my estate plan as is. However, this type of stunt is offensive enough to me that were something like it to happen again, I would be more than willing to rededicate that portion of my estate to Oregon State University," the donor wrote.

"I will not give anything to WSU until Mike Leach is no longer associated in anyway with the university. He recently disgraced himself and the university by posting a patently false video that went beyond being merely despicable," a June 25 email to the foundation read.

"You are supporting racism and the attack on facts by employing Mike Leach. And you are a university!!!! What is education without facts???" a June 23 email to WSU admissions stated.

Durham wrote in an email to the Daily News on Thursday that private support for WSU "continues to be strong."

"Through the first three months of Fiscal Year 2019, philanthropic activity to benefit WSU students, faculty, research and programs is on pace to meet or exceed FY18's year-end total of $145.1 million," he wrote.

A July 30 correspondence from Durham to Schulz included a prepared email response the president's office could use to send to donors who responded to Leach's tweets.

The email to donors stated Schulz and Athletic Director Pat Chun planned to sit down and visit with Leach in person to "discuss the broader impacts his Twitter posting had on the university as a whole."

The email also stated the university would bring in "an outside person to work with senior university leadership and head coaches on what is the appropriate use of social media."

Weiler expressed his own disappointment in Leach's tweet in a July 3 email to an upset donor, writing he "found it deeply disturbing that a member of the Washington State University athletics department would post a doctored video on social media."

After the tweet was picked up by media outlets, Weiler said in a statement, "As a private citizen, Mike Leach is entitled to his personal opinions. Coach Leach's political views do not necessarily reflect the views of Washington State University students, faculty and staff."

In a June 20 email from Weiler to Schulz, Weiler calls the situation an "imbroglio" and was tracking how many potential people saw the story.

"Since this report was run, Leach has continued to spar with a reporter from USA Today and this has generated additional coverage in the last 12 hours. (We will run another report at the end of day today to capture the latest coverage.) As of June 19, the Leach story generated 51 mentions with a total combined reach of up to 304,000,000 potential readers," Weiler wrote.

More about the request

The names of all donors were redacted from public records. Weiler said donor names are not public information.

According to the WSU Public Records Office, "the WSU Foundation is a 501(c)(3)  organization and, as such, is not obligated to respond to public records requests made to the university. The Foundation can provide documentation voluntarily and as a courtesy to WSU, but Foundation records may or may not be provided to WSU."