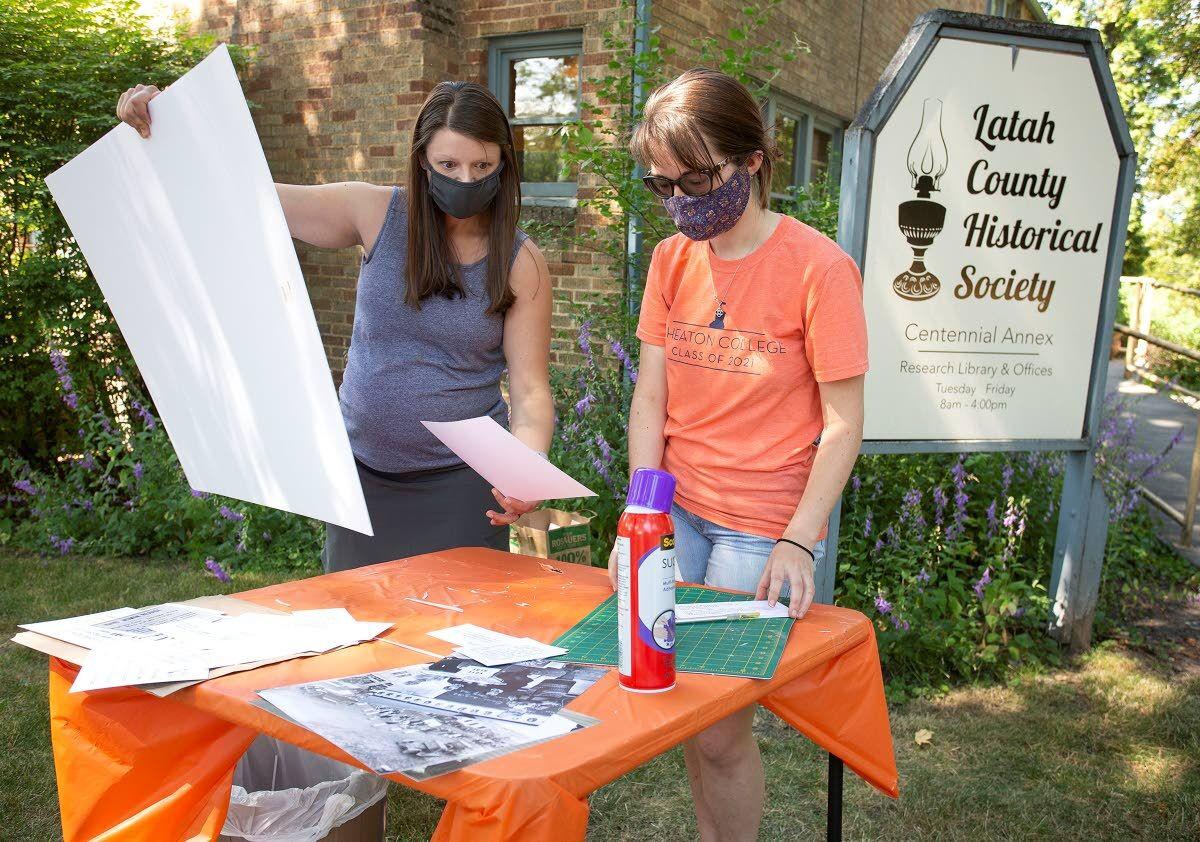 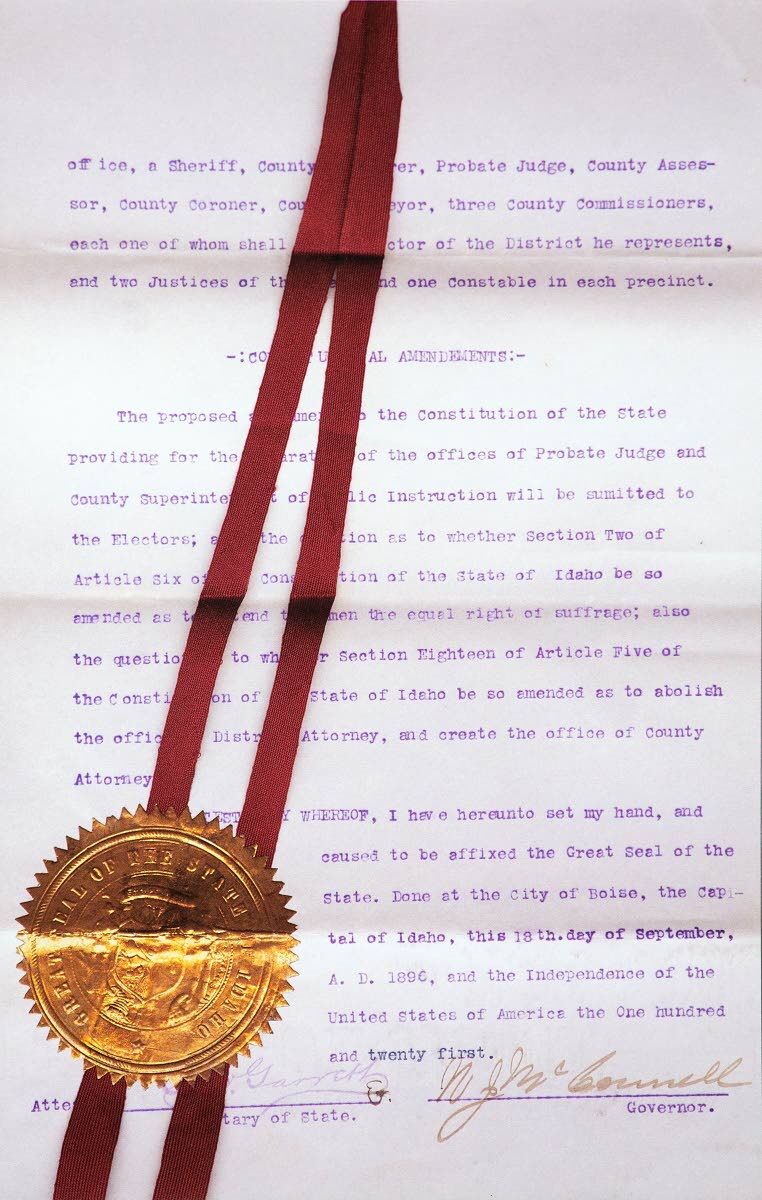 A copy of an 1896 suffrage proclamation signed by Idaho Gov. William McConnell will be part of Latah County Historical Society exhibit about women’s suffrage at the Latah County Courthouse. The proclamation proposes amending the state constitution to give women the right to vote. The amendment was passed in an 1896 ballot initiative. 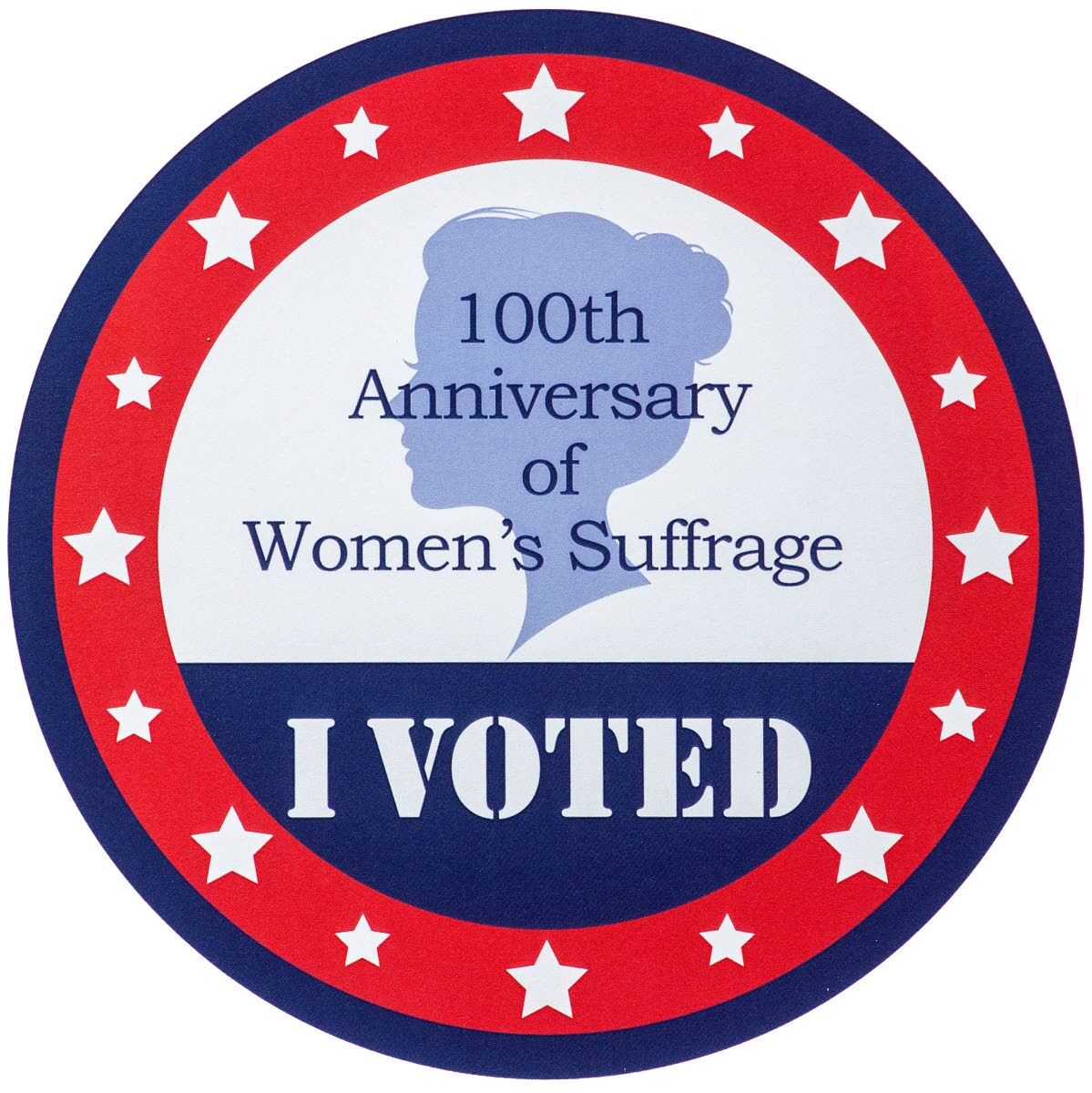 And enlarged copy of the 2020 ‘I Voted” sticker will be part of Latah County Historical Society exhibit about women’s suffrage at the Latah County Courthouse.

A copy of an 1896 suffrage proclamation signed by Idaho Gov. William McConnell will be part of Latah County Historical Society exhibit about women’s suffrage at the Latah County Courthouse. The proclamation proposes amending the state constitution to give women the right to vote. The amendment was passed in an 1896 ballot initiative.

And enlarged copy of the 2020 ‘I Voted” sticker will be part of Latah County Historical Society exhibit about women’s suffrage at the Latah County Courthouse.

The 19th Amendment was a critical milestone for women but Latah County Historical Society Executive Director Dulce Kersting-Lark said the ratification didn’t immediately grant every woman the right to vote and more still needs to be done to provide gender equity.

“We’ve made a very conscious effort in our organization to make sure that when we offer programs, when we create content, that we are commemorating and not celebrating because celebrating I think makes it feel like it was a finite mission,” said Kersting-Lark, who is also running in November for a District 5 seat in the Idaho House of Representatives. “Women got the right to vote and we should celebrate and it was all done, and that’s not true because lots of women were excluded from that part of the movement.”

Kersting-Lark, 31, of Moscow, said one example is that Native American women could not vote until 1924 when President Calvin Coolidge signed the Indian Citizenship Act, granting citizenship to Native Americans. The last state to fully guarantee voting rights to native people was Utah in 1962, but Kersting-Lark said natives were still prevented from voting because of poll taxes, literacy and intimidation.

Idaho was the fourth state in the nation to grant women the right to vote. Idaho Gov. William McConnell, who built the McConnell Mansion in Moscow in 1886, signed off on the law in 1896.

“We found out early on one of the challenges to doing a lot of very locally focused programs about women’s suffrage is that there’s just not that much information,” Kersting-Lark said. “It was seemingly not very controversial right here in Latah County.”

She said she could not think of examples in which women voters are suppressed nowadays, but there are places where it is made more difficult for working parents who have to worry about child care or who have to stand for hours in long lines for voting booths.

Kersting-Lark said voting in Idaho is extremely accessible. Voters can register on voting day at the polls or request an absentee ballot, no questions asked.

“I think the spirit of the 19th Amendment is certainly alive and well,” she said. “I am grateful for the anniversary and the opportunity to draw people’s attention to it. For some people, maybe 100 years feels like a long time ago, but right now, this moment in time 100 years ago, I could not vote in a presidential election.”

She said women worked hard to gain the right to vote, which she said is a fundamental right in a democracy.

“It seems a pretty flimsy rationale in 2020 but it wasn’t that long ago that it was actually a debate amongst people — whether women had the mental capacity to vote, whether they would be corrupted by the vote, could their bodies physically handle the stress of being a voter and going to a public polling place?” she said. “To me, 100 years ago is not that long ago so I really want people to give some serious thought about how hard it was that we fought for that and what do we think today seems natural that 100 years from now our descendants might think, ‘Oh my gosh. That seems very backwards that they believed that so wholeheartedly.’ ”

The Latah County Historical Society is sharing two copies of a poster exhibition originally curated by the U.S. National Archives. The exhibit, titled “Rightfully Hers,” commemorates the 100th anniversary of the 19th Amendment. It explores the history of ratification of the women’s suffrage amendment, women’s voting rights before and after and its impact today.

At both locations the posters are installed in exterior windows so individuals can visit at their convenience and can safely maintain social distance from other visitors.

Kersting-Lark said the historical society is trying to obtain a copy of an exhibit the Smithsonian Institute curated to install this summer in downtown Moscow storefronts.

She said a small exhibit is posted at the Latah County Courthouse in Moscow and on the historical society’s website.

Kersting-Lark said it is planning to bring a traveling exhibit about voting rights and the Civil Rights Act in November to Moscow. The intention is to create programming that links the women’s suffrage movement of the late 1800s and 1900s with the civil rights movement of the mid-20th century as well as tying in current voting rights.

Learn all about women's suffrage in the U.S.

Women were granted the right to vote 100 years ago. Learn all about it in this Premium Edition.

‘A mother’s advice is always safest’

It was 100 years ago today that 24-year-old Harry Burn helped make history by listening to his mother.